The United Nations Security Council echoed the Taliban’s call for an “inclusive” Afghanistan in a statement on Monday, calling for an “inclusive and representative” new government that includes “the full, equal and meaningful participation of women.”

The U.N. also urged the Taliban to “adhere to international norms” in its rule.

The U.N. Security Council said in a press statement on Afghanistan:

The members of the Security Council called for an immediate cessation of all hostilities and the establishment, through inclusive negotiations, of a new government that is united, inclusive and representative — including with the full, equal and meaningful participation of women.

The U.N. Security Council added that “a sustainable end to the conflict in Afghanistan can only be achieved through an inclusive, just, durable and realistic political settlement that upholds human rights, including for women, children and minorities.”

NEW: U.N. Security Council on Afghanistan: "The members of the Security Council called for an immediate cessation of all hostilities and the establishment, through inclusive negotiations, of a new government that is united, inclusive and representative." https://t.co/V02WsfhPj2 pic.twitter.com/Farr0pzjZv

“Security Council called on parties to adhere to international norms and standards on human rights and put an end to all abuses and violations in this regard,” the U.N. Security Council affirmed in its statement.

The U.N. also called for “strengthened efforts to provide humanitarian assistance to Afghanistan.”

On Sunday, Taliban spokesman and negotiator Suhail Shaheen told the Associated Press that the militants will be holding talks in the coming days aimed at forming an “open, inclusive Islamic government.”

The attempt at diplomatic language is part of a larger shift within the Taliban’s public relations to make the group appear more professional and less menacing to its neighbors, hoping to attract foreign investment and gain legitimacy. In a separate interview with the Kurdish outlet Rudaw on Thursday, the Taliban’s top spokesman, Zabihullah Mujahid, insisted that the jihadist terrorist organization “will not be violent” when it eventually takes over Afghanistan, and will treat women as sharia, the Islamic law, demands. Mujahid was responding to concerns from the Kurdish outlet that a Taliban government would torture, persecute, and otherwise repress women, which it did during its pre-2001 rule.

Washington brokered a deal with the Taliban last year under former President Donald Trump that would have seen America withdraw its military presence from Afghanistan by May 1. President Joe Biden broke the deal, insisting on staying in the country through September. Taliban jihadists responding by claiming the provisions of the deal no longer limited their violent behavior and launched a campaign to wrest the nation out of the hands of the now-former government. 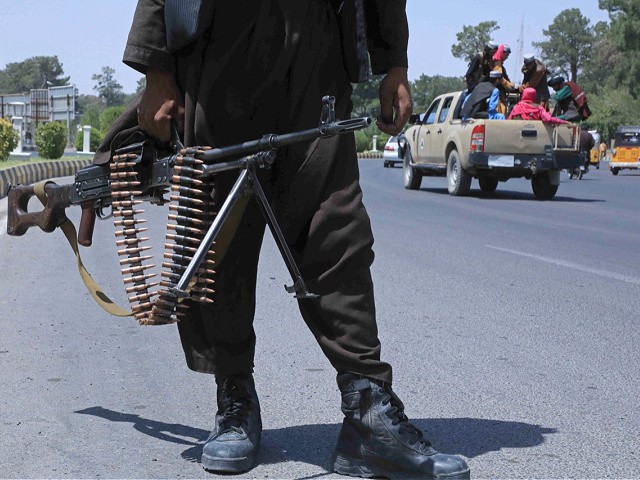 A Taliban fighter stands guard on a street in Herat, Afghanistan, on August 14, 2021. (AFP via Getty Images)

Heavily armed Taliban fighters thronged across the capital this weekend – abandoned by Afghanistan’s president, Ashraf Ghani, who fled the country with four cars and a helicopter filled with cash, according to the Russian embassy in Kabul.

Soon after that, the Taliban took control of the presidential palace while chaos ensued at Kabul’s main airport, as America’s 20-year campaign in Afghanistan came to end, leaving the country just as the U.S. initially found it in 2001: under Taliban rule.