“The government will table the issue of how to proceed with social discussions on dog meat consumption at a policy coordination meeting to be presided over by [South Korean] Prime Minister Kim Boo-kyum on Thursday [November 25],” South Korea’s Yonhap News Agency reported on November 18.

South Korea’s Office for Government Policy Coordination told Yonhap the meeting was planned after South Korean President Moon Jae-in “raised the possibility of banning the consumption of dog meat in the country during his meeting with the prime minister in September.”

“Moon is known as a dog lover, living with several dogs at the presidential compound,” Yonhap noted in September. 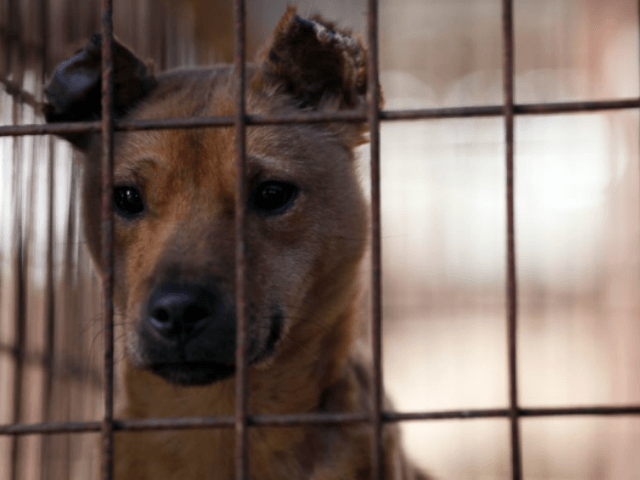 A dog with ear injuries is shown locked in a cage at a dog meat farm in Wonju, South Korea, on Monday, Nov. 21, 2016. Humane Society International treated the dog’s wounds, provided all 150 dogs with vaccinations and warm bedding, and is in the process of closing down the farm and rescuing the dogs. HSI is the leading animal welfare organization working to end Asia’s dog meat trade, including in South Korea where around 17,000 farms breed up to 2.5 million dogs for human consumption annually. (Woohae Cho/AP Images for The Humane Society of the United States)

“While dog meat is eaten by some in several countries in Asia, South Korea is the only country that intensively farms dogs for human consumption on a large scale,” the Humane Society of the U.S. reported in late May.

“An estimated 2 million dogs a year are reared on thousands of dog meat farms across the country,” according to the organization, which advocates for animal rights.

“[I]t is estimated that up to one million dogs are still slaughtered for food each year in South Korea,” the BBC noted in late September.

“South Koreans … historically regarded dogs as edible farm animals,” USA Today reported in February 2019. “Dogs were more plentiful than cattle, which were scarce and valued for farm labor such as pulling carts or plowing fields.”

Dogs are not classified as livestock according to South Korea’s 1962 Livestock Processing Act, though canines are recognized as food by South Korea’s Ministry of Health and Welfare, which states that “any edible product (except drugs) can be called food.”

South Korea has an Animal Protection Law that is “intended mainly to prevent the cruel slaughter of dogs and cats but not dog consumption itself,” Yonhap noted on November 18.

“[A] long history … suggests Koreans have been eating dogs for more than a thousand years,” according to the newspaper. “They were a familiar food source during the near-starvation years of Japan’s brutal occupation of Korea [1910-1945], World War II, and the Korean War.”

“These days, South Koreans who eat dog meat eat much of it during boknal, the hottest days of the year, in July and August,” USA Today observed in February 2019.

“Some believe consuming it revives energy or virility sapped by the heat,” according to the newspaper.