China’s state-run Global Times on Wednesday argued that political stability in neighboring Kazakhstan is a vital Chinese national security interest — even the stability of a merciless authoritarian regime with a ruler “elected” under shadowy circumstances who imprisons and kills protesting citizens to remain in power.

The Global Times said China shares this interest with Russia, which hastily dispatched troops into Kazakhstan to help put down the protests under the aegis of a regional security alliance.

China, like Russia, has many restless republics along its huge borders, and the Chinese would view an outbreak of political freedom in any of them as a security threat — a threat it accused the United States of deliberately nourishing for selfish strategic ends:

It’s quite necessary to prevent “color revolutions” and the “Three Evils” – namely terrorism, extremism, and separatism – in Kazakhstan from causing regional unrest and spillover to the surrounding regions. This is directly related to China’s national security and serves as a common task for Central Asian countries. China’s clear attitude of preventing chaos or war embodies the responsibility of a major power – that is, China will not stand by idly and let happen what are detrimental to China’s national interests and to the common welfare of the entire region.

China has the largest number of neighbors in the world, with 14 bordering China on land. It has always been China’s goal to ensure that its neighbors are free from chaos and crises that will affect China’s sovereignty, security and development interests. Allowing no chaos and war is China’s solemn attitude when it comes to matters of major security concerns threatened by disturbances from outside forces, such as issues related to the Korean Peninsula and the South China Sea. China is very prudent when dealing with international affairs and will always keep its words.

No country’s development can go ahead without stable surrounding environments. If neighboring countries fall in turmoil, become unable to maintain political and social stability, and even engage in chaos and war, their influence may spill over. The US knows this well. And it has been constantly stirring up unrest in neighbors of other big countries, while keeping stable the environment surrounding itself.

The “Three Evils” in Chinese Communist ideology are religious extremism, separatism, and terrorism. China invokes the Three Evils to justify atrocities like the genocide of the Uyghur Muslims in Xinjiang province.

The Global Times also railed against the North Atlantic Treaty Organization (NATO) for pushing east to “erode Russia’s surroundings” and using a similar tactic to weaken China’s territorial claims in the South and East China Seas.

“Quite often, Washington is behind some unrest around China,” the Global Times muttered, presenting this as an excuse for China to support brutal dictatorships against their own people while simultaneously claiming to hold “nonintervention in others’ internal affairs” as its highest foreign policy principle.

“Facts have proven that it is rare to see the US and the West not get involved in major regional crises around the world, and in many cases they are the biggest sources of chaos and war. In pursuit of geopolitical gains, they incite opposition parties and seek proxies in other countries with the superiority of ‘missionaries,’” the editorial charged.

“They even didn’t hesitate to use force to forcibly transform a society with a completely different history and cultural tradition, regardless of whether the shoes they offer fit,” the Global Times added, derisively referring to the U.S. mission in Afghanistan. 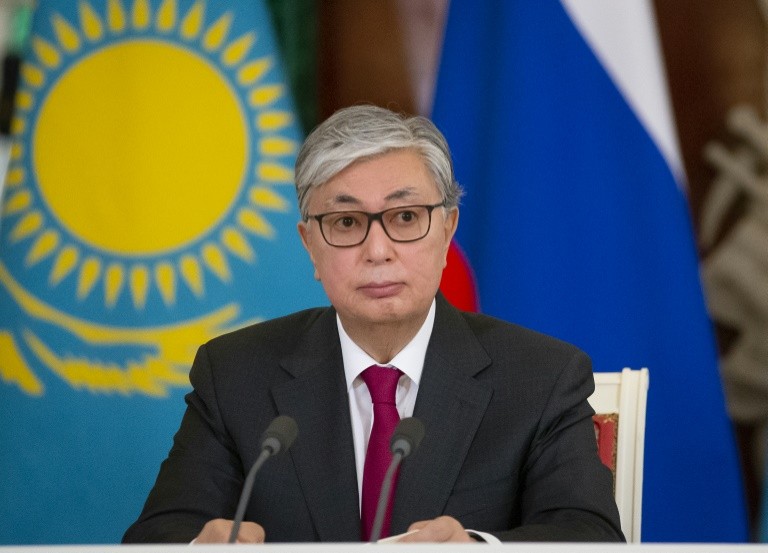 Kazakhstan’s new president Kassym-Jomart Tokayev attends a press briefing after his meeting with Russia’s president at the Kremlin in Moscow on April 3, 2019. (Photo by ALEXANDER ZEMLIANICHENKO/POOL/AFP via Getty Images)

Kazakhstan’s President Kassym-Jomart Tokayev appears to have weathered the storm of protests, granting China its wish for stable strongman rule along its borders.

The Russian Defense Ministry announced on Thursday that Russian troops have completed their mission in Kazakhstan and will soon withdraw. In harmony with China’s talk of “color revolutions” and the “Three Evils,” both Tokayev and Russian President Vladimir Putin claimed the protests were orchestrated by hostile foreign powers.

Russia’s announcement seemed like a rebuke to skeptical observers like U.S. Secretary of State Antony Blinken, who questioned the need for outside troops to reinforce Kazakh police and implied Russia was using the protests as an excuse to permanently station its troops in Kazakhstan.

Sources in Kazakhstan told the New York Times (NYT) on Thursday Russia might have preferred to keep its forces in the country for longer, but growing resentment from Kazakh citizens made withdrawal seem like a wiser policy. A political analyst in Kazakhstan suggested Russia will soon reveal the “price” to be paid for the “favor” it rendered to Tokayev by keeping him in power.

The NYT noted Tokayev and his officials have given conflicting accounts for how they believe the protests began and who was behind them, the government has not released a definitive account of how many civilians were arrested or killed, and some analysts still believe “the violence stemmed from an internal power struggle among the country’s elites.”