China’s Global Times government newspaper expressed outrage on Wednesday at the fact that the prime ministers of Japan and Britain — Kishida Fumio and Liz Truss, respectively — made time to meet with each other at the United Nations General Assembly, dismissing both countries as “little brothers” of America.

Kishida and Truss had both issued their addresses to the General Assembly’s general debate, an annual event where the world’s leaders are invited to speak on any topic they choose, by the end of Thursday. Both have been vocal critics of the Chinese Communist Party for the human rights abuses it commits against its own people and the global security threats presented by China’s incessant belligerence towards neighboring Taiwan, which it falsely claims as a province.

According to the British prime minister’s office, during their meeting, Truss “condemned China’s recent provocations over Taiwan, which threatened Japan’s Exclusive Economic Zone.” Truss and Kishida “resolved to work together to tackle the strategic threat posed by China” and agreed “on the importance of likeminded democracies working together,” according to her office’s readout.

Today I reiterated British commitment to Japan and the Indo-Pacific region in the face of authoritarianism.

I will work with Prime Minister @kishida230 to further grow 🇵 ties, including through UK membership of the Trans-Pacific Partnership. pic.twitter.com/TK1Cr9Nfkj

In an editorial on Wednesday, the Global Times described the apparently uneventful meeting at the United Nations sidelines as “petty tricks” by provocative countries attempting to “contain China.”

“Britain, which is still immersed in the long-gone glory of the ’empire on which the sun never sets,’ tends to believe it can still make a difference in international affairs,” the state mouthpiece declared. “Japan, harboring a similar intent as the UK – to become a global power and enhance its worldwide discourse power, also seems eager to contribute to expanding NATO to Asia-Pacific, especially its periphery.” 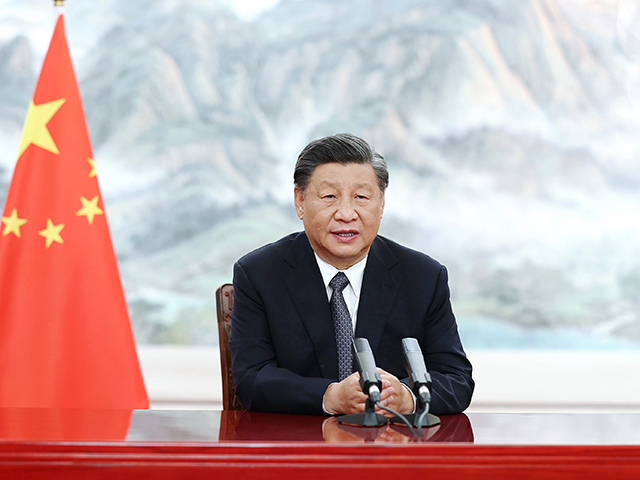 “Furthermore, leaders of the UK and Japan, ‘little brothers’ of the US, made such remarks in New York partly out of the considerations to echo US’ strategy to contain China,” it concluded.

The state propaganda newspaper repeatedly claimed that the meeting was an attempt to “expand” NATO, a military alliance that Japan does not belong to, in part because Japan does not have a military. China regularly condemns NATO as a means of disparaging the United States and the greater West, prominently blaming NATO for its ally, Russian strongman Vladimir Putin, choosing to invade and colonize neighboring Ukraine eight years ago.

“Japan and the UK are two countries particularly proactive in pushing the NATO [sic] to achieve its globalization,” a Communist Party-approved expert nonetheless affirmed, without elaborating.

The Global Times‘ attack on Truss and Kishida — and, specifically, on their decision to hold a bilateral meeting — is notable because neither prime minister used their platform at the General Assembly to discuss China specifically. Kishida mentioned reform of the U.N. Security Council, of which China is a permanent member, and contributions to a “free and open Indo-Pacific,” a term typically used to mean opposition to China’s illegal claims in the South China Sea, but did not mention China by name. Truss also failed to identify China as a particularly noxious global actor, dedicating most of her speech to condemning Russia for its ongoing invasion of Ukraine.

Truss called for the creation of an “economic NATO” to protect countries from depending on rogue human rights violators, but appeared to be referring more to Europe’s dependence on Russian fossil fuels than the world’s dependence on Chinese manufacturing.

The Global Times had similar condemnation for others who questioned its false claim to Taiwan, though at press time both the newspaper and other publications in China’s stable of government media articles have ignored the repeated calls by Taiwan’s allies at the General Assembly to allow the island nation membership in the U.N. The Global Times instead directed its disgust towards leftist American President Joe Biden, who barely mentioned China in a speech heavy on support for Ukraine.

“We seek to uphold peace and stability across the Taiwan Straits. We remain committed to our One China policy, which has helped prevent conflict for four decades. And we continue to oppose unilateral changes in the status quo by either side,” Biden said at the United Nations on Wednesday, referring to America’s policy of refusing to recognize that Taiwan is a country to placate the Communist Party.

The Global Times described this bland passing comment as “hyping” tensions around Taiwan.

“Observers,” the state newspaper claimed, referring to regime-approved commentators, “said the US is walking toward a dead end in hyping the Taiwan question as most of its diplomatic statements and warships’ transit of the Taiwan Straits with its allies only served as political shows, and US’ related hype and possible more moves during UN General Assembly will have little positive response as the one-China principle is an international consensus.”

The propaganda outlet claimed China was “increasingly taking an upper hand” against Taiwan and that, in the event of a Chinese invasion of the island nation, America could not play “any” role to oppose Beijing.