FALFURRIAS, Texas—Human smugglers stuffed 33 illegal aliens inside a refrigerated tractor trailer in an effort to bypass U.S. Border Patrol Agents. The arrest took place on Friday at the Border Patrol checkpoint in Falfurrias, which is about 80 miles north of the Texas border.

Court records obtained by Breitbart Texas revealed that on Friday, Heriberto Soto drove his 2006 tractor trailer to the checkpoint, claiming he hauled a load of produce. Initially, Border Patrol agents did not notice anything wrong and were about to wave him through.

However, a Border Patrol canine alerted his handler that there was something off about the truck and the agents ordered Soto pull over to further inspect the vehicle. Initially, Soto tried to play dumb and was going to drive off but then stopped. When the agents opened the truck they found 33 illegal aliens lying on boxes of produce. 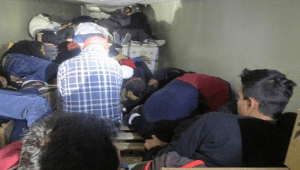 The agents noted that the trailer was refrigerated and the temperature inside the trailer was about 53 degrees. Once in custody the illegal aliens told authorities that they had been inside between one and two hours and, in addition to the cold temperatures, they actually feared for their lives.

On Monday, Soto went before U.S. Magistrate Judge Jason B. Libby who formally charged him with one count of human smuggling and ordered he be held without bond.

The arrest of the 33 illegal immigrants inside a trailer comes just weeks after Texas authorities rescued close to 40 illegal aliens who had been stuffed in a similar trailer near the Texas town of Frio, as Breitbart Texas’ Bob Price reported. In that case the refrigerator remained off, subjecting the individuals inside to very hot temperatures and leaving them near death.