#MillionStudentMarch activists want their demands met now — free college, the dissolution of all existing college debt, and a $15 per hour minimum wage for campus workers. They plan to demonstrate for this economic justice on campuses nationwide Thurs., Nov 12, emboldened by a perceived victory of forcing out the University of Missouri’s president through student protests.

They roared on Facebook: “This is PROOF that when we strike, we win!,” referencing the consolidated student hunger strikes over purported racism that led to President Tim Wolfe’s resignation. Million Student March asserts 100 campuses nationwide will participate in their  Nov. 12 day of social justice fueled by crushing student debt, the mantra of solidarity and the heartbeat of socialism.

College, they say, is a basic human right, not a privilege. The Million Student March website gripes: “The United States is the richest country in the world, yet students have to take on crippling debt in order to get a college education. We need change, and change starts in the streets when people demand it. With students, college graduates, and workers united we can build a movement capable of winning debt-free college for all and a $15 minimum wage for all campus workers!”

U.S. college student loan debt exceeds $1.3 trillion, topping credit cards and auto loans, only second to home mortgages. The Wall Street Journal says the average student owes over $35,000 in loan debt by the time they graduate. Keely Mullen, one of the national event organizers, laments her anticipated $150,000 loan debt post-graduation. She insisted the only way to be competitive in today’s job market was to “take on an enormous amount of debt in order to get a college degree.”

She told U.S. Uncut students plan to cross-organize with other activist groups as part of their activism. “The student movement will have to link arms with labor unions, the national Fight for $15, the Black Lives Matter movement, and all other progressive social movements.” She added: “It won’t be quick or easy, but the power of the people united around clear and just demands is capable of achieving anything.”

More cross-pollination comes from pro-Palestinian groups like Community College of Philadelphia – Students for Justice in Palestine and the Center for Education Policy Advocacy (CEPA)‎ at the University of Massachusetts. CEPA plans to fold anti-Israeli sentiments into a protest, demanding UMass divest out of Israel and remove Sabra products from campus retailers “because we shouldn’t have to fund a a violent and illegal occupation.” 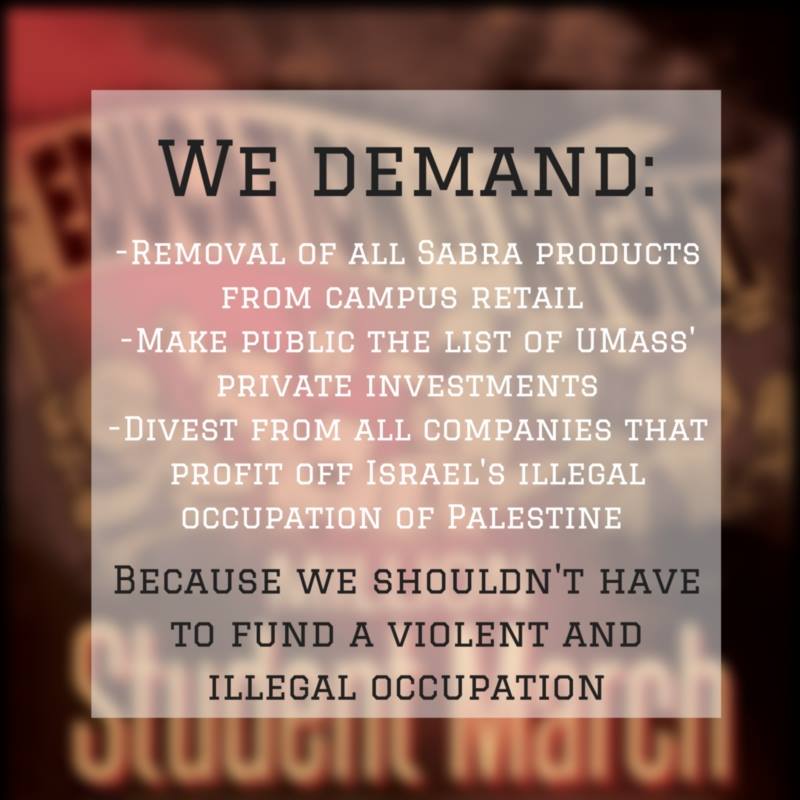 While Axelbank says they do not put all their eggs in one basket, the Sanders is the Democratic presidential candidate running in a “bold call for a political revolution against the billionaire class.” Sanders’ call for tuition-free public college, $15 minimum wage, universal health care, and taxing the rich excites socialist millennials. Axelbank pointed out the Democratic presidential candidate frontrunner Hillary Clinton only proposed “debt-free” college.

Mullen and Axelbank blamed Congress for 2013 legislation that “doubled the interest rates for federal student loans.” They balked at corporate America but neglected Big Education’s role in the student loan crisis and programs like President Obama’s college-centric North Star campaign and Mrs. Obama’s Reach Higher and millenial-driven Make Better Room initiatives, which preach the gospel of two and/or four year college degrees. Not only does it seem that all kids must go to some form of higher public education, they are on a 2020 presidential timeclock to get to the top of an international heap where the U.S. possesses the largest college graduate population and conceivably, the most debt.

In September, Obama unveiled his College Promise Advisory Board, part of his free, two-year college push and announced “earn to learn,” a $175 million federally funded apprenticeship grant expansion by the Department of Labor that is part of the Obama college-or-bust education pathway. Two of the 32-person appointed board members are  pro-Common Core teacher union bosses Lily Eskelsen Garcia (NEA) and Randi Weingarten (AFT). Both endorsed Clinton for president.

A well fleshed out online organizing guide walks group leadership through 17 steps of planning, activating and leaving a lasting impression from protesting, including social media relevance: “…a primary message related to universal or human rights –‘Education is a Right!’ — as opposed to messaging around the fast changing winds of national politics, will ensure that your efforts do not expire after the next election cycle.”

It cites among recommended #MillionStudentMarch resource materials Saul Alinsky’s Rules for Radicals, ACLU Rights of Protestors,  Black Panther Party for Self Defense, Teaching with the Black Panthers’ Ten Point Plan, Pedagogy of the Oppressed, Jemez Principles for Democratic Organizing; Tools for Radical Pedogogy, General Assembly U.N. procedures, 198 Methods of Non-Violent Resistance, and even films like Berlusconi’s Mousetrap, the play-by-play retelling of Italian protests against the G8 in 2001, and the Wikipedia version of the First Amendment to the U.S. Constitution.