Federal officers with U.S. Customs and Border Protection (CBP) stopped the attempted smuggling of over a half-million dollars’ worth of methamphetamine and cocaine at a Texas port of entry.

Officials released information on Friday about a weekend drug seizure at the Del Rio Texas Port of Entry. On May 14, a Volkswagen sedan was crossing from Ciudad Acuña, Coahuila, Mexico. Drug smuggling in the Mexican state of Coahuila is tightly controlled by the Los Zetas drug cartel.

During an inspection, officers found twenty packages they suspected to be filled with narcotics, information provided to Breitbart Texas by the CBP revealed. The packages allegedly contained forty-one pounds of methamphetamine and twelve and one-half pounds of cocaine. The combined street value was estimated to be $575,525. 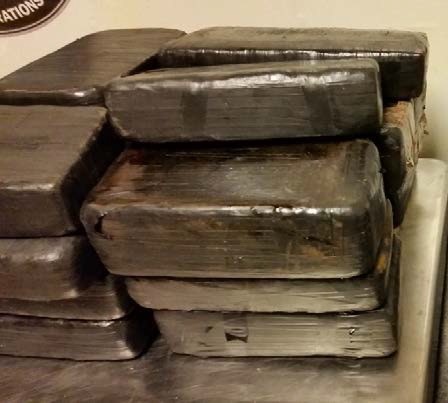 The driver and passenger, whose names and nationalities were not revealed by officials, were “processed according to CBP guidelines.

“I commend our frontline CBP officers on this interception of hard narcotics,” Del Rio Port of Entry Port Director Alberto D. Perez said in a written statement. “Keeping illicit drugs from entering our communities is one of our key missions.”

In February, Breitbart Texas Managing Director Brandon Darby and border investigative reporter Ildefonso Ortiz reported on the ruthless nature of the Los Zetas drug cartel. The article followed a tour deep into the state of Coahuila where the two journalists uncovered a system of brutal disappearances carried out by the cartel using makeshift ovens, some in government facilities such as prisons, to dispose of their enemies.

Some aspects of the massacre in Coahuila have seen the light of day through some national Mexican news outlets like Proceso, though the case has been largely ignored by Mexican mainstream media as well as mainstream media in the United States and elsewhere. Some outlets like Aljazeera America and San Antonio Express News have reported on the disappearances; however, the link to the Los Zetas having complete control of the Piedras Negras prison and turning the facility into a crematorium had gone largely unreported. Breitbart Texas began to ask questions and received hard answers about the impunity with which Los Zetas operated and the horrors that took place in that prison in late October. In late January, El Diaro de Coahuila also got some answers as to what really happened inside the Piedras Negras prison. According to information provided by Mexican authorities, Los Zetas had full operational control of the prison to the point where they took more than 150 individuals to the prison who were then tortured, murdered and incinerated. Despite the brutality of the case, major U.S. TV and print outlets have largely ignored the kidnapping and murder of hundreds of people from Allende, Coahuila.

During Mexico’s unknown massacre, Los Zetas carried out a systematic extermination by killing and incinerating more than 400 people in Allende and the surrounding towns. While details about what actually happened have barely begun to see the light of day, the massacre traces its roots back to March 2011.

Earlier this month, CBP officials in Laredo seized over a half-million dollars’ worth of marijuana in a tractor-trailer crossing the bridge from Nuevo Laredo into Texas. The trailer was also loaded with pallets infested with wood-boring worms that could have been devastating to the U.S. forestry industry had they passed through unchecked.

“Our frontline CBP officers and agriculture specialists at World Trade Bridge worked together and seized a sizable load of narcotics and intercepted a wood-boring pest all in one fell swoop,” Laredo Port of Entry Port Director Gregory Alvarez said at the time in a written statement. “These dual interceptions underscore the importance of the border security and agriculture missions that CBP carries out on daily basis.”