The president of a leading organization dedicated to supporting the families of North Texas first responders suffering death and grave injury on duty offered only three words for Cleveland Browns running back Isaiah Crowell after his social media post depicting a police officer getting his throat cut went viral: I forgive you.

Dallas Police Department Sergeant and President of the Dallas Fallen Officer Foundation Demetrick Pennie told Breitbart Texas that he understands and forgives Cleveland Browns running back Isaiah Crowell after his Instagram post graphically depicted a police officer getting his throat slit by a militant, black-clad individual. Crowell subsequently deleted the post, yet it became a viral sensation all the same.

Posted and then deleted from Isaiah Crowell’s Instagram. pic.twitter.com/5gquTsL1Qc

Sergeant Pennie explained that after his own initial outrage, he invited Crowell to attend the funeral of Dallas Police Officer Patrick Zamarripa and meet other officers directly affected by the downtown ambush. Face to face, Crowell was overcome with emotion and allowed himself to connect with Pennie. The Dallas sergeant explained that although the social media post offended, police should not lock critics out of a dialogue.

“It’s important for the police to start opening a dialogue – just because you did something wrong and bad by all accounts and now you want to talk about it, let’s talk about it,” Pennie said.

Sergeant Pennie’s organization published a lengthy post on its Facebook page Monday noting that Crowell claimed he originally posted the violent image “based on the constant provocative rhetoric that spewed through the media on a daily basis.” The parties’ ability to come together and reach forgiveness and understanding was “reflective of the truest meaning of ‘Community Policing,’” Pennie wrote. The post compared Crowell’s visit to “Daniel entering the Lion’s Den” yet “by the grace of God, he was accepted with open arms.”

The Cleveland Plain Dealer reported that following his social media outburst, Crowell donated $35,000 – roughly a Sunday’s pay – to Dallas officers’ families in need. The Dallas Police officer explained Monday that after meeting with the NFL player personally, a number of widows shared Pennie’s sense of forgiveness.

Pennie shared with Breitbart Texas his own challenges of being a black police officer from a neighborhood and family that distrusts law enforcement. During various high-profile episodes of officer-involved shootings of black individuals, he still struggles to maintain a fruitful conversation with relatives about the matter.

“We don’t talk about certain things – I’m in and then I’m out. I love you, but I’m going to love you from afar.”

Despite Pennie’s “shared socialization” with Crowell to distrust law enforcement from an early age growing up in Houston, he dedicated his life to the profession at age 17 when he personally witnessed his cousin’s murder. The sergeant told Breitbart Texas that he wanted to share the comfort and peace he felt with others, just as first responders did for him at the time.

The Dallas Fallen Officer Foundation formally resumed operations in 2015 and received its IRS designation as a 501(c)(3) charitable organization that same year. Based on current fundraising figures, the organization plans to give $50,000 to each of the five families who lost officers in the line of duty in July. Sergeant Pennie explained that a steady stream of well-wishers and contributors of all demographic backgrounds have visited to personally lend a helping hand. 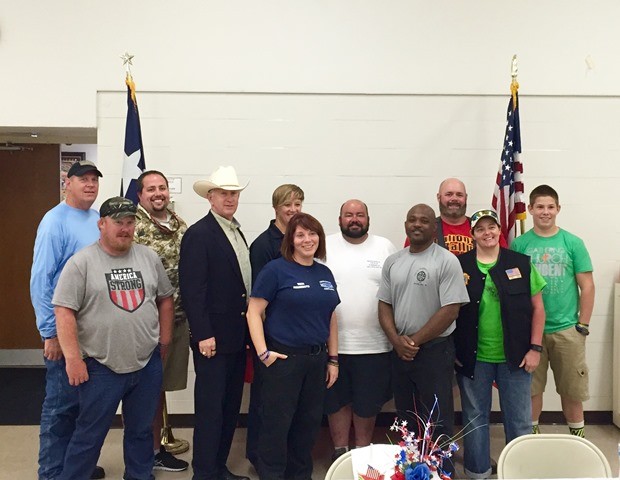 Bikers Backing the Blue from Oklahoma

Sergeant Pennie concluded that the experience “demonstrates that mutual understanding is possible as long as both parties are willing to listen.”

Logan Churchwell is the assistant editor and a founding member of the Breitbart Texas team. You can follow him on Twitter @LCChurchwell.