REYNOSA, Tamaulipas — A leaked video taken by citizen journalists revealed the way cartel gunmen board passenger buses in order control the flow of illegal immigrants to the Texas border.

The video was recently taken on board a passenger bus traveling from the border city of Reynosa to Miguel Aleman, along the highway known as La Ribereña. That highway is considered to be one of the most prized properties of the Gulf Cartel since it gives them direct access to the Rio Grande. What makes the region even more prized to the cartel is the lack of physical barriers and the lack of manpower patrolling the area that gives drug and human smugglers easy access into Texas.

In the video, a young man is seen calling on a phone to his bosses after having exchanged words with a passenger. A large man in a white t-shirt with a rifle across his shoulder boards the bus and questions the the passenger.

The passenger claims to be headed to Miguel Aleman but the gunman asks for a keyword and tells him that all travel arrangements must be made in Reynosa. The passenger is ordered to call whoever made the travel arrangements. The video then cuts off without revealing what happened to the passenger. What the video does reveal is the impunity with which the Gulf Cartel is able to operate despite the ongoing presence of military personnel and police forces on the Mexican side of the border. 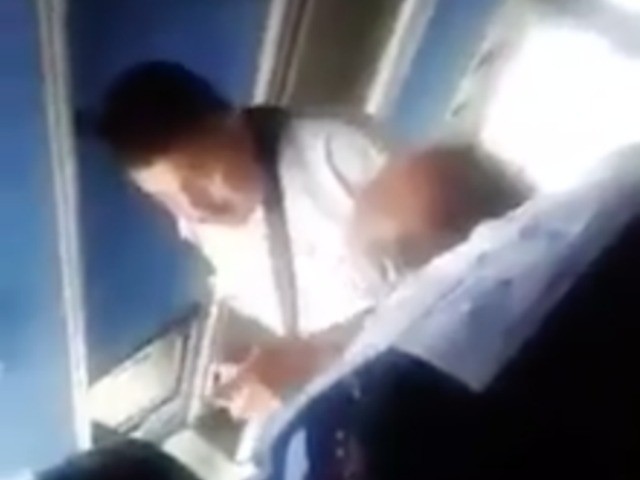 The lawlessness represented by the way the Gulf Cartel set up a roadblock and boarded the bus revealed that the many assurances routinely given by the Mexican government as to the highways in Tamaulipas being safe are completely false. Mexican law enforcement sources consulted by Breitbart Texas revealed that the Gulf Cartel continues to control the flow of illegal immigrants from the Mexican border into Texas. Independent human smugglers are not able to operate in the Gulf Cartel’s territory and if they do they risk fatal consequences.

In order for an illegal alien to get to the northern Mexican border they have to have made prior arrangements and payment with cartel members in Reynosa, law enforcement officials revealed.  As seen in the video, the illegal immigrant is then given a keyword granting him passage to Miguel Aleman, the current hotspot for human smuggling.

Editor’s Note: Breitbart Texas traveled to the Mexican States of Tamaulipas, Coahuila and Nuevo León to recruit citizen journalists willing to risk their lives and expose the cartels silencing their communities.  The writers would face certain death at the hands of the various cartels that operate in those areas including the Gulf Cartel and Los Zetas if a pseudonym were not used. Breitbart Texas’ Cartel Chronicles are published in both English and in their original Spanish. This article was written by “A.C. Del Angel” from Reynosa.