The dead bodies of 53 illegal immigrants have been found in one Texas county after crossing the border this year. The remains of the 53, mostly Mexican and Central American nationals, represent an increase over 2015 numbers despite an effort by local, state, and federal law enforcement officials.

The Brooks County Sheriff’s Office informed Breitbart Texas on Thursday night that they had recovered the remains of yet another dead illegal immigrant in the fields of a ranch located roughly 80 miles north of the Mexican border. Brooks County is not a border county but is the location of a Border Patrol checkpoint on one of the main human smuggling routes from to inland cities like Houston, San Antonio, and Dallas. These cities are transportation hubs for the human smuggling networks operated mostly by Mexican drug cartels.

“The surge of illegal immigrants coming up from the border is once again resulting in an increase in deaths,” Brooks County Sheriff’s Office Chief Deputy Benny Martinez told Breitbart Texas in an exclusive interview. “What is happening to these people is truly a humanitarian crisis.”

Martinez, who will become the next sheriff of Brooks County in January, said there has been an increase in law enforcement manpower in the county as the U.S. Border Patrol and Texas Department of Public Safety have both stepped up their efforts. “We have seen more and more apprehensions in the county because of more search efforts by these agencies. Rescues are on the rise but the numbers of people trying to cross around the checkpoint continues to lead to death.”

The Border Patrol operates a checkpoint in the middle of Brooks County on Highway 281. Human smugglers attempting to move their cargo northward must either smuggle the illegal immigrants through the checkpoint or, move them on foot around it through neighboring ranches. Forced marches through very hazardous conditions are what has led to the deaths in most cases. In addition to the heat and lack of water, the smuggled aliens must also travel through terrain consisting of sand so soft that 4-wheel-drive vehicles can get stuck. They must also avoid poisonous snakes, scorpions, cactus and thorns – all of which can debilitate a hiker, causing the coyotes to abandon them. 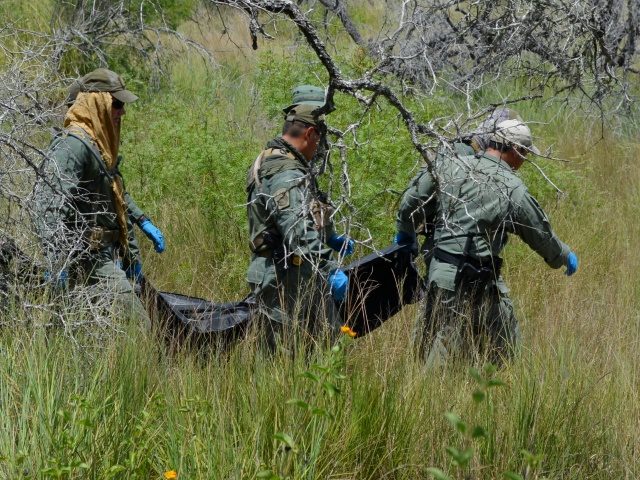 “These coyotes are ruthless, callous people who care nothing about what happens to the people they are moving through our county,” Martinez explained. “If you can’t keep up with them on the trail because you have become injured, dehydrated, overheated, or exhausted, they just abandon you and leave you to die.”

Breitbart Texas has been extensively reporting on the efforts of law enforcement to save lives in Brooks County and the atrocities committed by the human smugglers in the area. Throughout the heat of the Texas summer, Border Patrol agents and other law enforcement officers put their own lives at risk to try and find these people in the ranches before they die.

In July, Border Patrol agents rescued nine people in one week in Brooks County and the neighboring Kenedy County which also has a checkpoint on Highway 77. Agents in Falfurrias (Brooks County) received a 911 call from an illegal immigrant who had been abandoned. He reported to be in need of medical attention, information provided by U.S. Border Patrol to Breitbart Texas in July revealed. Border Patrol agents in the field obtained assistance from a Customs and Border Protection Air and Marine Operations (AMO) helicopter and located the distressed alien. He was eventually transported to an area hospital for evaluation and treatment.

Efforts by Border Patrol agents that same week in Kenedy County led to the rescue of six illegal immigrants who had been left to die in the brush. Border Patrol officials reported a 54 percent increase in the number of rescues within the region at that time.

It is not just the illegal immigrants in the ranch fields that are in danger. Coyotes will also stack illegal immigrants like cord wood in the hot trailers of 18-wheelers and try to smuggle them directly through checkpoints. They also pack them on top of each other in the trunks of cars putting them in danger of injury or death from heat exhaustion or a crash. 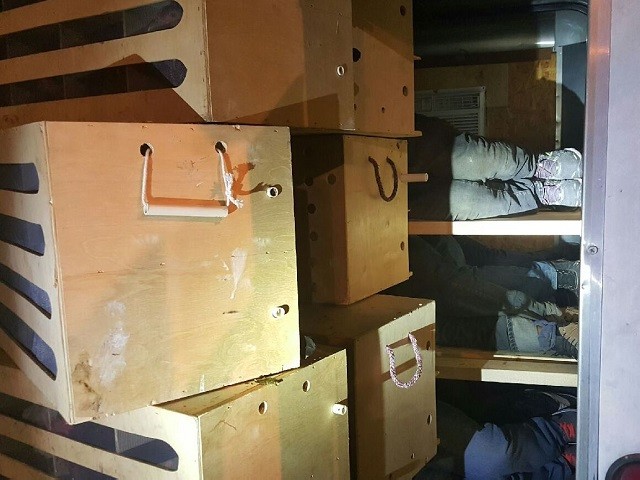 “The treatment of these illegal immigrants by their human smugglers is horrific,” Martinez told Breitbart Texas at the time. “The people they take on these marches around the checkpoint are ill-prepared for the heat and hazardous terrain of these ranches. When they can’t keep up, they are left behind where they will die quickly if they don’t get help.”

Martinez praised the efforts of the Border Patrol agents and Texas DPS troopers who work tirelessly alongside his staff. “The numbers of apprehensions are up, our success rate of identifying remains are up, but unfortunately, the number of deaths is also up,” Martinez said Thursday. “There are just too many people flooding into our county from the border. We need more help.”