HOUSTON, Texas — The head of a national and state pastors organization based in Houston said, “I can’t believe I’m saying this, but Georgia’s demand is even worse than when the Mayor of Houston demanded 17 different categories of materials, including sermons, from the seven of us.” The pastors say they are outraged about the State of Georgia asking for copies of a pastor’s sermons in litigation there.

Lawyers for the State of Georgia have called for production of sermon notes and related matters from a pastor who sued them for anti-Christian discrimination after he was fired from his public sector job. Dr. Eric Walsh worked for the Georgia Department of Public Health (DPH) as the state district health director at the same time he was an associate pastor at a Seventh-day Adventist church. The black pastor, who is also a medical doctor who served on President Obama’s Advisory Council on HIV/AIDS, was fired on May 16 after officials reviewed some of his sermons, as reported by Breitbart News. He had worked there for two years. 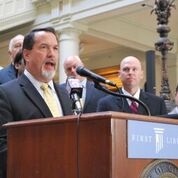 Pastor Dave Welch, executive director of U.S. Pastor Council and Texas Pastor Council told Breitbart Texas, “This poisonous mindset that has contempt for religious liberty and the Constitution crosses across geographical and partisan lines.” He continued, “If this can happen in a Bible Belt state with a Republican governor, it can happen anywhere.”

As followed and reported by Breitbart Texas in 2014, a group of pastors in Houston had to fight efforts by the City to subpoena their sermons and their private communications with church members. The subpoenas were related to litigation stemming from a petition to repeal openly gay Mayor Annise Parker’s controversial Houston Equal Rights Ordinance (“HERO”). Breitbart Texas reported that among other concerns, the ordinance, dubbed the “Bathroom Ordinance,” was strongly condemned for allowing biological men in women’s restrooms.

The pastors were active in fighting the ordinance, and eventually successful in defeating the former mayor’s “personal” project. She called the campaign against her pet ordinance a “calculated campaign of lies” and blamed area pastors and their messages from the pulpits of churches.

Breitbart Texas was at the press conference in October 2014 when Houston area pastors held a press conference with Texas Senator Ted Cruz where they lambasted the City of Houston and Mayor Parker’s “unchecked government power” and “assault on religious liberty.” The event attracted a large press corps after the City of Houston received national attention after issuing the subpoenas to the pastors. Media outlets, including Breitbart Texas, reported that the City issued subpoenas to Houston-area pastors. The subpoenas were for notes, sermons, and communications with congregants. Hundreds of concerned citizens and congregants of all nationalities and faiths attended the event which at times, seemed more like a prayer meeting. Cruz told the attendees, “Caesar has no jurisdiction over the pulpit,” and “When you subpoena one pastor, you subpoena all pastors.”

Cruz stood with pastors from Houston mega-churches, including Second Baptist’s Dr. Ed Young, and First Baptist’s Pastor Gregg Matte, as well as many others of different races, nationalities, and denominations. He called the City of Houston’s actions a “stunning, undeniable, unconstitutional, abuse of governmental power by a city administration.” Cruz compared the city’s actions with that of the Internal Revenue Service and said the City’s actions were “part and parcel of the same explosion of government power” that has been occurring in the federal government.

Welch said the situation in Georgia was even worse than what happened to them in Houston. He explained, “First, this is state government coming after a pastor, not just a rogue mayor in one city. Also, the State is demanding much more material: sermons, sermon notes, all documents without even topical or time limits. It could even include margin notes in this Pastor’s preaching Bible. It’s almost as if they are ransacking the Pastor’s study. This sweeping demand is ominous and a threat to every pastor, every church, every denomination, and every citizen of faith in America.”

Pastor Welch went to Georgia to support Dr. Walsh and spoke during a press conference there with Walsh’s lawyers from First Liberty Institute.

“It’s bad enough he was fired for his faith, but this legal demand for all his private pastoral documentation takes this to a whole new level. It is a wake-up call to see this kind of hostility to pastors rising in America. We stand with Dr. Walsh, a brave man of faith, and urge all pastors to do the same,” Welch said.