UPDATE: 11 a.m. local time: The suspect was originally reported by sheriff’s deputies as being critical. Harris County Sheriff’s Office Sergeant Cedrick Collier updated that information stating that the suspect, described as a 21-year-old black male, was in stable condition in the emergency room (ER) at North Cypress Hospital. The suspect was shot multiple times by deputies, but sustained non-life threatening injuries. Collier spoke to reporters at a press briefing attended by Breitbart Texas. 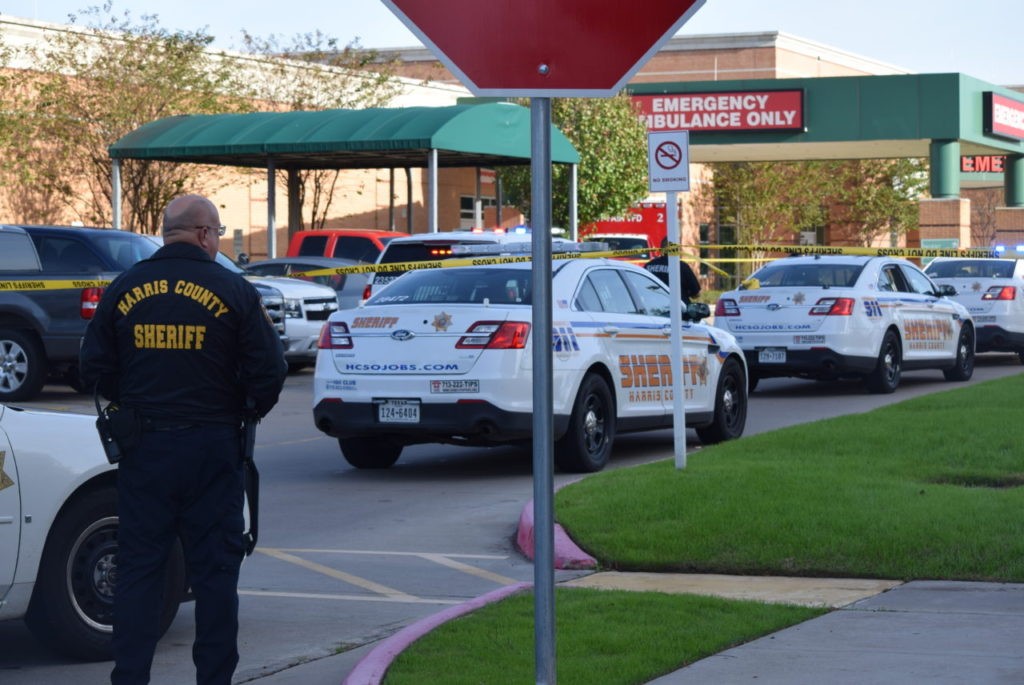 Collier said the suspect had been admitted into the ER as a patient before the incident began. He became impatient about seeing a doctor. Eventually, he walked out of his room and confronted the receptionist, pulling a gun and yelling. He fired several shots in the air, inside the ER reception area. Despite numerous patients and ER staff being present, no one was struck by the gunfire, Collier said.

The receptionist took cover behind her desk and called for security to respond. The suspect walked out of the ER into the driveway area where ambulances arrive to unload patients. Two off-duty sheriff’s deputies, who were working an off-duty security job, arrived and followed the suspect out the door, Collier stated. The deputies ordered the suspect to stop and drop his weapon. The suspect turned towards the deputies, Sgt. Collier continued, and refused to drop the weapon. Collier described the handgun as a black pistol, either .40 or 9mm caliber. 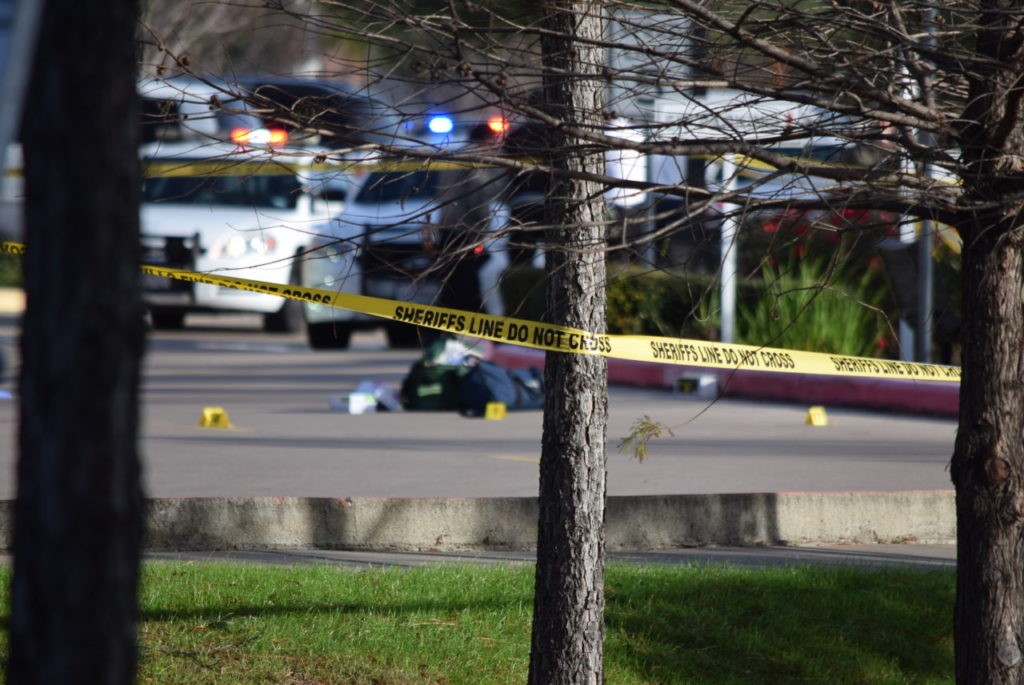 “Both officers discharged their weapons striking the male several times,” Collier told reporters. “The suspect is currently in the ER in stable condition with no life threatening injuries.

The suspect, whose identity was not released at this time, has no criminal history in Harris County, Collier said. He was not aware of what the suspects ailment was that brought him initially to the ER. He said the suspect was highly irritated at not seeing a doctor, but he did not know how long the suspect had been waiting. There were several patients in the ER at the time. All ER rooms were full.

Both deputies fired shots at the suspect. The suspect was shot in the shoulder, leg and lower leg area, he explained. Collier descibed the deputies, saying that one was a “senior officer with the department,” and the other was a three-year veteran. 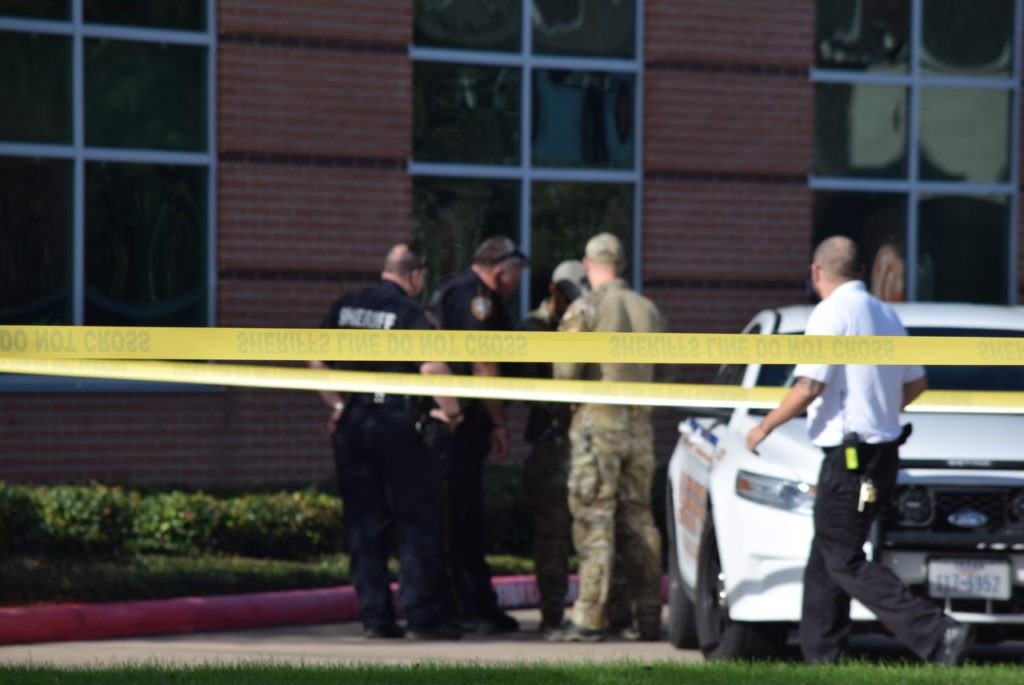 Deputies from several tactical and investigative teams converged quickly on the hospital after the shooting. (Photo: Bob Price/Breitbart Texas)

Collier said we were “very lucky that nobody was killed.  We were very fortunate that the staff was not injured. We were fortunate that our quick response by the deputies that were working here and the district units that responded to make sure there wasn’t an additional shooter and brought the situation to somewhat of a safe conclusion.”

The sergeant said the suspect was still being combative in the ER.

“We ask that you pray for our officers,” Collier requested. “This is a traumatic situation. They’re okay, but discharging a weapon at a human is not a natural instinct. They’re talking to their families.” He said the deputies will be placed on administrative leave pending the outcome of the investigation into the shooting. This is standard protocol following an officer-involved shooting.

“We ask that you pray for them and their families,” he said.

The incident happened about 40-50 feet outside the entrance to the ER. “You have to keep in mind there are multiple buildings around this area,” Collier explained, “so they couldn’t allow this person to enter the hospital and continue this episode. We had to encounter him as soon as possible and render the situation safe.”

UPDATE: 10:30 a.m. local time: Harris County Sheriff’s Office Spokesman Thomas Gilliland told Breitbart Texas two deputies were working security while an off-duty job. They were contacted by hospital emergency room employees after a gunman had started yelling and opened fire in the emergency room. The two deputies engaged the suspect outside the ER and ordered him to drop his handgun. The suspect refused and the deputies fired multiple shots at the suspect. The suspect is currently being treated in the hospital.

A deputy with the Harris County Sheriff’s Office told Breitbart Texas on Tuesday morning that deputies responded to an active shooter situation at Cypress North Houston Hospital located on Highway 290. The deputy said the suspect was shot by one of the deputies on the scene and is in surgery.

The driveway area outside the emergency room is littered with evidence markers indicating several rounds may have been fired. It is not known at this time if the shooter fired at the deputy. No deputies were injured in the incident.

Harris County Sheriff’s Office Spokesman Thomas Gilliland told the Houston Chronicle the suspect pulled a gun and fired one shot into the air. Deputies ordered the man to drop the weapon. When he refused, at least one deputy opened fire on the suspect. He is reportedly in critical condition.

It is not known if this incident is related to the home invasion shooting that took place in north Houston on Tuesday night.