Court documents filed in the ongoing case against Mexican drug kingpin Joaquin “El Chapo” Guzman revealed that the cornerstone of the drug lord’s success was corruption within the government of Mexico. El Chapo was able to have Mexican law enforcement escort his drug shipments throughout Mexico.

Guzman is the current leader of the Sinaloa Cartel, a criminal organization identified by the U.S. Department of Justice as the largest and most prolific drug trafficking organization in the world. As Breitbart Texas has reported, on Thursday afternoon, Guzman was extradited from Mexico to the U.S. where he is currently facing six separate indictments accusing him of multiple charges including drug trafficking, murder, money laundering and others.

As part of the hearing, the U.S. Department of Justice filed various documents asking the court to order El Chapo be held without bond until trial. One of those documents details the rise of the Sinaloa Cartel under El Chapo from a simple smuggling group into the leading cartel in the world. 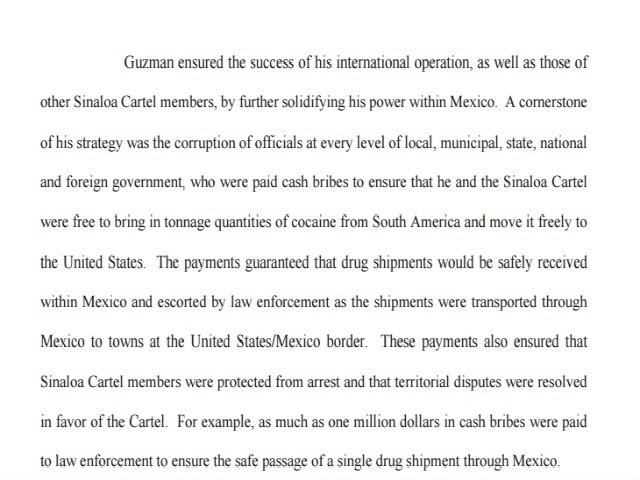 The documents explain that El Chapo solidified his power in Mexico on a strategy based on taking advantage on the widespread corruption in Mexico.

“A cornerstone of his strategy was the corruption of officials at every level of local, municipal, state, federal and foreign government who were paid cash bribes to ensure that he and the Sinaloa Cartel were free to bring in tonnage quantities of cocaine from South America and move it freely to the United States,” the document revealed.

The payments provided armed security by Mexican law enforcement officials from various stockpiles to border cities where the drugs were then smuggled. One case detailed in the document pointed to one particular shipment of drugs receiving law enforcement protection at the cost of $1 million. The deep corruption in Mexico also allowed the Sinaloa cartel to have territorial disputes with other cartels be decided in favor of El Chapo.

The documents also detail how Guzman used paramilitary forces made up of heavily armed cartel assassins to take over the territories of others setting off fierce turf wars. The raging war in Ciudad Juarez and the bloody conflict in Tamaulipas between the Sinaloa and Los Zetas cartels are blamed on El Chapo.

“These violent conflicts often spilled over into the United States, endangering members of law enforcement working at the border and families living in nearby towns,” the documents revealed.