Today, we completed a 15 mile section of border wall system in El Centro Sector that will provide much needed infrastructure to help USBP agents secure the border.

It is not clear from the announcement if this is a new border wall system, or a replacement for outdated technology. Regardless, the new bollard-style wall provides increased security, technology surveillance, lighting, and all-weather roads to improve the response time of Border Patrol agents to crossings in the area.

Last summer, Breitbart Texas reported that the completion of new border wall construction in the El Sentro Sector made the area safer for agents to patrol and reduced crime in the area.

“We’ve had people throw Molotov cocktails over the old landing mat fence and it was dangerous because we couldn’t see through it like we can with [President Donald Trump’s] new border barrier. Here in El Centro, we have the highest stretch of border wall on the entire Southwest border. Trump’s new wall section is 30-feet high,” Border Patrol Agent Mike Matzke said in his capacity as president of the National Border Patrol Council Local 2554.

“New sections of Trump’s wall have been built and anyone claiming that a 30-foot barrier that replaced a 10-foot high sheet metal fence isn’t new barrier doesn’t know what they are talking about,” the veteran Border Patrol agent explained. “The old legacy landing mat fence in our sector wasn’t effective and really bad people were jumping all day and night.” 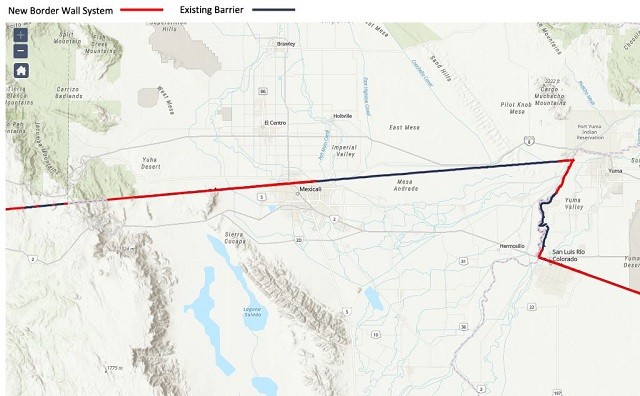 Map of new and existing border barriers in Southern California and southwestern Arizona courtesy of U.S. Customs and Border Protection.

“Since the border wall system was completed in this area, local business and commerce is thriving and areas once considered dangerous are now secure,” Devack stated. “In addition, overall crime in this area has been significantly reduced thus making our community a safer place to live and work.”

Since the completion of the border wall system in Calexico, CA, overall crime in the area has been reduced making the community a safer place to live and to work. Areas once considered dangerous are now secure. To learn more: pic.twitter.com/btC1Box7AB

CBP officials report the completion of 175 miles of new border wall systems along the U.S. border with Mexico. In the process, contractors utilized 245,000 tons of steel and 360,000 cubic yards of concrete.

Border Patrol agents previously told Breitbart Texas they like the new bollard walls because they are difficult to climb and provide agents with visibility to what is happening on the Mexican side of the wall.