Florida Governor Ron DeSantis expressed surprise at reports from the border in Del Rio, Texas, saying that 70 percent of apprehended migrants are headed to his state. The Florida governor’s comments came following a border briefing with Texas Governor Greg Abbott on Saturday.

Governor DeSantis told reporters that 70 percent of the migrants apprehended in the Del Rio Border Patrol Sector are bound for Florida. He also said that 95 percent of the methamphetamine coming into his state comes from the Texas border. 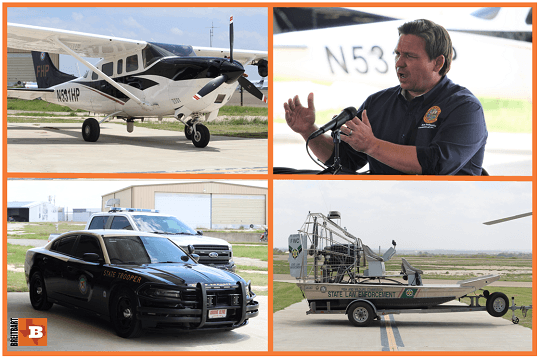 “I think those numbers are eye-popping,” the Florida governor said. “The number of these people coming across illegally, who are telling folks that their destination is Florida, obviously I knew we were going to get some, but I didn’t think it’d be a majority.”

DeSantis said some of this information came from the law enforcement personnel his state sent to Texas to help with the border crisis that has exploded since President Joe Biden took office in January.

When confronted by our deployed Florida law enforcement at the southern border, roughly 70% of illegal border crossers said that Florida was their ultimate desired destination. pic.twitter.com/7hZX5j7Kwx

“Our Florida personnel have assisted with the apprehension of more than 2800, illegal aliens and they’ve assisted with more than 100 arrests for felonies, of those aliens including human trafficking, drug smuggling, and stolen vehicles and so they have had a big impact,” the Florida governor reported. “I certainly wouldn’t have been able to ring up those numbers a year ago there’s just no way.”

Governor Abbott responded to the Florida governor, saying, “We thank Governor DeSantis and as well as the other officials from Florida, who are here with us today. We appreciate your support, whether it be in personnel resources, whether it be aircraft, whether it be boats, but we need all the manpower, we can get to repel the incredible number, the record-breaking number of people who are coming across the border.”

“I do want to add that in addition to Florida, Texas is so proud to have support from other states including Nebraska, Iowa, South Dakota, Arkansas, and Ohio,” Abbott stated. “This is a national-based issue and Governor DeSantis made the points of why this is such a national issue. And that what happens at the border may be happening here today, but it will be happening in these other states, tomorrow, or next week, or next month.”