Banners left in several cities throughout the border state of Tamaulipas announced a truce between warring factions of the Gulf Cartel. The criminal organization claims it is restoring peace to the region.

On Monday morning, unidentified men left banners in Matamoros, Reynosa, Rio Bravo, San Fernando, and Tampico. The messages claim the three factions of the Gulf Cartel forged a truce as of July 19. Two of those have been at war for several years and are responsible for most of the violence in northern Tamaulipas. In June, gunmen from the faction in Matamoros rushed into Reynosa and killed 15 innocent civilians during clashes with state police — federal and military forces did not intervene. 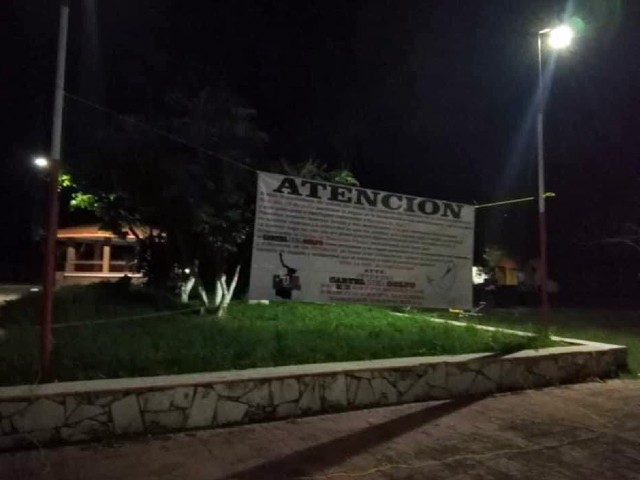 Federal and state authorities throughout Tamaulipas retrieved the new banners. Breitbart Texas consulted with Tamaulipas authorities who revealed they are investigating the issue to determine if a truce was indeed struck and what it means for the region.

The banners claim the organization is looking for peace and honoring fallen members while promising to focus only on their business moving forward. The Gulf Cartel is profiting immensely from migrant smuggling into Texas in 2021. They charge between $500 to $800 from each migrant for crossing the Rio Grande–not including other fees paid along their journeys. The most recent Border Patrol statistics show authorities detaining between 2,000 to 3,000 migrants in the Rio Grande Valley Sector on any given day. 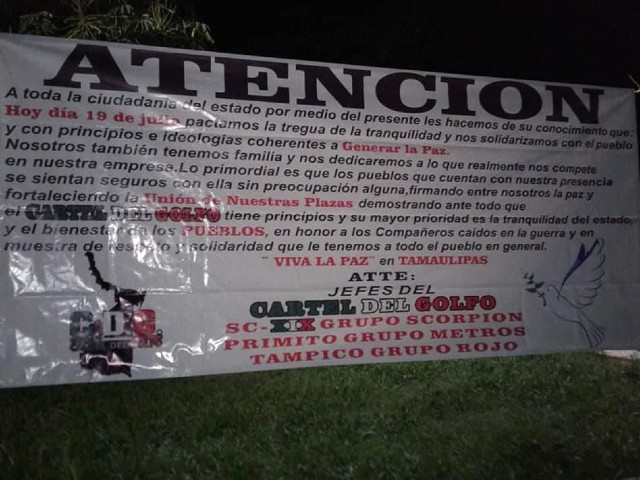 The Metros faction and the Escorpion sect have been at war for at least four years, leading to hundreds of murders, kidnappings, and forced disappearances. During that time, the Gulf Cartel resorted to using mass graves and clandestine incineration sites to dispose of fallen members and their victims. Most of those cases remain unsolved. Only a fraction of the actual crimes are reported to authorities.

“J.A. Espinoza” and “J.C. Sanchez” contributed to this report.