Hunter Biden will meet with prospective art buyers at two art shows in Los Angeles and New York City later this year, giving the novice painter an opportunity to meet with potential “anonymous” buyers of artwork priced up to $500,000.

“Oh yes. With pleasure,” Davis said. “He’s looking forward to it. It is like someone debuting in the world. And of course he will be there.”

“Everyone will be vetted…so, whomever is appropriate will be attending,” David added about the concern of who might buy the novice’s “artwork” during events in which “Biden will not discuss potential purchases, prices, or anything related to the selling of artwork, according to a “source familiar with the matter.”

“He really wants to help Hunter and for people to recognize his talent,” Davis said of the Gallery owner, Georges Berges. “So you know, I think it’s all on the up and up.”

Breitbart News reported July 8 that Hunter Biden was working with the Soho art dealer Georges Bergès, who has links to China himself:

Bergès is holding an art exhibition in the fall, where Hunter’s art is expected to sell anywhere from $75,000-$500,000. The entire venture has prompted ethics concerns, particularly given Hunter’s past work as his father served as vice president — striking deals with Chinese officials and raking in tens of thousands of dollars per month serving on the board of Burisma, a Ukrainian oligarch-owned oil and gas company, despite having no experience in the energy sector. His father would later brag about threatening to withhold aid from Ukraine unless officials fired the prosecutor conducting a corruption investigation into Burisma.

But instead of making the transactions more transparent and open, the White House is hoping to strike a deal to make buyers of Hunter Biden’s artwork, which is expected to sell for up to half a million dollars, anonymous.

CBS News also reported that Hunter Biden will “presumably socialize with potential buyers,” which is “seemingly at odds with an agreement struck with the gallery owner that aims to keep buyers’ identities secret from Biden, President Biden, the White House, and the public.”

White House press secretary Jen Psaki explained July 10 that Hunter Biden “has the right to pursue an artistic career” by selling “artwork” to an anonymous buyer for as much as $500,000, despite concerns that Hunter Biden is still invested in “CCP [Chinese Communist Party]-linked firms.”

But according to the establishment media on July 8, Bergès would set the prices for the artwork and withhold “all records, including potential bidders and final buyers.”

Bergès “has also agreed to reject any offer that he deems suspicious or that comes in over the asking price, according to people familiar with the agreement,” the Washington Post illuminated.

Breitbart News senior contributor and Profiles in Corruption author Peter Schweizer, however, dubbed the proposal as an utterly “absurd” solution.

“The only way to address these issues is with greater transparency–not less,” he told Breitbart News. “Their proposed solution is greater secrecy, not transparency. And they are essentially saying ‘Trust Us.’ Joe and Hunter Biden’s track record on such matters gives us no reason to trust them.”

Sen. Tom Cotton (R-AR) tweeted the scheme as the potential for a conflict of interest.

“Some very tough ethical questions about whether the president’s son, who is still investing in CCP-linked firms, should take $500,000 in payment (bribes) for his ‘artwork,’” Cotton tweeted. 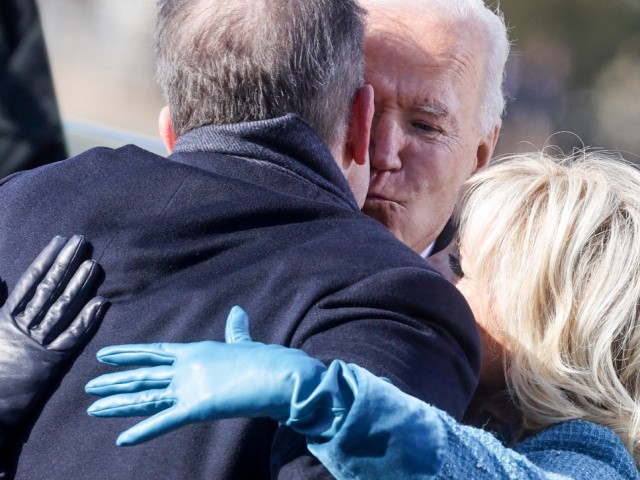 After all, money laundering was identified as an issue in the art world, according to the Senate’s Permanent Subcommittee on Investigations last year.

“Secrecy, anonymity, and a lack of regulation create an environment ripe for laundering money and evading sanctions,” the committee explained. “Given the intrinsic secrecy of the art industry, it is clear that change is needed in this multi-billion dollar industry.”

Though President Joe Biden has remained removed during his son’s new scandalous venture, Hunter Biden told Artnet, “My dad loves everything that I do, and so I’ll leave it at that.”