Arson has not been ruled out as a possible cause of the Colorado wildfires that have ravaged Boulder County, destroying an estimated 1,000 homes.

“Police told Fox 31 Denver that they are investigating all possible causes of last week’s fire, saying that if arson or human negligence were to blame that the people responsible would be held accountable,” according to Fox News.

On Saturday,  the Boulder County Sheriff’s Office executed a search warrant at a property of interest to investigate the cause of the Marshall Fire. No indication has been given as to what they were searching for or if they discovered anything of importance.

DEVASTATION: Colorado's wildfires are shaping up to be the most destructive fires in state history in terms of property damage. https://t.co/oTTxKv8JPO

“We are actively investigating a number of tips that came in yesterday and last night from the community,” Sheriff Joe Pelle said. “One of those tips has resulted in us executing a search warrant on a property.”

“We’re looking into the cause and origin of the fire. If it turns out to be arson or reckless behavior with fire, we’ll take appropriate actions,” he added. “It was a red flag day the day of the fire, so there shouldn’t have been any burning.”

On Sunday, Colorado Public Radio’s Allison Sherry tweeted Colorado Gov. Jared Polis (D) will be working with the FBI to investigate what has become the most destructive fire in Colorado history.

Gov. Jared Polis confirms the FBI is helping investigate the cause of the fire.

Though the fire has claimed nearly a thousand homes, no fatalities have been reported as of yet, though three people have since been reported missing. According to the Washington Post, the search for the three missing people has proven difficult due to the snowstorm.

“The snow is an awesome thing for fire behavior, and it’s a hard thing for crime scenes and recovery efforts and damage assessments and all those things,” Sheriff Pelle said. “So it’s a mixed blessing.”

Residents described the situation as something unprecedented, especially for the month of December; fire season in Colorado typically spans from May to September. 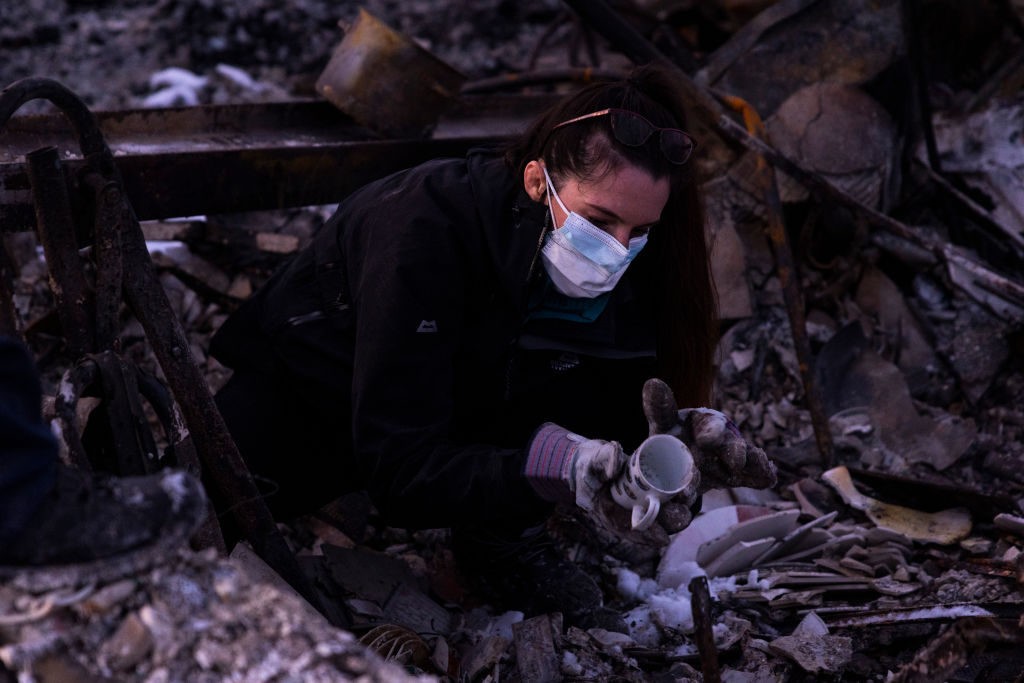 Allison Price digs through the debris at the parents’ house of her boyfriend in a neighborhood decimated by the Marshall Fire on January 2, 2022 in Louisville, Colorado. Officials reported 991 homes were destroyed, making it the most destructive wildfire in Colorado history. (Michael Ciaglo/Getty)

“By the time I got up here, the houses were completely engulfed,” said another resident. “I mean, it happened so quickly. I’ve never seen anything like that. … Just house after house, fences, just stuff flying through the air, just caught on fire.”

Photos of the #MarshallFire by @DenverGazette's Tim Hurst. The fire burning in Boulder County has forced evacuations of approximately 35,000 people and destroyed an estimated 580 homes — making it the most destructive fire in Colorado history in terms of structures lost. pic.twitter.com/I1c2zPBNuH

Photos of the #MarshallFire by @DenverGazette's Tim Hurst. The fire burning in Boulder County has forced evacuations of approximately 35,000 people and destroyed an estimated 580 homes — making it the most destructive fire in Colorado history in terms of structures lost. pic.twitter.com/I1c2zPBNuH