Underneath the subheadline, “Trump and Biden navigate new terrain as voter alliances shift along occupational lines,” the newspaper reported:

In 2020, Trump is building on his blue-collar support by showcasing his support for the fracking industry, which has delivered wealth to blue-collar workers in the energy, construction, and transport industries. The article quoted a local truck driver:

Truck driver Tori Wilson of Washington County, where local control flipped to the GOP last year, voted for a third-party candidate in 2016 but is leaning toward Mr. Trump today. “The positive is going to come from the Republican side, as far as blue-collar work,’’ said Mr. Wilson, 46.

Joe Biden is trying to minimize his blue-collar losses while he expands his white-collar advantage:

Mr. Biden’s campaign is trying to build on Democratic margins in recent elections in and around Philadelphia and in the state’s smaller cities, while pointing to trade wars under the Trump administration and the job losses during the pandemic to make the case that Mr. Trump’s promises to blue-collar workers have gone unfulfilled. The campaign has expanded Democrats’ outreach to blue-collar workers and, despite his campaign being largely grounded because of the pandemic, Mr. Biden has traveled from Delaware to neighboring Pennsylvania six times since June.

Trump, however, is also making a play for white-collar voters.

The president is promising to protect suburbs from the Democrats’ plan to subdivide suburban tracts and is touting his opposition to white-collar outsourcing programs that threaten so many professionals in Pennsylvania and other states.

For example, Trump’s used his nomination acceptance speech to tout his support for Americans who are displaced by H-1B outsourcing.

The issue may resonate among Pennsylvania’s white-collar voters. In July, the Philadelphia Inquirer reported the Vanguard Group insurance firm would shift more than 1,200 jobs to an Indian-run subcontractor. The Indian firm imports H-1B workers to fill U.S. jobs and then train them to take the work back to India’s low-wage economy.

In 2017, Pennsylvania companies asked the federal government for foreign workers to fill at least 18,000 jobs with new three-year H-1B workers, according to SAITJ.org, a website that displays government data about visa-workers.

In 2020, Pennsylvania employers asked for 15,533 visas to bring in new workers or to extend the stay of existing workers, according to similar data provided by MyVisaJobs.com. Those requests included almost 2,000 foreign workers for jobs in universities and research centers.

Watch Pres. Trump talk with TVA workers about outsourcing, opportunities, and security.
There is a passing mention or two about the TVA chief's $8 million salary.
Labor Sec. Scalia promises a huge reform of #H1B staffing rules.https://t.co/ZcaaxEGrZT

In contrast, Biden is signaling a welcome for more illegal migrants, more legal migration, plus more visa workers for white-collar jobs in the Fortune 500 and the nation’s universities.

This is yet another ploy by the Trump Administration to push its xenophobic agenda under the guise of helping Americans. Suspending forms of legal immigration, including the types of work visas entrepreneurs and highly skilled workers rely upon, will harm Pennsylvania’s businesses and economy and slow our recovery from the downturn caused by COVID-19. These workers, who are arriving in Pennsylvania legally, play an essential role in making our communities strong and vibrant. I will continue to fight to keep Pennsylvania as a place that is welcoming to all.

The visa workers are quietly hired by employers to fill many good jobs that can be filled by the United States’ large population of engineers, scientists, and healthcare professionals. In many cases, the foreign workers are hired because they cannot switch jobs, they have few workplace rights, and because they will accept lower wages in exchange for their employers nominating them for green cards.

The Philadelphia Inquirer touted the use of foreign H-1B and J-1 workers in a July article:

Cesar de la Fuente is at risk of losing more than half of his research lab to deportation.

Tighter visa restrictions have the University of Pennsylvania psychiatry professor fearing that the eight international researchers in his 10-member lab might be forced to leave if they can’t find an exception to the new regulations. “We only have two Americans in the lab right now. So everyone else, I’m worried for them.”

His own path shows the power of that mechanism. De la Fuente emigrated from Spain to attend the University of British Columbia in Vancouver with a Canadian visa before using a J-1 visa to become a postdoctoral researcher at the Massachusetts Institute of Technology.

A 2017 article in the New York Times noted many Americans graduate from college with skilled degrees, but cannot get jobs in their careers:

Unemployment rates for STEM majors may be low, but not all of those with undergraduate degrees end up in their field of study — only 13 percent in life sciences and 17 percent in physical sciences, according to a 2013 National Science Foundation survey. Computer science is the only STEM field where more than half of graduates are employed in their field. 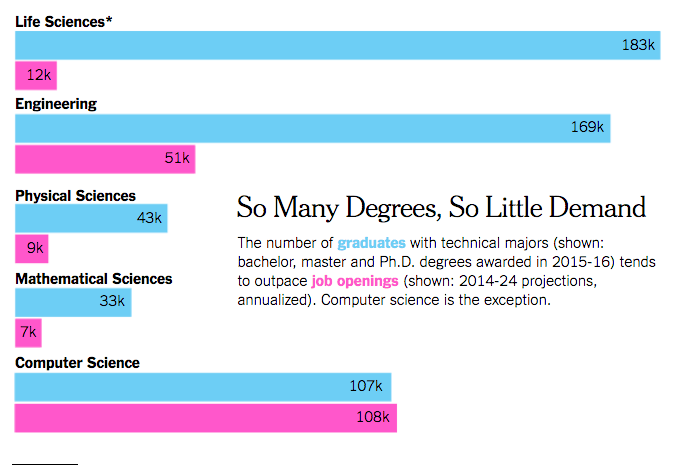 A big labor-rights win for Labor Day: Trump can curb legal immigration if he believes it helps US employees get and hold jobs, says a federal judge.
That's a big loss for the Fortune 500 that says Trump's 212(f) power can't apply to economic concerns@H1Bhttps://t.co/7poXTnObAQ