Schumer made his claim as many employers say they must raise wages for Americans in a national labor shortage.

Since early 2020, many Americans quit their jobs in low-wage sectors, such as bars, restaurants, retail stores and for home-healthcare contractors. That resulting labor shortage has boosted wages for millions of blue-collar Americans.

Schumer spoke the morning after the Senate’s debate referee, the Parliamentarian, blocked the Democrats from putting an amnesty for illegal migrants in a special funding bill. The bill can pass with only 51 votes instead of the usual 60 votes in the Senate.

The last year and a half … have shown how vital our [illegal] immigrants have been to keeping our economy going during the time of crisis … We’re short of workers from one end of America to the other — one of the reasons? The Trump administration dramatically cut back on immigrants in this country. We need them. We need them in our labor force. We need them to continue American vitality. We need them because they’re part of the American dream.

Schumer sought to shame Americans into supporting the mass migration policies which allow New York’s employers and landlords to become reliant on plentiful and cheap legal immigrants and illegal migrants:

It’s estimated in my city [New York] by some that one-third of the healthcare workers at the height of COVID who risked their lives for us were immigrants. Having a strong law that helps our immigrants is vital. The American people understand that fixing our broken immigration system is a moral imperative [emphasis added] and an economic imperative.

Immigration reform has been one of the most important causes of my time in the Senate, and I will not stop fighting to achieve it.

Schumer blamed President Donald Trump’s 2020 curbs on migration for the labor shortage. But that admission indirectly credits Trump’s 2020 policy with helping to raise 2021 wages for millions of Americans.

"The last year and a half have shown how vital immigrants have been to keeping our economy going in a time of crisis. So many risked their lives during the pandemic but were excluded from the benefits" – @SenSchumer #WeAreHome https://t.co/LQ0CnWOE14

Biden, age 78, explained his support for the long-standing and very popular goal of a tight labor market in a May 28 speech:

Well, wait until you see what happens when employers have to compete for workers.  Companies like McDonald’s, Home Depot, Bank of America, and others — what do they have to do?  They have to raise wages to attract workers.  That’s the way it’s supposed to be.

“The labor scarcity we’re experiencing is real … [but] this is an opportunity, not a crisis,” David Autor, a professor at the Massachusetts Institute of Technology, said in a September 4 op-ed for Schumer’s home-town newspaper, the New York Times. He continued:

Couldn’t raising wages spur employers to automate many low-paid service jobs? Yes — but that’s not bad. There’s no future in working the fry station at White Castle. We should welcome the robot that’s now doing that job at some locations. Automating bad jobs has positive consequences for productivity. When employers pay more for human labor, they have an incentive to use it more productively … And one way to use people more productively is to train them. This may be one reason that employers provide more training opportunities in a tightening labor market — something happening now.

However, lobbyists have persuaded Biden to back the amnesties that would deliver roughly six million workers — at least — into many of the jobs needed by Americans.

To a large extent, Biden has been pushed to back amnesties — and to forget about tight labor markets — because of face-to-face pressure by lobbyists from Mark Zuckerberg’s FWD.us advocacy group of West Coast investors.

On September 17, Biden’s economic advisors downplayed the wage damage to Americans as they issued a pro-amnesty memo. Notably, the memo did not endorse lobbyists’ claims that an amnesty would raise wages for Americans, and promised that wage losses would disappear “in the longer run.” 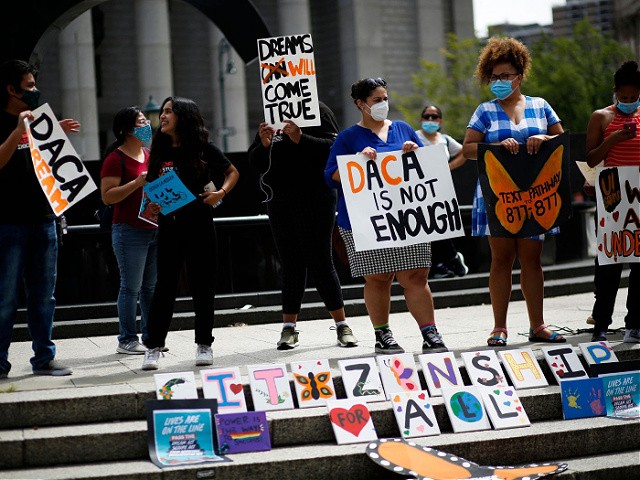 The economic damage caused by migration to Americans was made clear September 1, when several Americans and illegal immigrant were drowned in the their cheap basement apartments in New York. The apartments were all they could afford in a city where migration has swelled real-estate values.

The New York Times posted an article on September 2, which was discreetly  silent about the federal government’s role in the drowning of migrants — and of poor Americans — in New York’s cheap basements:

In one of the most expensive housing markets in the world, they have offered low-income New Yorkers, including many working-class families who work in restaurants and hotels, affordable places to live. The basement apartments also provide some extra income for small landlords, many of whom are also immigrants.

Deborah Torres, who lives on the first floor of a building in Woodside, Queens, said she heard desperate pleas from the basement apartment of three members of a family, including a toddler, as floodwaters rushed in. A powerful cascade of water prevented anyone from getting into the apartment to help — or anyone from getting out. The family did not survive.

However, donor-funded GOP leaders have downplayed the pocketbook impact of migration on Americans’ communities. Instead, they try to steer voters’ concerns towards subsidiary non-economic issues, such as migrant crime, the border wall, border chaos, and drug smuggling.