States that have Republican governors and legislatures have overwhelmingly succeeded in leading their state’s economic recovery before the majority of those governed by Democrats, according to an analysis of the January state-by-state unemployment data from the Department of Labor.

“More jobs are being recovered, and unemployment is lower in red states,” the RNC research team wrote in their analysis of data from March of the January data.

The six states with the highest job growth in the country are run by Republicans, while the top ten are led by Republican legislatures, as states across the country continue to end the coronavirus restrictions as Americans get back to work.

Looking further into the data, the RNC analysis confirmed that, as of January, 15 of the top 20 states led by Republican governors are doing a better job versus those led by Democrats governors. Plus, 17 of the top 20 recovering states have Republican-controlled legislatures.

The data shows that Republican leadership is unleashing prosperity across the country https://t.co/qPyw1b3uZ0

Additionally, nine Republican-led states — Utah, Idaho, Montana, Arkansas, Texas, Arizona, Florida, Georgia, and Tennessee — have produced more jobs than the state had before the coronavirus pandemic started and any restrictions were put in place.

“The Biden gas hike, the tax and spend agenda in blue states, and Democrat lockdowns are leaving Americans behind,” said RNC Chairman Ronna McDaniel on the analysis of the Labor Department’s January data. 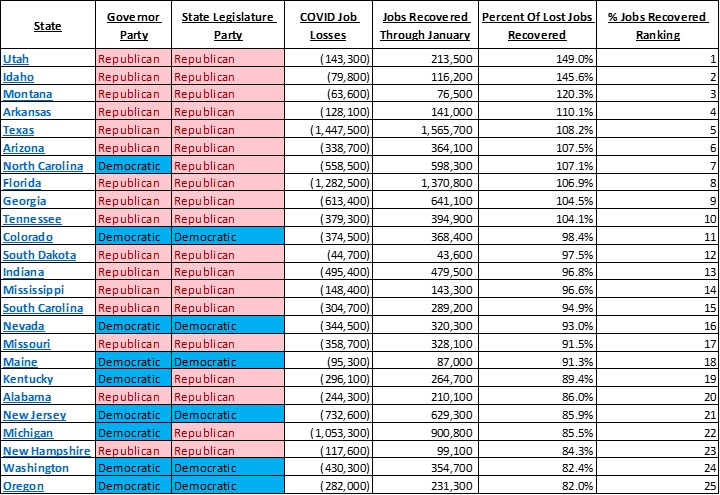 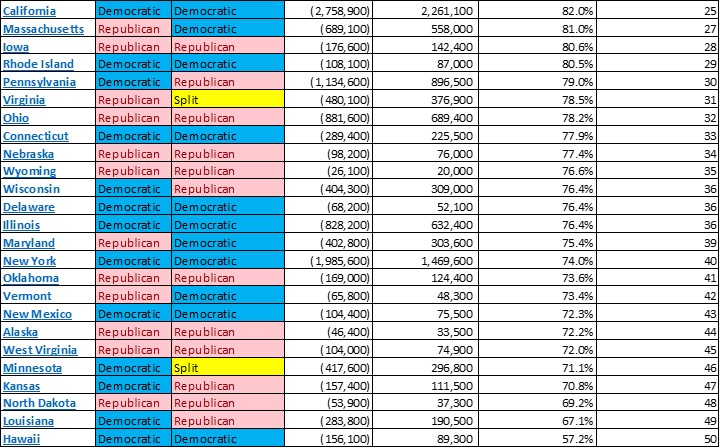 Moreover, according to the RNC analysis, the three states with the lowest unemployment rates are fully Republican-led. And the top seven are led by Republican legislatures as states across the country continue to end the coronavirus restrictions as Americans get back to work.

The three Republican-governed states with the lowest unemployment rates from January are Nebraska (2.2 percent), Utah (2.2 percent), and Indiana (2.4 percent).

Analysis: Republican-led States Ahead of Democrat-led States in Economic Recovery in December – Breitbarthttps://t.co/bjNmYA8VL3 via @jacobmbliss 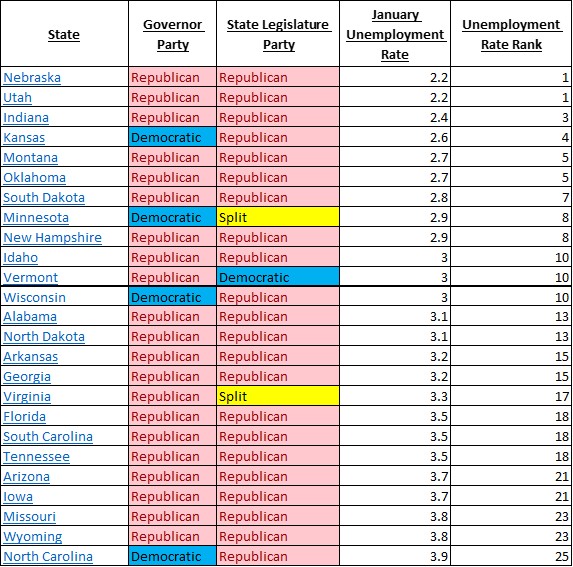 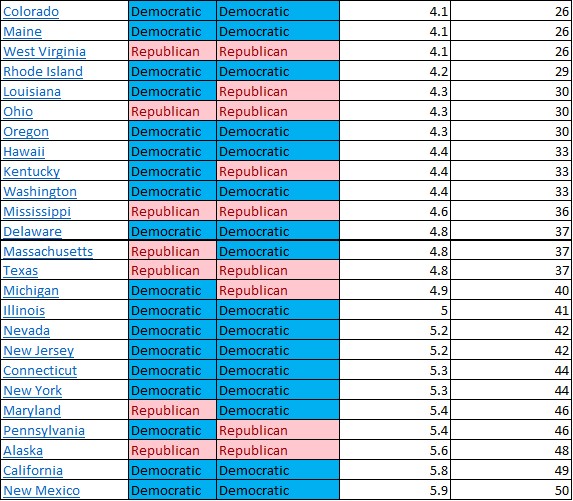 “The data is clear: Republican leadership works, while Biden and the Democrats leave families behind. Republican governors and legislatures are delivering for hardworking Americans and unleashing opportunity for all,” McDaniel added.

Although this analysis represents January’s state-by-state unemployment data from the Department of Labor, the country is still going through constant problems since Joe Biden has become president. RNC noted that under Biden, “33 states have hit a new record high gas prices, and in 38 states, Americans are paying average prices above $4 per gallon.”

Nonetheless, under Biden, the country experienced higher gas prices, saw the highest inflation rate in nearly four decades, bad jobs reports, and an ongoing supply chain crisis. A budget model from the University of Pennsylvania’s Wharton School showed that inflation cost families an additional $3,500 in 2020, meaning they would have to spend that much more just to keep up with their normal yearly expenses, based on 2019 and 2020 spending models.

"States with Republican governors and legislatures are leading Americans back to work quicker than those led by Democrats."

18/20 of the fastest recovering states have Republican majority legislatures.

Hey Joe, this is how you actually #BuildBackBetter.https://t.co/Qigl0BBFsA

Since the Democrats have also taken power in Washington, between Congress and Biden, they have taken aim at American energy. As most Democrats have stood by, Biden has canceled the Keystone XL Pipeline, suspended oil and gas leasing, halted federal support for oil and gas projects overseas, and suspended oil drilling leases in the Arctic National Wildlife Refuge (ANWR).

In fact, Biden the Democrats spent last year trying to ram partisan bills from the president’s legislative agenda through Congress while the country was recovering from the pandemic. Democrats passed the disastrous $1.2 trillion, 2,702-page so-called bipartisan infrastructure bill — which Biden signed into law — and passed the $1.75 trillion Build Back Better Act (BBB) in the House.

While all but one Democrat voted to pass the BBB, Democrats knew ahead go time how harmful the bill would be for American energy. In fact, six vulnerable members acknowledged how hurtful BBB was and even wrote a letter to Democrat leadership saying it targeted the oil, natural gas, and refining industries in the United States.

They noted that the BBB, if passed, had the “potential to cost thousands of jobs, stifle economic recovery, increase energy costs for all Americans, strengthen our adversaries, and ultimately impede the transition to a lower-carbon future.”