States that have Republican governors and legislatures have overwhelmingly succeeded at leading their state’s economic recovery sooner than the majority of those governed by Democrats, according to an analysis of the state-by-state unemployment data from the Department of Labor.

“More jobs are being recovered and unemployment is lower in red states,” the RNC research team wrote in their analysis of data from December.

The nine states with the highest job growth in the country are run by Republican governors.

Looking further into the data, the RNC analysis confirmed that 16 of the top 20 states are led by Republican governors. At the same time, 18 of the top 20 recovering states have Republican-controlled legislatures. Similar results were revealed in the November data.

"States with Republican governors and legislatures are leading Americans back to work quicker than those led by Democrats."

18/20 of the fastest recovering states have Republican majority legislatures.

Hey Joe, this is how you actually #BuildBackBetter.https://t.co/Qigl0BBFsA

Additionally, four Republican-led states — Utah, Idaho, Texas, and Arizona — have produced more jobs than they had before the coronavirus pandemic started and any restrictions were put in place. Since the coronavirus pandemic, Utah has had 142.9 percent of its jobs recovered, Idaho 121.5 percent, Texas 106.2 percent, and Arizona 104.3 percent. November’s numbers showed similar results, with the same four states at the top. 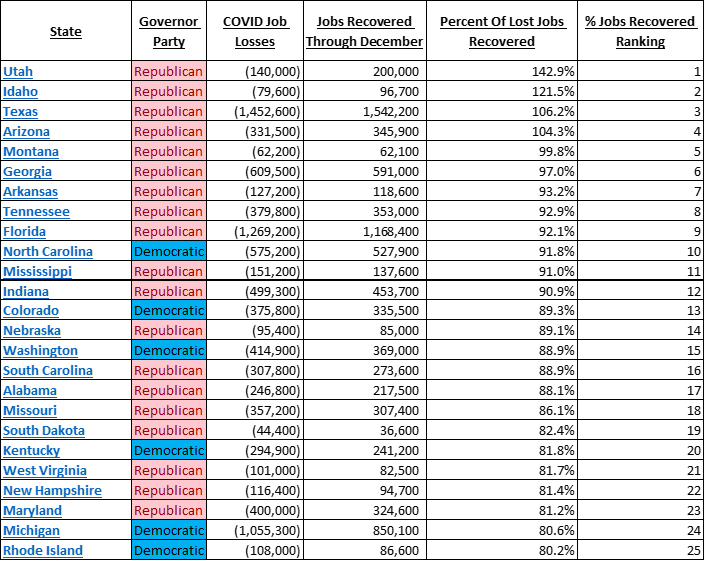 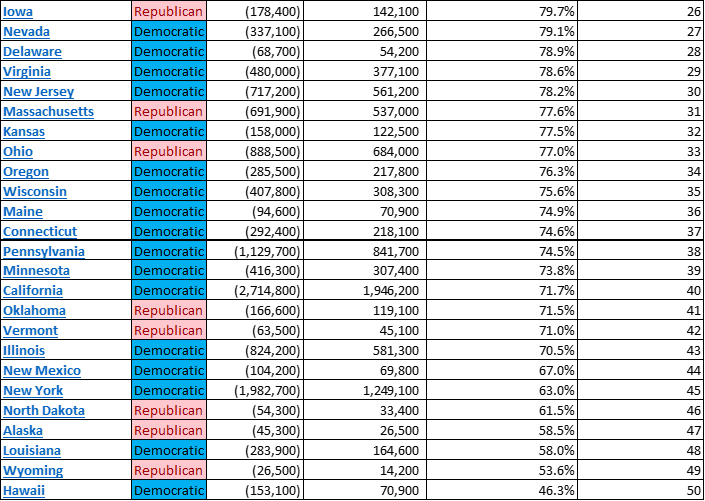 Moreover, according to the RNC analysis, the ten states with the lowest unemployment rates are Republican-led. 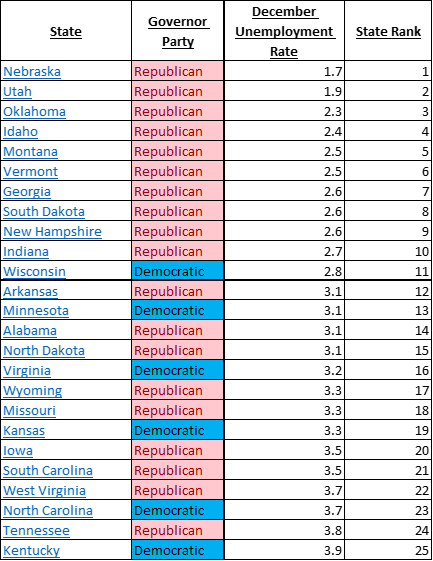 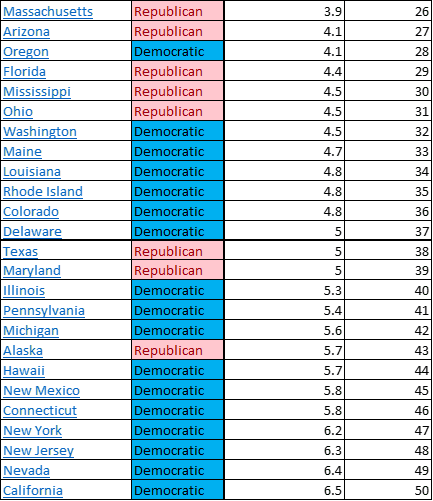 The December analysis came as President Joseph Robinette Biden, Jr. and the Democrats spent last year trying to ram partisan bills from the president’s legislative agenda through Congress while the country was recovering from the pandemic. Last year, the Democrats passed the disastrous $1.2 trillion, 2,702-page so-called bipartisan infrastructure bill — which Biden signed into law — and passed the $1.75 trillion Build Back Better Act (BBB) in the House.

However, while the BBB was considered to be the “marquee legislation” of Biden’s legislative agenda and would ultimately increase taxes on the middle class, expand and prolong the effects of inflation, and add hundreds of billions of dollars to the U.S. deficit, it was effectively killed by Sen. Joe Manchin (D-WV). The senator said at the end of 2021, “I cannot vote to continue with this piece of legislation.”

Republican-led states have proven to bring jobs back faster than Democrat-led states as Americans get back to work, according to new state-by-state unemployment data from the Department of Labor. https://t.co/7v95vJ0HxF

The analysis noted that Americans are moving to Republican-led states like Texas and Florida while populations in California, Illinois, and New York are declining. It added that eight of the top ten real estate markets are in Republican-led states. The National Review reported that U-Haul ran out of trucks for people trying to move out of California due to high demand. The report indicated that  Florida and Texas were “big inbound winners” for movers.

Biden, who has already started off the year with consistently poor poll numbers, had just 33 percent approval on his job performance from a Quinnipiac University poll days before he completed one full year in office. Additionally, CIVIQS’s rolling job approval average showed that Biden was under water in 46 states, including the two typically solid blue states of California and Rhode Island — and tied in Maryland at the beginning of January.

Nonetheless, under Biden, the country saw the highest inflation rate in nearly four decades, bad jobs reports, and an ongoing supply chain crisis. A recent budget model from the University of Pennsylvania’s Wharton School showed that inflation cost families an additional $3,500 last year, meaning they would have to spend that much more just to keep up with their normal yearly expenses, based on 2019 and 2020 spending.