Empty seats, zero atmosphere, diminished team numbers, local protests and a world distracted by coronavirus all combined to deliver just 16.7 million viewers for NBC’s four-hour long broadcast of the Tokyo Olympic Games opening ceremony on Friday. It was the smallest U.S. television audience for the event in the past 33 years.

Keen Olympic watchers would have to go back to the opening ceremony for the 1988 Seoul Games, which attracted 22.7 million TV viewers, to see numbers like it.

It was also lower than the 1992 Barcelona Games, when 21.6 million people tuned in, according to Nielsen data supplied to Reuters, although some critics could see what lay ahead before one athlete had entered the arena for the march past.

Nolte: With crybaby Olympians threatening to turn the Olympics into the Woketard Olympics and men competing as women, all signs currently point to a ratings disaster for far-left NBC. https://t.co/Nu9868mDDK

As Breitbart News reported, corporate media has been quick to trash the opener as a somber production performed to a “sea of empty seats,” a striking departure from the vibrancy and life that featured Olympics’ past.

According to the New York Times, the performances themselves aimed to “divert the message of the Games away from the pandemic and scandals and toward the more anodyne themes of peace and global harmony.”

“But that messaging may have little resonance with the Japanese public, as coronavirus infections in Tokyo have risen to a six-month high and the domestic vaccine rollout has proceeded slowly,” the Times reported.

During quieter moments in the show however, “protesters outside the stadium could be heard yelling ‘Stop the Olympics” through bullhorns,’” the paper reported.

Organizers announced in all some 10,400 people were in the 68,000-seat Olympic Stadium for the scaled-down Opening Ceremony, including 6,000 members of team delegations, around 900 VIPs and 3,500 members of the media.

With Tokyo 13 hours ahead of the U.S. East Coast, NBC for the first time broadcast the ceremony live in the morning, at 6:55 a.m. ET Friday. NBC’s taped, primetime broadcast began at 7:30 p.m. ET.

In its primetime coverage, NBC acknowledged the pandemic and its toll. 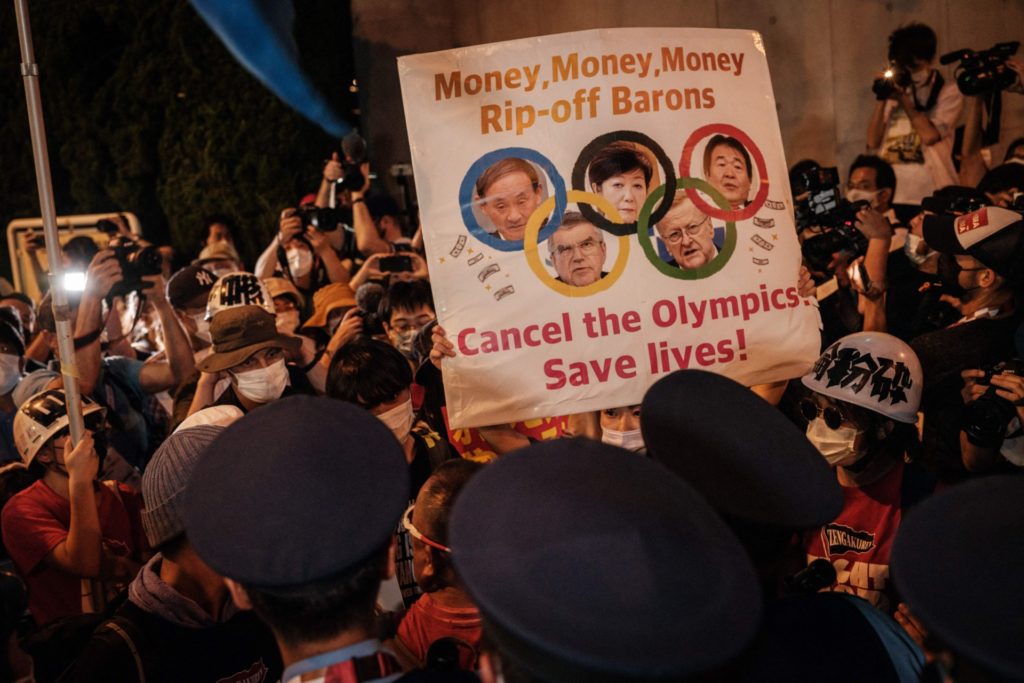 “Absence makes the heart grow fonder,” trilled host Savannah Guthrie, co-anchor of NBC News’ “Today” morning show. “There’s nothing like an opening ceremony to really get you excited for the Olympic Games.”

The lack of eyeballs enjoying the show would appear to suggest otherwise, with the prospect of “woke” athletes using their appearance on the world stage to embrace political protest still ahead.

.@HerschelWalker called out the woke activist “athletes” grandstanding at the #TokyoOlympics! https://t.co/fs4djtnTXR

The Games have been deeply unpopular with the Japanese public, with 55 percent saying they opposed holding the Olympics and 68 percent doubting they can be held safely, according to a poll this week by the Asahi Shimbun newspaper.

Athletics events and soccer matches will be held there during the Games.