The Chinese Communist Party (CCP) is pushing very hard to frame The Battle at Lake Changjin – an expensive blockbuster that shows hardscrabble but determined Chinese troops defeating arrogant American soldiers in the Korean War – as an epochal event in box-office history, the moment when China stole the movie industry away from Hollywood.

To this end, no effort has been spared to juice up Lake Changjin’s ticket sales, from vast amounts of free advertising in state media to essentially telling Chinese citizens it was their patriotic duty to see the film and the Communist Party would be very disappointed if they shirked that duty. In much of China, Lake Changjin is virtually the only movie playing in theaters at the moment. 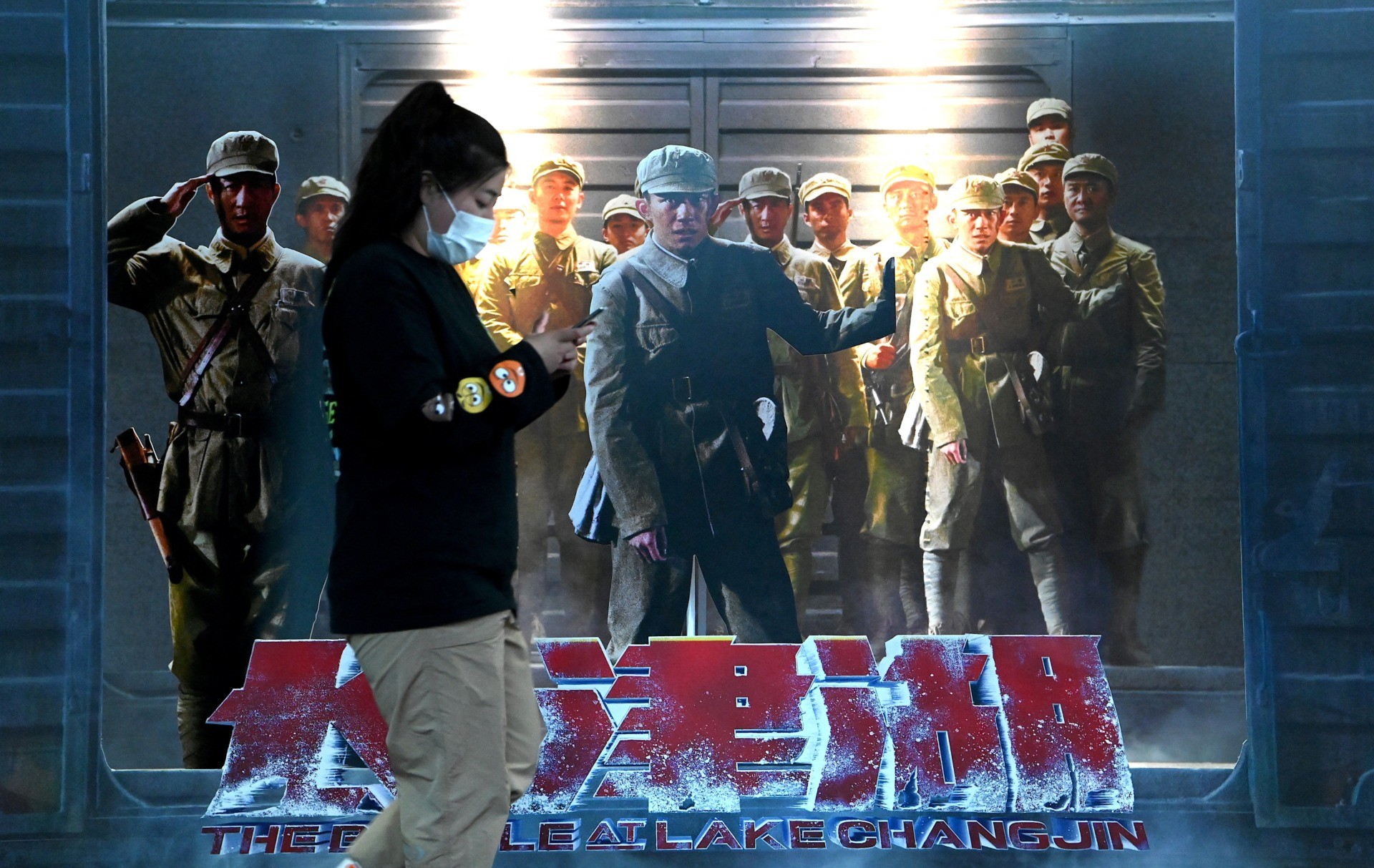 Dune has none of those advantages, but it does have Stellan Skarsgard wearing a fat suit and swimming in a tub of black goo, and that was good enough to nab the top spot at the U.S. box office last week.

Dune substantially outperformed expectations and early projections to pull in $40.1 million – not the best performance of the nascent post-pandemic era, but impressive for a very long movie that still only tells half the story of a weird and convoluted 1960s science-fiction tale that also happens to be available for free to HBO Max subscribers.

Quite a few audience members seem to have decided paying to experience the ravishing beauty of director Dennis Villeneuve’s vision in a theater was worthwhile instead of sitting home and watching it for nothing.

Dune was also a major success for IMAX theaters, where it performed extremely well around the globe. Cinephiles applauded Villeneuve’s movie as one of the best IMAX experiences to date, with a grand scale that shines on those immense screens, and a soundscape that flows right through the viewer’s bones when blasted out of absurdly powerful IMAX speakers.

The movie’s reception was energetic enough to persuade studios Legendary and Warner Brothers to green-light Dune Part Two on Tuesday.

China’s state-run Global Times on Tuesday sneered that Americans should not get their hopes up about riding those gigantic Dune sandworms back to box-office dominance because the movie did not open terribly well in China and the Chinese box office is now indispensable to Hollywood.

“Having premiered in China four days ago, the film has grossed 147 million yuan ($23 million), no match for China’s third-highest grossing film ever, The Battle of Lake Changjin, which has earned 5.31 billion yuan as of Monday night, according to Chinese ticketing platform Maoyan,” the Global Times reported.

The Chinese Communist paper ruminated on why Chinese fans supposedly eager to see Dune are turning away from Villeneuve’s movie. It appeared to conclude Chinese readers of Frank Herbert’s original novels do not think the new film is a faithful adaptation, and the rest of the audience does not understand it.

The Global Times briefly mentioned a bit of scandal surrounding the Chinese advertising for Dune, quoting a social media user who “accused the China African Project – which he claimed is a Twitter account that seeks to undermine China-Africa relations – of posting a photoshopped poster that removed a black actor to try to smear China.”

At least one Dune poster in China omitted black actress Sharon Duncan-Brewster, who plays a race- and gender-swapped version of a supporting character named Liet-Kynes. The same thing was done to Chinese posters for the Star Wars film The Force Awakens in 2015 to remove one of the stars of the film, John Boyega. 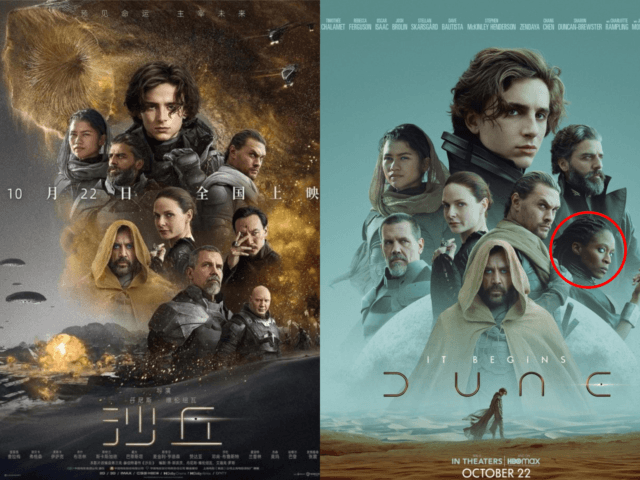 “It is not clear if the new poster was designed by Warner Bros or Legendary East, the firm responsible for distribution in China,” the UK Daily Mail reported on Tuesday.

Forbes speculated Tuesday that even as the Communist Party sends signals to Hollywood and gooses Chinese nationalism by playing up the success of The Battle at Lake Changjin, Legendary and Warner Brothers were engaged in a bit of audience manipulation by announcing Dune Part Two, even though the first film is on track for a total box-office showing that would have been considered disappointing before the Wuhan coronavirus pandemic:

They think Dune part Two will perform better theatrically amid more conventional circumstances than Dune part I (which is still likely going to end up with $375 million-$405 million worldwide).

Announcing a sequel creates the impression of success (think Jungle Cruise 2 and Cruella 2) and encourages folks to check out the movie without fear of ending on a cliffhanger. Legendary perhaps wants to put itself in a rosier position to get purchased by a conglomerate.

Furthermore, whether or not Dune makes money theatrically is less of a concern as long as it’s perceived as a Covid-era theatrical success and/or a launching pad for HBO Max television shows. Absent that, it’d still be a slight disappointment in relation to cost.

Forbes added that a good reason for the studios to proceed with a second Dune installment, despite modest ticket sales for such an expensive movie, is to keep the very notion of theatrical epics and franchises alive in an era of prestige cable, streaming, and simultaneous home/theater releases.

“Barring incredible legs, Dune part I won’t actually make money in raw theatrical revenue. But that we’re (for now) getting a sequel is a sign that it may not matter,” Forbes concluded.