Die Welt reports that protestors in Leipzig have attacked journalists

A column of protestors 60 ft wide and half a mile long estimated in Leipzig Pegida marches.

100,000 people have gathered in the East German city of Leipzig for the latest anti-Islamification marches. 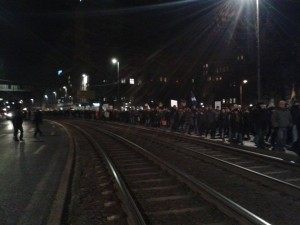 The City’s mayor declared a state of emergency as opposing sides travelled from across the country to take part in Pegida marches and those opposing them.

Breitbart Correspondent Oliver Lane spoke to a group of teenagers who were there to oppose Bachmann and his followers. “They were very polite”, he reported, “but are desperate to fight. “We are ready” they said.”

Trains were packed out between Dresden and Leipzig as people crammed onto carriages and German media reported that two attacks took place on one of the services.

And the anti-fascists gathered on the train tracks to stop any more of the marchers from reaching the City.

But at around half past six, our correspondent reported that a column of the Berlin Pegida had broken through the opposition lines and the atmosphere continued to heat up and fireworks were being set off in the streets.