A former Royal Marine who “wanted nothing more than to bring the fight to the enemy” has become the first British citizen to be killed fighting with Kurdish forces, reports suggest. 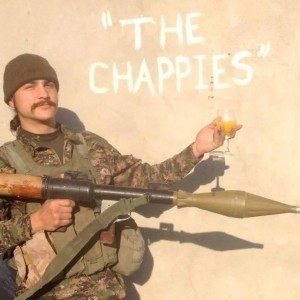 Konstandinos Erik Scurfield, 25, a Greek soldier who took British citizenship and joined the Royal Marines was thought to have crossed the Turkish border to Syria late last year after telling his family in Barnsley, Yorkshire, that he was going to undertake humanitarian work. The former Royal Marine joined the ‘Lions of Rojava’, the Kurdish army’s ‘foreign legion’, manned by Western men but led by Kurdish officers.

A fellow Lion and member of the ‘Chappy’ unit of Anglo-sphere friends, apparently including former soldiers from the United Kingdom, Canada, Australia, and the United States, reported the death of Konstandinos – known as Kosta within the unit, on Facebook. Sharing pictures of Kosta in Kurdish uniform enjoying himself with friends while on patrol, former United States Marine John Fox said: “KIA Chappy Kosta… Hands down one of the greatest people I have ever met in my life. 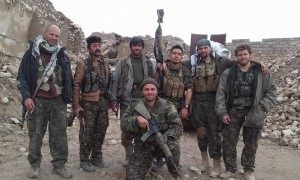 Kosta Kneels With an Assault Rifle in Front of Colleagues / Facebook

“I cannot even begin to describe the character of this man because a Facebook post can no way do it justice…. He deserves so much more than a Facebook post but this is all I can do for now so please keep his family in your thoughts and prayers.

“You will be avenged my brother”.

Another American fighting with the Lions, Jordan Maston praised Konstandinos: “Kosta volunteered for every attack and guard duty opportunity. He wanted nothing more than to bring the fight to the enemy.

“I’m going to carry on your legacy brother, I will never forget you. I love you man.”

The Daily Mail reports the comments of Kurdish rights campaigner Mark Campbell, who had the difficult task of telling Kosta’s mother of his death. He said: “Because of potential language issues I volunteered to inform the family of his death, which I did and spoke to his mother on behalf of the YPG.”

She was completely and utterly distraught – she was crying all the way through. It’s the most awful and horrendous thing and exactly as you can imagine. It was just horrible. The message from the YPG is that although they would like to bury him as one of their own, they are completely and utterly guided by the family’s wishes.

“If the family wishes that the body come home to the UK, the YPG will do everything in their power to facilitate that”.