In 2009 I witnessed a massive illegal cigarette haul. 120 million cigarettes, smuggled into Northern Ireland by the IRA. The seizure, in the heart of ‘bandit country’, was the largest ever seen in Europe, with an estimated street value of nearly £45 million.

More recently, in January of this year, two of the IRA’s most senior operatives, ex-bomber Lenoard ‘Bap’ Hardy and his wife Donna Maguire were detained in Spain, not on terrorism charges, but because of their involvement in a smuggling ring.

You might ask why this matters to someone who more usually concerns themselves with helping small and medium sized businesses. Simple, back in 2009 I sat on a Parliamentary committee concerned with controlling the export and supply of arms. The proceeds of these illegal activities would have been funneled into criminal and terrorist activities including the illegal arms trade. 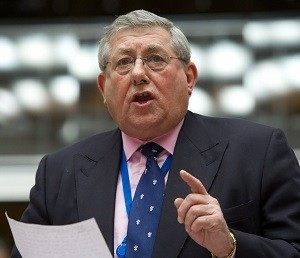 Binley: Plain packs will help terrorists like IS and IRA

But for every successful operation by the police, customs or trading standards many more slip through the net. Indeed the Treasury estimates that the illicit trade costs the Exchequer some £3 billion in lost revenue, while smuggled alcohol costs upwards of £1 billion in lost duty.

South of the border in the Republic of Ireland, Retailers Against Smuggling say the Provisional IRA, the Real IRA, Continuity IRA and INLA are raking in more that €3 million a week from the illegal tobacco trade.

And it’s not only the UK and Ireland that have been targeted by these terrorist groups, but Australia too.

Which is why so many of my colleagues are concerned that this week, our Government has pushed through its plans to introduce standardised packaging.

Many of my colleagues who oppose this policy did not even bother to vote, because the result was a foregone conclusion. The Government knows that failure to implement plain packs, gives Labour an easy hit, with Shadow Health Secretary Andy Burnham and his colleagues accusing the Prime Minister of being in the pockets of Big Tobacco. So with Lib Dem and Labour support, ministers found it easy to push the measure through.

But there are significant unanswered questions about the policy not least about the legality of such a move, the compensation costs and how removing the branding and anti-counterfeiting measures will not lead to an increase in the illicit trade.

A leaked legal opinion that I have seen, from top barrister Lord Hoffman, concludes that if the Government introduces this measure, the tobacco companies will be able to claim substantial compensation. How much compensation is not clear, but BNP Paribas recently put the figure at between £9-11 billion.

The question though that most concerns me is the impact of the policy on crime and smuggling.

Data coming out of Australia suggest that the illicit trade there has jumped significantly, with some illicit cigarette brands overtaking legitimate ones. A report from KPMG, for the industry, found the consumption of illegal branded cigarettes jumped by more than 150 per cent – This despite the geography of the country, making it significantly more difficult to smuggle to than say the UK.

And the nature of smuggling has changed. The romanticised image of an individual, who buys a few extra cigarettes to sell down the pub, is outdated and wrong. Organised crime and terror groups now dominate the supply and networks behind illicit tobacco.

Last month, a report from the think-tank RUSI, commissioned by the Home Office, highlighted how these groups control the illicit trade of tobacco, alcohol and pharmaceuticals, with a series of UK cities and areas referenced as being the end point for a number of complex global smuggling networks. Lancashire, Tilbury, Felixstowe, Dover, Southampton, Birmingham, Leicester, Upminster, Gloucester, Wolverhampton and Belfast act as hubs for the rest of the country.

We have the problem in the UK that there is widespread public tolerance for illicit tobacco. Where there is a good distribution chain and a ready black market for illicit products, the rule of law is undermined. The public should be under no illusion that these gangs and terror groups do not stop at tobacco and alcohol, but smuggle drugs, arms and people.

And it’s not just home grown terror groups involved in this deadly trade. Professor Louise Shelley, an international terror expert, has written extensively about how terror groups such as Al Qaeda, Hezbollah, and IS have turned to other crimes to fund their activities.

So plain packs appears to be playing into their hands by making it easier to counterfeit. Is it any wonder why more than a hundred of my colleagues oppose these plans?

In Europe and elsewhere increasingly, policy-makers are talking about the need to design out crime or crime proof, but plain packaging is a policy that completely ignores these concerns. It will act like Viagra to the UK’s £24 billion-a-year criminal economy as it creates the perfect storm for a flourishing market in illicit tobacco, whose proceeds may well end up funding IS and their barbaric acts in Syria and Iraq.