Church traditionalists have reacted with shock to a full Islamic service being held in a major London church, with the Church of England vicar proclaiming his love for Allah. 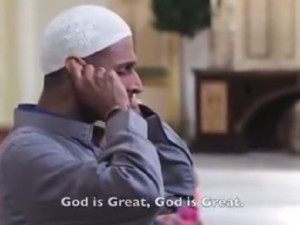 A member of the new ‘congregation’ prays before the Christian altar, seen at the back

Although many official mosques in the United Kingdom are hosted in de-consecrated, former churches abandoned as the nation’s resident Christian population recedes, this is thought to be the first time a full Muslim service has been held inside an active church in England.

The event, which was held to celebrate International Women’s day, was organised through the ‘Inclusive Mosque Initiative’, and has been criticised not only for breaking canon law but for insulting the struggle of persecuted Christians in the Muslim world. Proceedings were kicked off with the Islamic call to prayer, followed by talks and worships, with the ordinary church furniture cleared away to make space for prayer rugs. 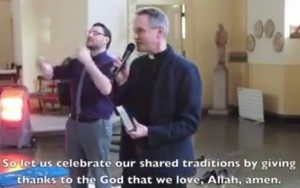 The priests of neighbouring parishes in the diocese fear the church has been ‘taken over’ by liberal interests, with the charge led by super-progressive parish priest the Reverend Canon Giles Goddard. When questioned on the service, he insisted he didn’t foresee any problems, or that hosting Islamic prayer in his church could be controversial, reports the Daily Telegraph. Taking part in the Muslim service, Canon Goddard was recorded saying: “Allah, God, is always with us and always around us, and is within us.

“This is from the Hebrew scripture, so it is our shared, we all share, these great traditions. So let us celebrate our shared traditions to the God that we love, Allah, Amen”. 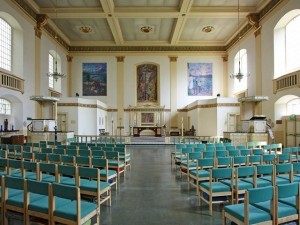 The church interior when set up for more conventional use.

The Telegraph reports the comments of the Rev Robin Weekes, who said of the debacle: “The issue is not primarily that canon law has been broken, which it has, but that it is offensive to Christians who believe that there is only one God, who is the Father of our Lord Jesus Christ.

“And it is especially offensive to those who are being persecuted around the world for their faith in the uniqueness of Jesus Christ.”

In the section of Anglican canon law giving ministers licence to exercise discretion in performing services, the law reads: “all forms of service used under this Canon shall be reverent and seemly and shall be neither contrary to, nor indicative of any departure from, the doctrine of the Church of England in any essential matter”.

The church involved, St John the Evangelist, will be immediately familiar to many visitors to London as it stands directly outside Waterloo station, the busiest in the capital. Built in a distinctive neo-Classical style, it features fluted Doric columns and a simple, diminishing tiered tower. Although heavily damaged and left without a roof for ten years after Second World War bombing, many original features including the significant iron front doors remain.