After publicly humiliating children who didn’t want to go on a trip to visit a mosque, the governors of a small rural school in Cornwall have reacted to concerned parents and national news coverage of the debacle by making the trip mandatory for all students. 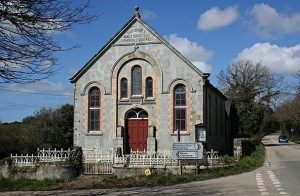 The Cornwall Islamic Centre, converted from a chapel in 2008

Breitbart London reported earlier this week that ten families had not given consent for their children to travel from Lostwithiel School in Cornwall to Devon to visit the Exeter mosque, citing fears about violence and danger to their children from Muslims. Governors have now told parents that absences from the trip will not be allowed, citing the importance of ‘promoting different faiths and ethnicities’ to school-age children.

Despite the school being in one of the least ethnically and religiously diverse counties in England, rising intolerance in Cornwall has been used as the reason for the trip, which will now take place next week. The Independent newspaper quotes Cornwall-resident Muslim Mostofa Abdul Rahman, who said that attitudes towards Muslims were changing for the worse.

Remarkably, the newspaper even managed to claim that plural “Mosques in Cornwall have been defaced with graffiti”, despite there being only one mosque in the whole county, a converted Methodist chapel.

Insisting that parents of young children had absolutely nothing to fear from Muslims, or Islam, school governor Kat Smith who is understood to be the force pushing the trip through against the wishes of parents said: “The visit to the mosque will provide an insight for pupils into the nature of British Islam, help them understand how Islam is presented in the media and that groups like Isis are not a true reflection of the Islam followed by the vast majority of Muslims in Britain”.

“Religious Education forms part of the basic curriculum in schools and its teaching is enshrined in law. The school recognises that parents have the right to withdraw their child from RE in whole or in part, and provide alternative work to further their child’s knowledge and understanding of the parents’ beliefs and values.

“However, the school is aware that children growing up in Cornwall may have little contact with Muslims and it is aware that it has a duty under the Equality Act 2010 to promote good relations between people of different beliefs and ethnicities as part of its single equality duty.”