Britain’s communist newspaper, the Morning Star, has splashed below its masthead on today’s paper a story called: “Exposing the Bigots Behind Breibart [sic]” – a story that reveals how terrified Britain’s left-wing is of Breitbart London, while simultaneously misspelling a headline on their own front page. 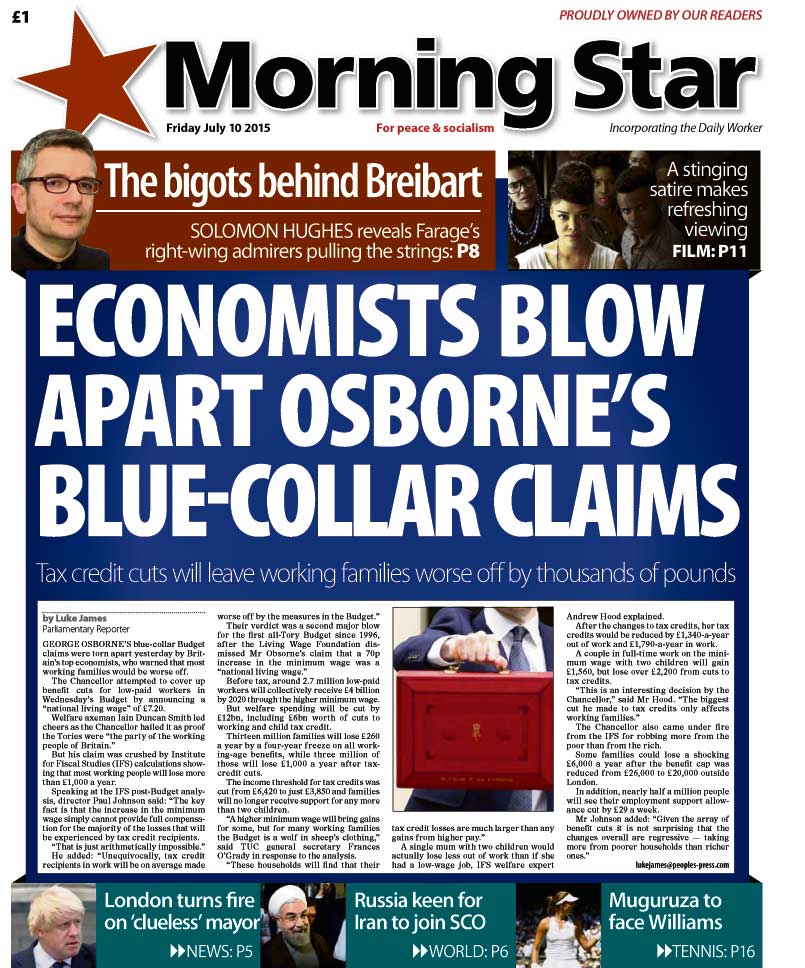 The paper, which describes itself as “the only socialist daily newspaper published in Great Britain”, despite the existence of the Guardian, and the Daily Mirror, said today in a piece by former VICE writer Solomon Hughes:

The Breitbart paranoid work may look unconvincing in Britain, but there are a lot of Tea Party-ish US folk clicking their mice and staring at their screens in the US, so it is fairly successful.

The Spectator called Breitbart a “mysteriously rich right-wing website.” There is a lot of cash around in the US to fund fairly bonkers right-wing projects.

The Morning Star even got Breitbart London‘s launch incorrect, despite “investigative journalist” Solomon Hughes presumably having access to Google:

Breitbart has set up a British wing under James Delingpole, a British journalist who tried — and mostly failed — to be a right-wing “personality.”

This website began flirting with Farage, and he winked back at the US-funded outfit.

Raheem Kassam, a former Conservative Party activist, first took a job with Breitbart, and then as a senior adviser to Farage.

Kassam is British, but he is an admirer of US-style Tea Party politics, and in turn was much liked by those behind Breitbart.

His work then leans heavily on a Spectator article which itself lent heavily on background briefings from UKIP press officers who found themselves out of favour with Nigel Farage and the party leadership during the 3.8 million vote-winning election campaign:

As the Spectator tells the tale, this shows that Farage was tempted by these US-funded types who promoted a “Tea Party tendency” in Ukip, whose attempts to launch an aggressive, US-style culture war destabilised Ukip.

Farage was once able to build a right-wing party by making it look down-to-earth and very British, to appeal to full-on bigots but also not frighten the horses of the horse-riding set.

But the brash US rightwingers spoiled all this.

“British politicians are easily seduced by American money and power, and it seems Farage, for all his anti-elitism, was no exception,” said the Spectator, with sadness.

Many of us aren’t sad at all about the Ukip self-destruct. But it is an interesting lesson about transatlantic traffic on the right.

But it’s clear Mr Hughes and his ilk are worried:

US rightwingers have big money and loud voices, so can be a creepy influence on British politics.

But they mostly deal with a naive and supportive US audience so their schemes sometimes fall apart when they try and run them in Britain.

What the Spectator carefully avoided saying was that Kassam was also director of campaigns at the Henry Jackson Society.

This is another transatlantic right-wing group, that spends its time supporting US foreign policy — even if that means endlessly defending the CIA against charges of torture.

Some top Labour MPs — including shadow cabinet member Chris Bryant — should wonder if they still want to be members of a group that can employ Kassam, a man too divisively right-wing even for Ukip.