The Saudi King has added to his list of outlandish demands on locals as he takes a brief holiday on the French Riviera. His Royal Highness has reportedly demanded that no female police officers be stationed near the beach where he is staying with his 1,000 strong entourage. 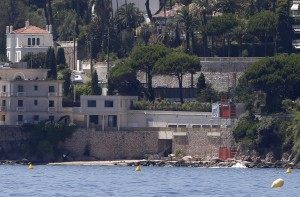 A partial view of the villa (L) of the Saudi King with newly built elevator (red) to access the nearby public beach.

The fiasco began at the end of June, when King Salman bin Abdulaziz Al Saud demanded an entire public beach be closed off for the duration of his stay, prompting 140,000 people to sign a petition against the move.

Then he insisted the French president fast track though planning permission to construct a lift on the beach, so he didn’t have to use the steps, and a walkway, so his feet didn’t have to touch the sand.

And now, he wants to impose gender segregation on a public institution. The claims emerged on Tuesday in the magazine Marianne, and were confirmed to The Local by David Michaux, a representative from the UNSA police union.

“The French police are there to do a job, not to be the victim of discrimination,” he said. Explaining that an emissary of the Saudi royals had asked a female officer to leave the beach on Saturday in case she should see any member of the King’s entourage.

“The officer didn’t appreciate it at all. She’s there to do her job,” said Michaux.

Later on Saturday, another female officer was asked to move away from the villa in case she set eyes on the men.

“They made her understand she couldn’t be in view of the villa… We don’t understand. The police are there to protect the people. We are not there to watch people bathing or whatever they do,” said Michaux.

The Ministry of the Interior is thought to have got involved in an attempt to prevent further disputes. The King is due to leave in mid-August, until then it looks as if he will get what he wants and women will be kept away.