Migrant teenagers living in Germany are shamelessly showing off their spoils from pick-pocketing sprees while the German police look on, powerless to act. While most are waiting for asylum claims to be processed, their crimes are unlikely to affect their residency applications as they are deemed too minor. 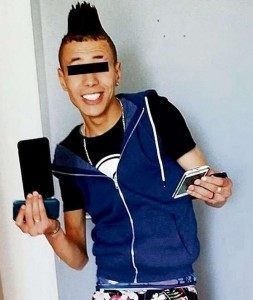 The criminal migrants have been dubbed the ‘klau-kids’ (‘klau’ being a German colloquial word for ‘theft’), and they practice their crimes with apparent immunity. Many take to the internet to post pictures of themselves posing with the fruits of their crime sprees – laptops, smartphones, cash, cameras, designer sunglasses and other attractive goods.

Police estimate that there are as many as 150 klau-kids in Berlin alone, many of whom are well known to the authorities. A 19-year-old youth referred to as ‘Walid K’ by the newspaper Bild is the subject of 10 separate investigations for theft. Another, ‘Ismat O’, who claims to be a 16-year-old Tunisian has been detained no less than 20 times.

It is “incomprehensible that such serial offenders do not sit in pre-trial detention,” Bodo Pflazgraf, Chief of the German Police Union in Berlin has said.

Martin Steltner, spokesman for the Berlin public prosecutor said: “Legally, we need to have strong suspicion. That is why prosecuting pickpockets is often very difficult.” He explained that the offender would have had to have been observed by a credible witness, but that is very rarely the case.

Pflazgraf was dismissive, however, pointing out that in many cases judges are not prepared to issue arrest warrents for crimes deemed to be minor in nature, such as pick-pocketing. “Each judge seems to have their own reason as to why the offender should not be in custody,” he said.

Most of the klau-kids come from Eastern Europe or North Africa, but hold either no passports or multiple passports making it difficult for the authorities to formally identify them. But often they have applied for asylum, living in Germany without residency papers while waiting for their case to be decided. Pflazgraf criticised the fact that police investigations into the thefts have little influence on asylum procedures.

Section 53 of the Residency Act states that migrants can only be deported if they have been convicted of a prison sentence lasting three years or more. But Pflazgraf believes the case for allowing offenders to apply for asylum at all “should be examined.”