Following yesterday’s renegotiation-apologist article by Conservative Party MEP Daniel Hannan, I dissected his claims and statements, raising questions as to why he was talking about successful renegotiations, especially using the phrase: “If the polls swing far enough our way… Brexit will become unnecessary.”

Cue the outrage from the establishment ‘Vote Leave’ campaign and the people they’ve duped thus far.

Personally, I couldn’t see the fuss. I simply raised questions. At no point did I say, “OMG HANNAN IS A FUCKING TURNOUT, KILL HIM!”

I actually, rather calmly for me, pondered on his language. I even concluded: “Either he’s playing a really dangerous game, giving succour to the In campaign, or he’s got an ace up his sleeve. God I hope it’s the latter.”

But this wasn’t good enough for the establishment types, who came out swinging today, demanding that NO ONE READ BREITBART LONDON EVER just in case it doesn’t suit their agendas. It was a who’s who of Westminster cocktail party types. David Cameron’s schmoozers and Tory campaign assistants: Tim Montgomerie, Guido Fawkes, Stephen Pollard, and John “I Love Tony Blair” Rentoul.

And I heard all sorts of arguments this morning from their followers on Twitter, about how I was the one responsible for “splitting” the campaign. Let me explain something to you, and if you disagree, just close this web page because we’re never going to agree:

Daniel Hannan used his platform of 62,000 Twitter followers (and no doubt it’ll appear on his Facebook too) to claim that Brexit may not be necessary. He even wrote: “Nothing would make me happier than for the PM to come back from Brussels with a deal that we could support”.

Some people have said, “Yeah but read the WHOLE piece, Raheem!” I have, multiple times over. And I don’t think I’m the one giving succour to the other side.

Is it helpful for me to write about this? In the short term, probably not. But in terms of getting people like Mr. Hannan – who has consistently backed Turkey’s EU accession (yes, this Turkey) – to commit to campaigning to leave, despite the fact that “nothing would make him happier” than to support a Cameron-Brussels deal, it is important.

And that’s precisely what he’s done this morning: 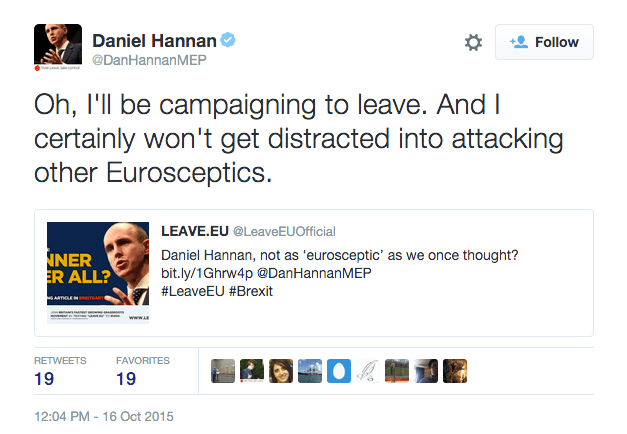