(AFP) — A German mayoral candidate active in helping refugees was seriously wounded on Saturday in what police described as a stabbing with a “racist political” motive, heaping further pressure on Chancellor Angela Merkel over the migrant crisis.

The German leader expressed her “shock” over the attack which took place in the western city of Cologne and left mayoral hopeful Henriette Reker with serious neck wounds.

The incident took place in an atmosphere of growing tension in Germany where Merkel’s open-door policy towards Syrian refugees has faced a backlash from her conservative allies and spawned a growing number of increasingly vocal protests by the far-right. 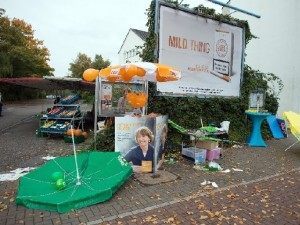 So far this year, more than 630,000 people fleeing war and misery in the Middle East and Africa have landed on Europe’s shores, testing the limits of the continent’s generosity.

Most have headed for Germany which so far this year has taken in more than 575,000 asylum seekers, with the number seen rising to as many as a million by the year’s end, presenting the German chancellor with her greatest domestic political challenge since taking power nearly a decade ago.

Henriette Reker, an independent close to Merkel’s ruling Christian Democrats (CDU) who was responsible for handling refugee issues in Cologne, suffered serious stab wounds to the neck when she was attacked while manning a party information stand in the city.

Four other people were also injured, one of them seriously, with regional regional police chief Wolfgang Albers saying it was a “political act”.

The attacker, a 44-year-old unemployed man, was arrested at the scene, telling police he had “a racist motivation for committing this act,” Cologne police official Norbert Wagner said at a news conference.

Justice Minister Heiko Maas said the attack on Reker, a leading candidate in Sunday’s election for mayor of Cologne, condemned the attack as “an unimaginable and abominable act”, while regional president Annelore Kraft described it as an “assault on democracy”.

Reker is seen as standing a good chance of securing the mayorship in Germany’s fourth-largest city, which has 980,000 inhabitants.