The president of the Czech Republic has said opponents of Islam should not be referred to as extremists at a rally today advocating closing the Republic’s borders to Muslim migrants. 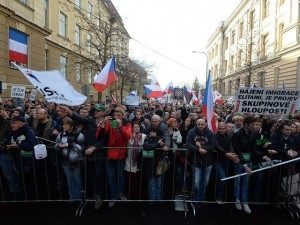 Speaking to a crowd this afternoon that included observers from Germany’s PEGIDA movement and Britain’s Tommy Robinson, president Miloš Zeman was a guest of the Czech political action group ‘Block Against Islam’.

Speaking on stage, the president said nobody else would be able to dictate to the Czech people, and took aim at the mainstream media, which he accused of “massaging” the migrant crisis for their own ends. He took a strong position defending free speech, remarking that everyone had the right to an opinion, but Czechs should never try to silence people with opposite views.

‘Block Against Islam’ have been active in the Czech Republic in agitating against the ingress of Islam into the country. Breitbart London reported in August how the group erected blooded statues of women in Islamic dress around the city in a warning over the Muslim practice of stoning women to death. Signs reading “Pregnant after Rape” or “She Was Unfaithful” along with the now familiar no-Mosques logo were placed with the statues to hammer the point home.

The 17th of November is the Czech Republic’s national day, and it is significant the president took time out of his busy schedule of official events over the day to speak at an anti-Muslim rally. The date commemorates the 1989 Velvet Revolution, and the end of communism in the country.

President Zeman is one of a growing number of Eastern and Central European politicians who are becoming increasingly vocal in their opposition to mass migration to Europe and the Islamification of the continent. Breitbart London has reported at length on the announcements of Hungarian prime minister Viktor Orban, who as well as building a secure fence to protect his own people has provided moral leadership for the rest of Europe with his words.

Speaking to the Hungarian parliament on Monday, Viktor Orban said that the EU plan to force member countries to take a compulsory quota of migrants is unlawful and will “spread terrorism around Europe.”

“As long as this government breathes, there will be no quotas and we will not take in any refugees,” Mr Orban said.

Poland’s new right-wing government is also making itself felt, with foreign secretary Witold Waszczykowski today stating Europe’s mass migration obsession had to end in the aftermath of the Paris attack. He said: “Europe acted unwisely, taking them on such a scale and in an uncontrolled manner. Politicians committed errors. Germany encouraged them”.