End of year statistics released by the Federal German state of Saxony has shown a steep increase in immigrant crime, with a growing number of multiple offenders responsible for the rise since 2014.

The increase is significant in the east German Free State of Saxony, as it lies outside the most heavy migratory path which is concentrated on southern state Bavaria. As the state is in the opposite direction of travel from the route leading to Berlin, France, Belgium, the United Kingdom, Sweden, and other popular migrant destinations – Saxony has received some of the lowest numbers of migrants of any state in Germany.

Despite having been largely bypassed by the migrant invasion, there have been more than 45,000 immigrants in the Free State this year, compared to a Germany-wide total of over one million.

Officially defining immigrant crime as having been committed by individuals who count as “asylum seekers, tolerated foreigners, quota civil war refugees, and persons who illegally reside in Saxony”, the official report found overall migrant crime has risen 47 per cent. 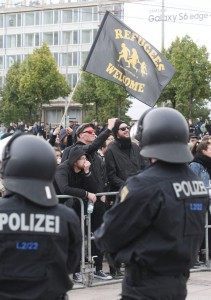 his figure excludes the number of so-called “migrant law violations”, where individuals have entered Germany without permission as illegal migrants. As the German federal government recently admitted, there were now more migrants in the country than they were able to reliably count and keep track of, so the true number of migrant law violations may be difficult to ascertain.

In the months from January to September 2015, the Saxon government recorded some 4,695 immigrants as the prime suspects in crime committed, indulging in some 10,397 offences. This compares to 3,104 immigrant criminals and 7,029 offences in the same period over 2014, a 47 per cent increase.

While the left-wing Saxon interior minister Markus Ulbig insists the statistics prove “the vast majority of immigrants in Saxony behave legally”, what it also shows is the remarkably high offending rate among immigrants.

The figures show over ten per cent of all migrants in the Free State are suspected or convicted of criminal activity, while across the general German population those incarcerated resembles less than 0.1 per cent of the population.

The most common crime committed by the immigrants in Saxony is theft — in fact they commit 75 per cent of all thefts in the state. The other highest areas are fare evasion (so-called Schwarzfahren or ‘black riding’, a traditional German term for fare evasion which is the subject of campaigns by left-wing politicians who wish to see it consigned to the dustbin of history for being racist), assault, and drug offences.

There have also been 17 murders committed by migrants in the state this year, and five rapes.

While Tunisian entrants make up just four per cent of arrivals to Saxony, they make up a quarter of all criminal suspects — the largest single criminal migrant group, and well over represented in crime statistics.

Saxony is the home of the Patriotic Europeans Against The Islamisation of the West (PEGIDA) movement, which was founded in capital city Dresden at the end of 2014. While some have criticised the movement for apparently protesting against a non-problem, as Saxony is perhaps the least multicultural and migrant-afflicted state in Germany. Some within the PEGIDA movement itself have countered that it is exactly for those reasons they protest against mass migration, as they have the most to lose.