French officials say a knifeman, possibly wearing an explosive vest, who attacked a Paris police station has been shot dead.

Police sources say the knifeman attempted to enter the building in the 18th Arrondissement in Paris just moments after a President Francois Hollande gave a press conference talking about increased security measures in the country.

Le Parisien reported that he was wearing an explosives vest. Pictures have emerged on Twitter (above) of a bomb disposal robot apparently being used to inspect the man’s body.

Local residents of the Rue de la Goutte d’Or in the 18th Arrondissement were instructed to close windows and stay away from their balconies.

Witnesses have suggested the knifeman, who was running towards the Paris police station when he was shot by policemen at around 12pm local time (11am UK time) had been shouting “Allah hu Akbar”.

Today is the year anniversary of the Charlie Hebdo attacks in Paris, when Al Qaeda linked gunman stormed the offices of the satirical magazine and murdered 15 journalists because they had published depictions of Muhammed.

As many as 10,000 soldiers have been deployed across France in what is know as Operation Sentinelle. Authorities have been anticipating trouble and police were overwhelmed in the wake of the Charlie Hebdo shootings one year ago.

THIS LIVE BLOG IS NOW CLOSED

UPDATE – 3:20pm GMT: The Paris prosecutor’s office has revealed that the dead knifeman was carrying a mobile phone and a piece of paper on which were the Islamic State flag and an “unambiguous statement” written in Arabic.

UPDATE – 1:53pm GMT: Residents are now being allowed to return to their homes as roads in the area are reopened.

UPDATE – 1:35pm GMT: Police are now extending the security cordon around the site of the incident to confirm no other assailants are at large. Residents are reported to be very calm as French officials say they have no specific reason to believe there may be other suspects.

UPDATE – 1:18pm GMT: France24 reports the attack took place in an area of Northern Paris where 35 per cent of the population is of immigrant – mainly Algerian and west African – origin, a high proportion of which are Muslims. The area around the police station remains cordoned off. According to witnesses the knifeman who was shot twice shouted “incomprehensible gibberish…like a drunk man” as well as “Allah Hu Akbar”. 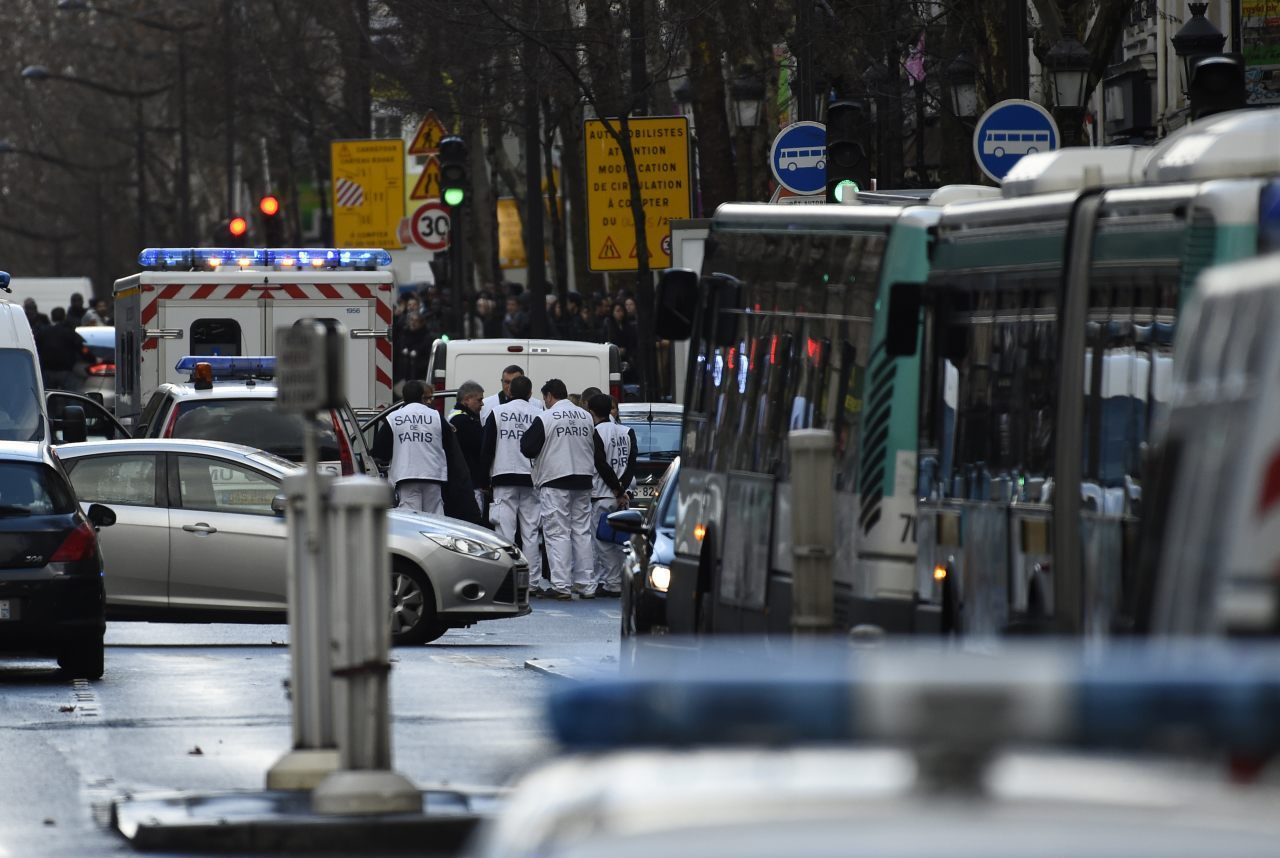 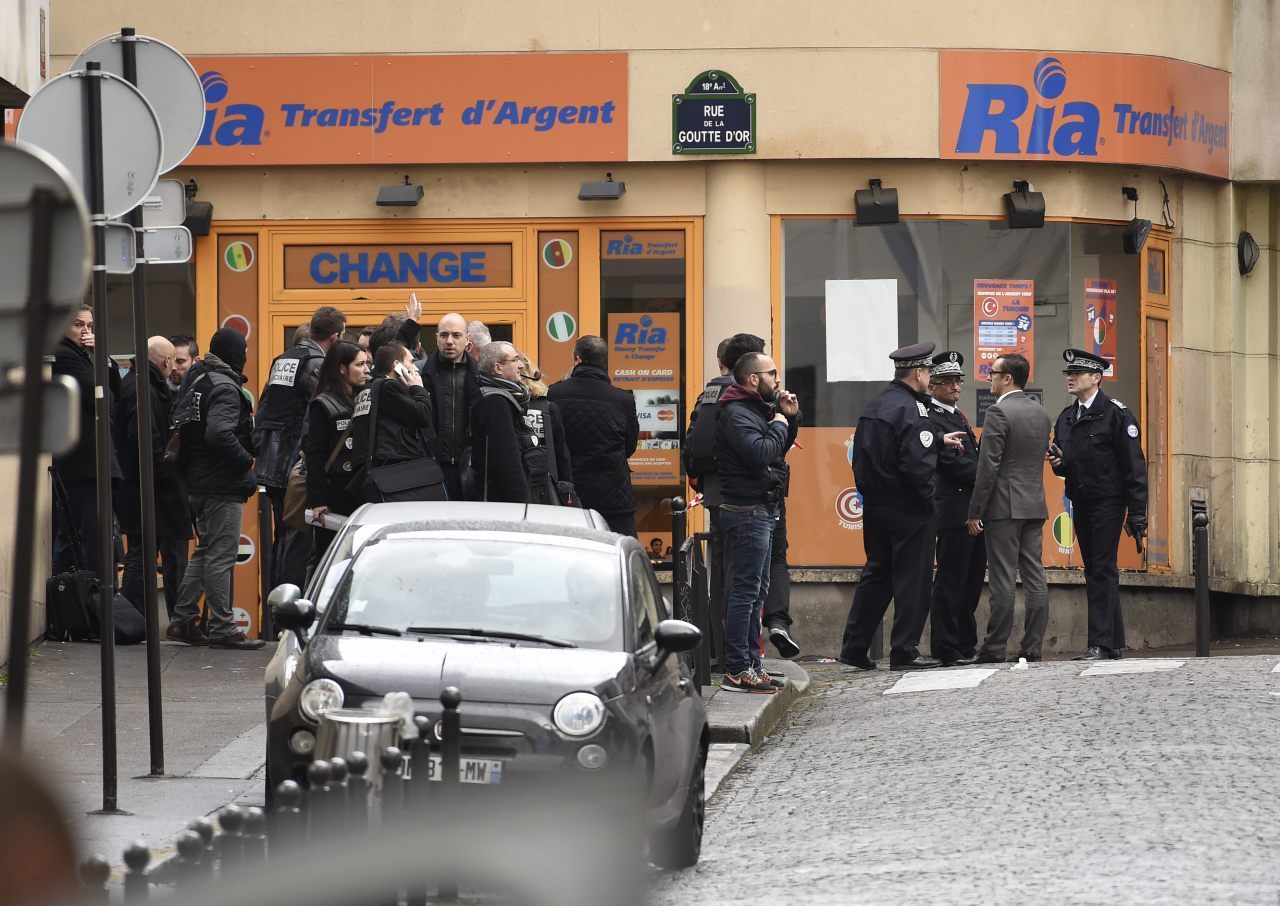 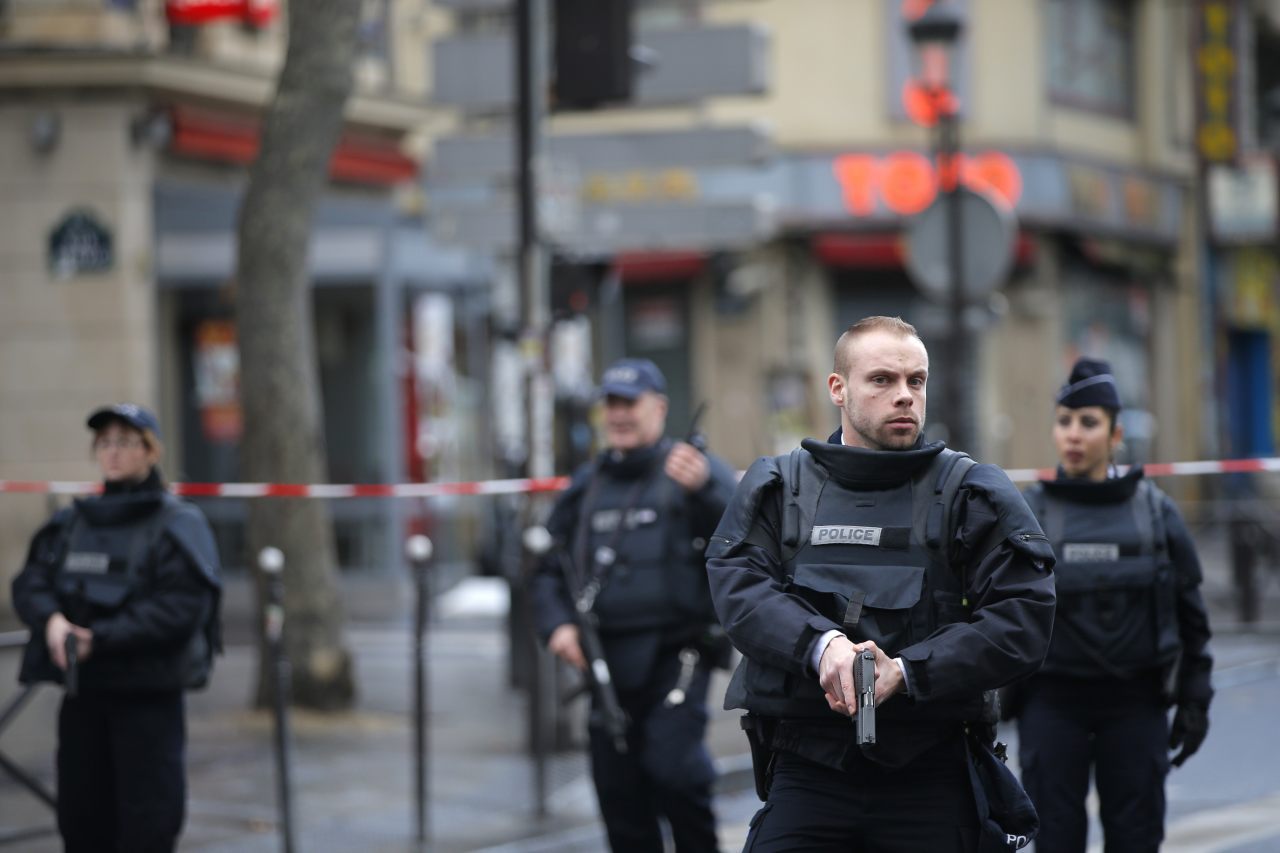 UPDATE – 12:51 GMT: Le Monde reports the testimony of Lydie Quentin, the president of a nearby business: “I heard about five shots… the police asked me not to go out. It’s the only instruction we had. Around me, all shops have complied with the instructions, lowering their curtains.”

UPDATE – 12:49 GMT: Nearby metro lines were shut down, but have now been restored with significant delays.

UPDATE – 12:46 GMT: Two nearby schools are on lockdown as a “precautionary” measure. Children and staff have been confined securely within the schools near the site of the attack.

UPDATE – 12:44 GMT: President Hollande earlier addressed France’s security forces at Paris’ police headquarters telling them any attack on a policeman or fireman was not just a crime but “an attack on the Republic” perpetrators of which “will be mercilessly hunted down, caught and punished in the appropriate manner.” 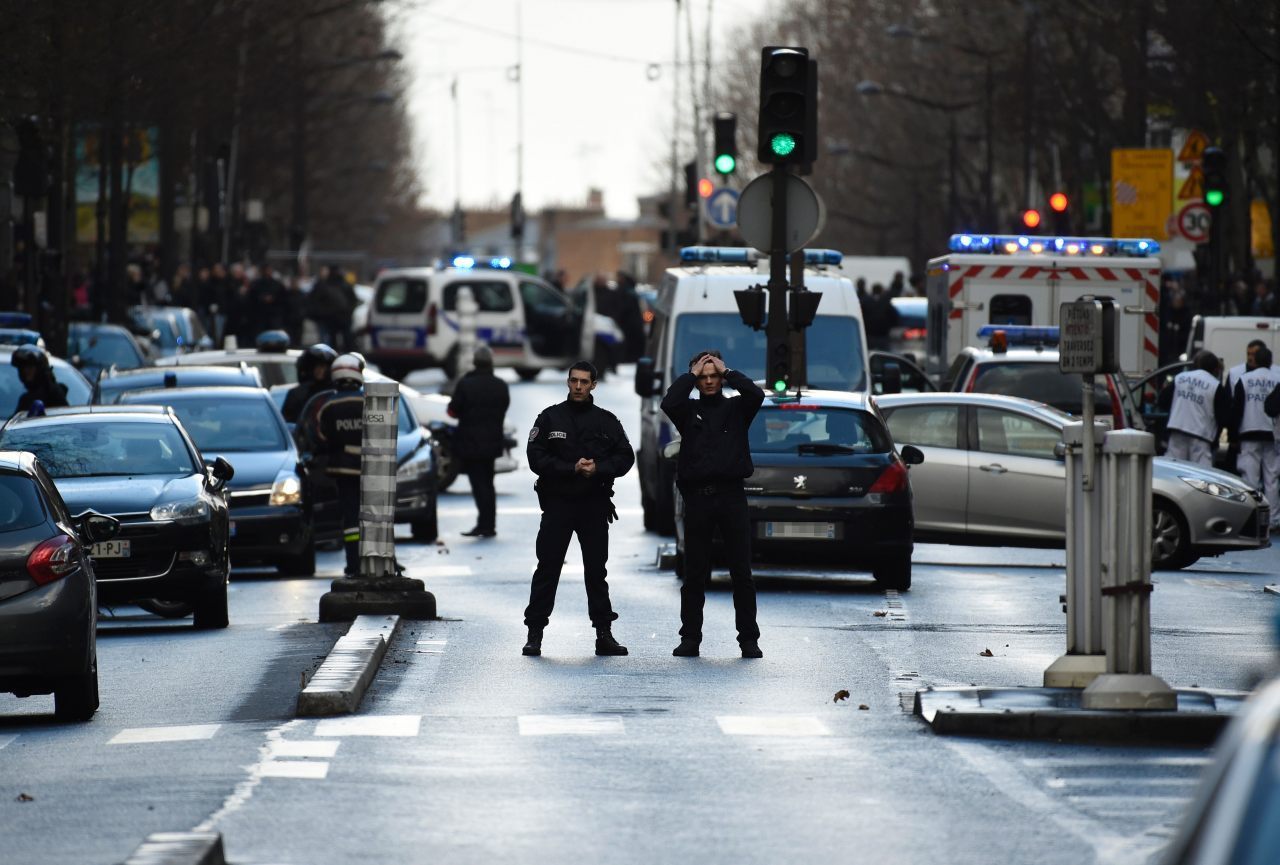 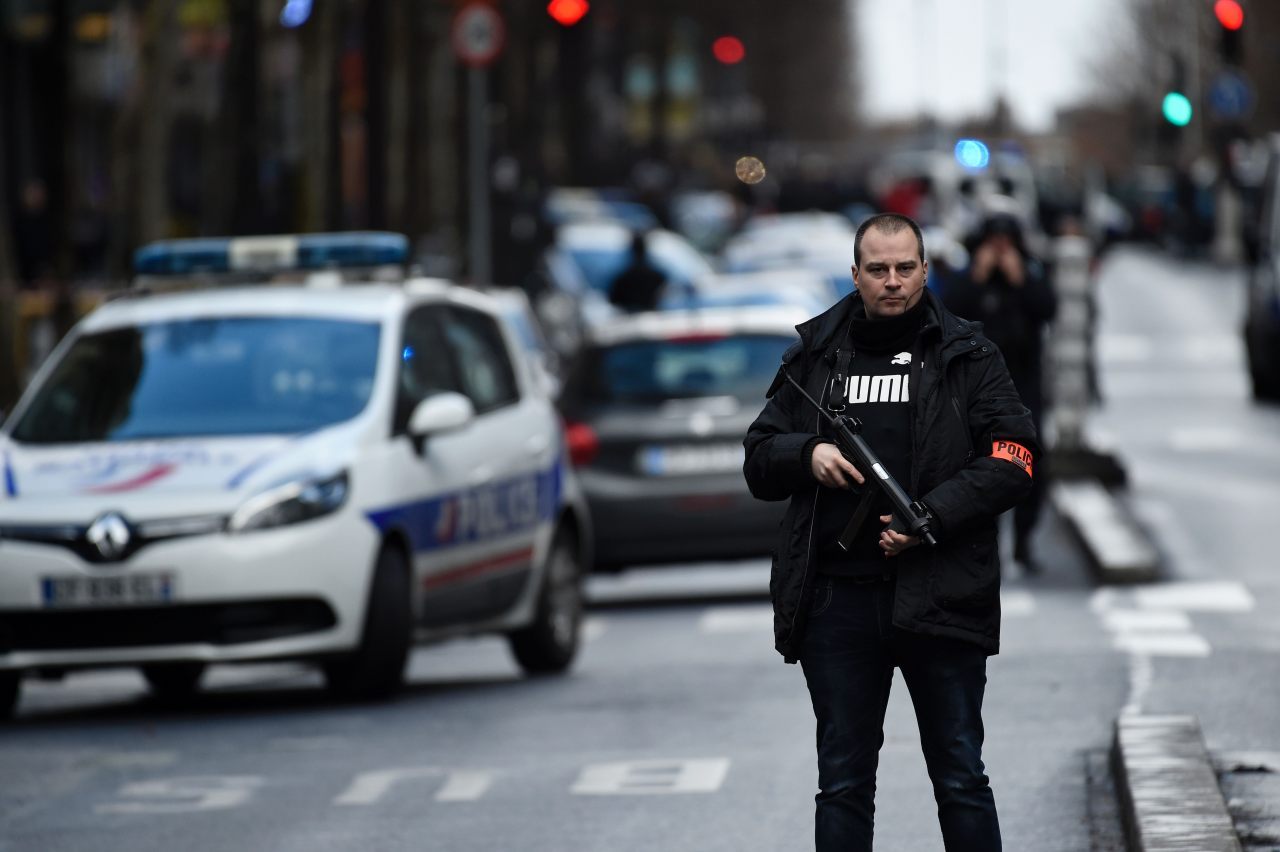 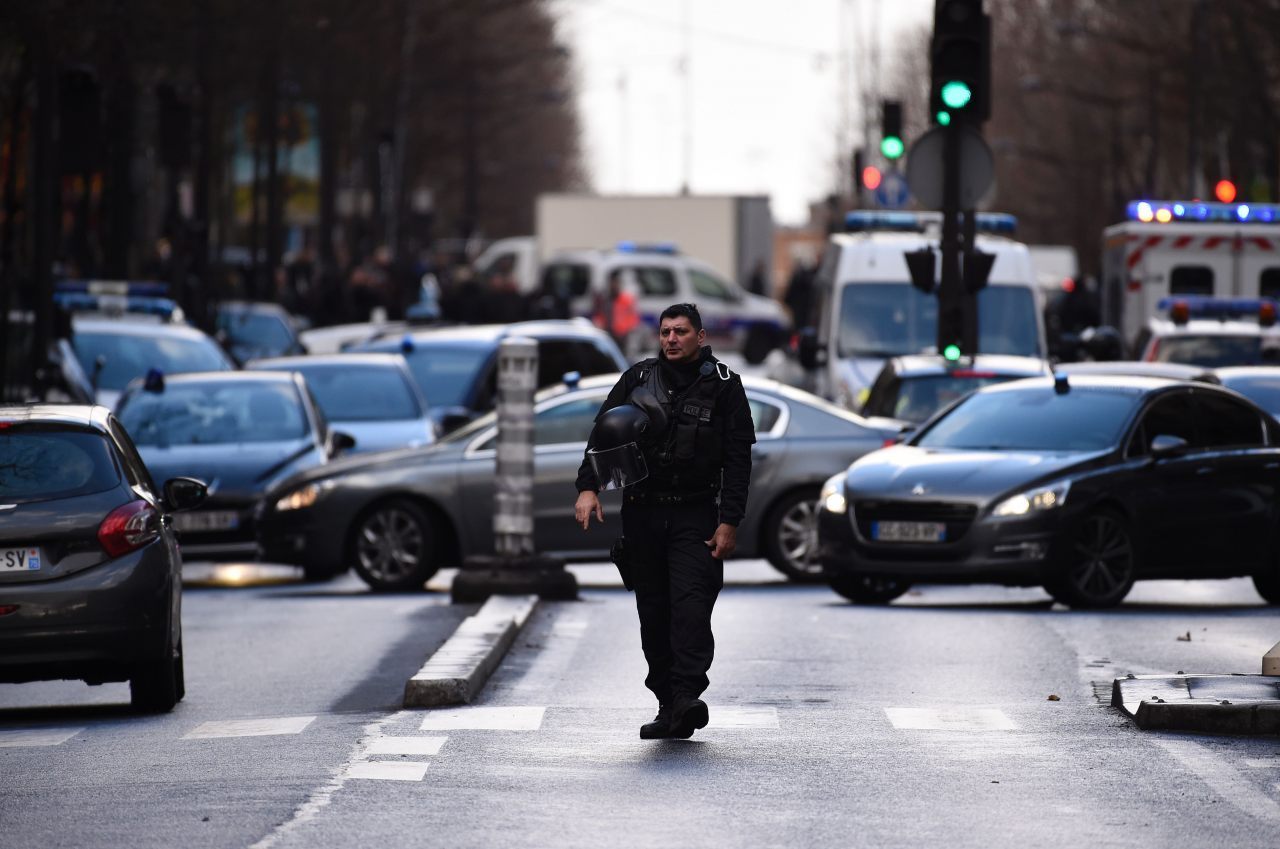 UPDATE – 12:26 GMT: France 24 reports that while police officers report the man had “wires” extending from his chest, that they now believe the explosive vest was a “fake”.