Stunning figures from the European Commission (EC) reveal that cities with the most migrants claim to have the worst standard of living.

The Daily Mail reports a new study by the EC surveyed 500 people per city across 83 cities in Europe asking them a range of questions about their standard of living from housing, education and perhaps most importantly, how migration has effected their lives last year.

The migration question was posed in the form of how content the citizens were with the integration of foreign nationals, specifically migrants from the recent migrant crisis that started last year.

As expected, the largest amount of discontent has come from areas that have been classically associated with large populations of migrants even before the migrant crisis like the Swedish city of Malmo which had a 65 per cent rate of discontent with integration of migrants. Malmo has become recently known world wide for the spate of grenade attacks, gang violence, and ethnic conflict that has changed the crime statistics of Sweden drastically. 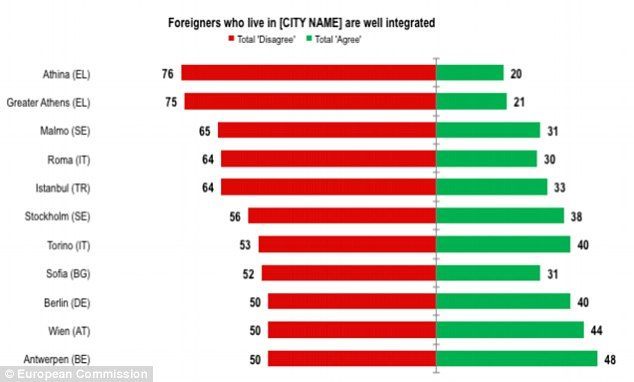 Athens has come first at 76 per cent which correlates with the amount of migrants coming through Greece. Migrant numbers exploded in the summer of last year and with the closing of borders in neighbouring Macedonia it is likely Athens and Greece in general will find more and more migrants staying in the country unable to make their way on to their ultimate destinations of Germany, Sweden or the UK.

Rome is also high on the list at 64 per cent as the rate of West African migrants who come to Italy via Libya is steadily increasing and may soon eclipse the number of migrants travelling to EU states via Greece. Frontex, the EU border agency in charge of looking at illegal border crossings into the union, has released a detailed report in which it breaks down the methods and motivations of West African migrants who enter Italy.

They are described as “aspirational migrants” who come to the EU for the wealth and prestige of being a “somebody” when they return to their home country according to the Frontex report.

The last survey of this kind was taken in 2012 and the results are striking when compared to the most recent ones. Sofia, Bulgaria for example went from a 49 per cent positive view of migrants to only 31 per cent in the newest report. Every single Italian city surveyed scored extremely low with Rome scoring the lowest.

Berlin and Stockholm, currently bearing the brunt of the migration crisis as many migrants make those cities their ultimate destination, thanks to the generous benefits by both nations, have negative views of migrants. While less than Rome or Athens, they still have at least a 50 per cent opinion that migrants are not well integrated. Given that these surveys were carried out between May and June of last year, before the migrant crisis really started to gain momentum, a survey conducted today may well have very dramatically different results.