The centre left is dead in Europe.

This is the heartening the conclusion of a survey in the Economist which shows that electorates across Europe have lost patience with the squishy, soft-left, metropolitan ‘Social Democrat’ elite which has dominated their politics for the last seventy years.

Early in this century you could drive from Inverness in Scotland to Vilnius in Lithuania without crossing a country governed by the right; the same would have been true if you had done the trip by ferry through Scandinavia. Social democrats ran the European Commission and vied for primacy in the European Parliament. But recently their share of the vote in domestic (and Europe-wide) elections has fallen by a third to lows not seen for 70 years (see chart 1). In the five European Union (EU) states that held national elections last year, social democrats lost power in Denmark, fell to their worst-ever results in Finland, Poland and Spain and came to within a hair’s-breadth of such a nadir in Britain.

Here is the chart that says it all: 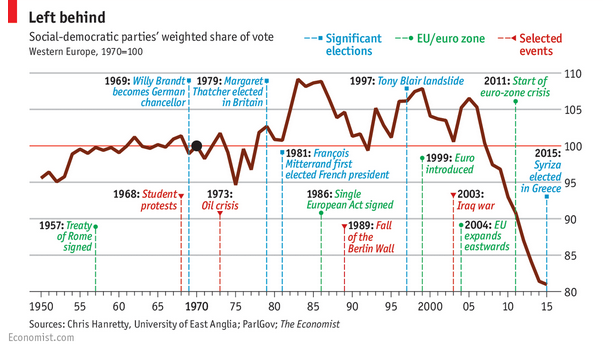 To read the Economist’s accompanying commentary, you might think that this was a sad loss. But then the Ecommunist is the house journal of the Europhile corporatist and technocrat elite who were responsible for this Social Democratic stitch-up in the first place .

The Economist gets where the votes have gone:

Many have been hoovered up by populists, typically of the anti-market left in southern Europe and the anti-migrant right in the north. But alternative left parties (feminists, pirates and greens, for example), liberals and the centre-right have also benefited. And so has the Stay On The Sofa party.

What it doesn’t seem to understand is why they have gone there. It comes up with a four-part explanation – “its own success, structural change in the economy, a reduced fear of political extremes and the decline of monolithic class groups” – which I’m afraid is so turgid I can’t be bothered to elaborate, you’ll just have to read the piece if you’re interested which I really wouldn’t recommend. (The Economist is designed to sit on your coffee table, impressing your visitors; not actually to be read).

But it’s surely much simpler than that. Voters are going elsewhere because they can see that Social Democracy has failed them.

It has failed them economically – as the vast youth unemployment in countries like Spain, Italy and Greece can testify; not to mention the shrinking size of the Eurozone economy generally.

It has failed them socially by inflicting on them a wave of immigration by people from an alien culture which has no intention of assimilating with or showing any gratitude to the nations now hosting it.

Unfortunately, because the same Social Democrat elite is running the European Union none of this is about to change any time soon. It just means that across Europe, voters are going to feel more and more frustrated with the unaccountable governing caste and will vent their frustrations by throwing in their lot with ever more extreme parties. This cannot but end very unhappily – which is ironic, given that the raison d’etre of Social Democracy, or so the Social Democrats keep telling us, is that it brings us all peace, consensus and stability.