The wall lamp, which was supposedly posted on Amazon.de, appears to be a Photoshop of existing lamps by the “Maishang” company and was listed on the site before it was ultimately taken down. The entire article was an April Fools’ joke by German magazine Stern.de, who used the occasion to compare the AfD to Nazis.

In the description of the item the seller promises a “modern and stylish design that is ideal for your indoor home.” It is not really clear what is meant by an “indoor home” exactly, but one of the first signs that the lamp is likely a fake is the fact that it’s advertised as “1930’s modern style.” 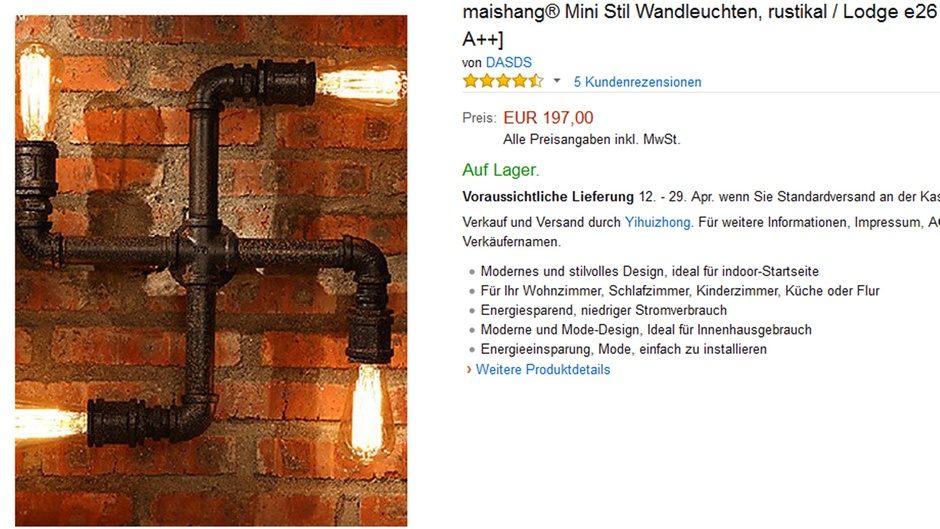 ‘Screenshot from Amazon.de’, published by Stern.

The reviews ran from satirical to overtly political. One “reviewer” commented how durable the lamp was saying that it’s “still burning in the Fürherbunker,” in Berlin where Nazi leader Adolf Hitler committed suicide on April 30th, 1945.

Another reviewer stated that the lamp “arrived safely,” but they complained that,  “the instructions require you to hold your right arm stretched out the whole time during the assembly. It’s too complicated.”

The magazine used other fake reviews  to attack the AfD party who campaign against mass migration and are often labelled as Nazis by detractors. One review apparently stated: “I have searching for a long time for a lamp to illuminate our cellar where we keep the AfD voters and I’ve finally found it.”

Users on Twitter saw through the ruse immediately and slammed the publication for using the long time tradition of April Fools’ jokes to push a political agenda.  One user said the article was, in his opinion, “tasteless, pathetic comments by intellectual illiterates,” and another said sarcastically, “how original.”

Swastikas are one of the many Nazi-era symbols that are banned in Germany and, other than special requests for films and academic pursuits, the display of them is illegal and can carry hefty fines and, even in some cases, time in prison. One twitter user brought this up in reply to the article and asked, “are you advertising and recommending unconstitutional symbols?”

It’s unlikely German police would pursue charges in such a case but the entire article has raised serious questions in the minds of readers as to the potential bias the magazine may be exhibiting toward the AfD.

It also isn’t the first time the German press has tried to associate the AfD with PEGIDA and with fascism. In an overtly aggressive interview with Deutsche Welle, AfD leader Frauke Petry was asked repeatedly if she supported PEGIDA which the interviewer labelled as a neo-Nazi group “in pinstripes.”