I’m thinking of making this a regular column – “I Told You So”. Because I always tell you so, and you all slag me off, and then it turns out I was right.

Think about it: Douglas Carswell, Patrick O Flynn, Suzanne Evans… and there are other things besides UKIP politics too. I predicted on Jan 1st this year a UK paper would go “online only”. The Indy did. I predicted Tablighi Jamaat would become a major radicalisation talking point – the BBC have just started picking it up. Oh and I reckon Emmanuel Macron is going to be the next French President. But I take no responsibility if you place bets and lose money.

So imagine how utterly unsurprised I was, given my history with the Shakespeare wanker, to see that two ‘Vote Leave’ senior figures have already started slagging off UKIP and its members: Daniel Hannan MEP and Gisela Stuart MP.

Don’t forget, the official designation was handed to Vote Leave in part because of their perceived ability to represent other anti-EU campaigners, as well as outreach to other Eurosceptic groups and parties. They’ve already failed.

Today, Mr. Hannan had the gall to tell his Twitter followers that UKIP-Tory defector Amjad Bashir – a man with a seriously questionable past (more here too) – is more use to the Leave campaign that “most UKIPers”. 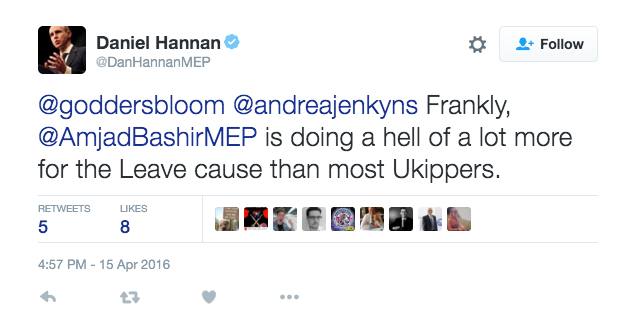 His comments went down like a cold cup of sick, naturally: 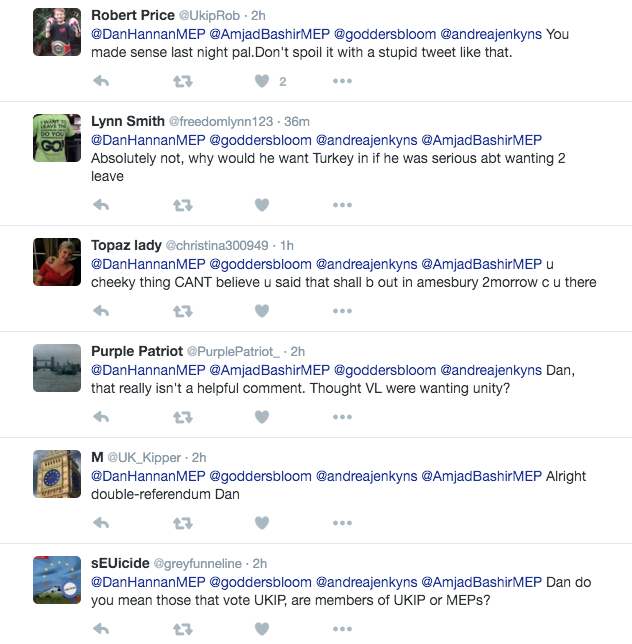 And with that fell swoop, he smeared nearly 4 million people all in one go. So learn your lesson Kippers: don’t work with Vote Leave.

And I’m not really saying anything that controversial when I say that. Remember when the Times disclosed: “Cabinet ministers who want to campaign to leave the EU have been urged by No 10 to avoid working with Go, the organisation backed by the Ukip donor Arron Banks, and to side instead with Vote Leave, which is run by a controversial former Tory adviser.”

What’s the difference? Work with UKIP, not Vote Leave. And did you ever question WHY Downing Street was effectively backing Vote Leave as the official campaign? Do you really think they WANT the tougher opposition?

Oh and by the way this is the same Amjad Bashir who, as recently as January 11th 2016 was “uncommitted” on the issue. See below. Hardly a stalwart. 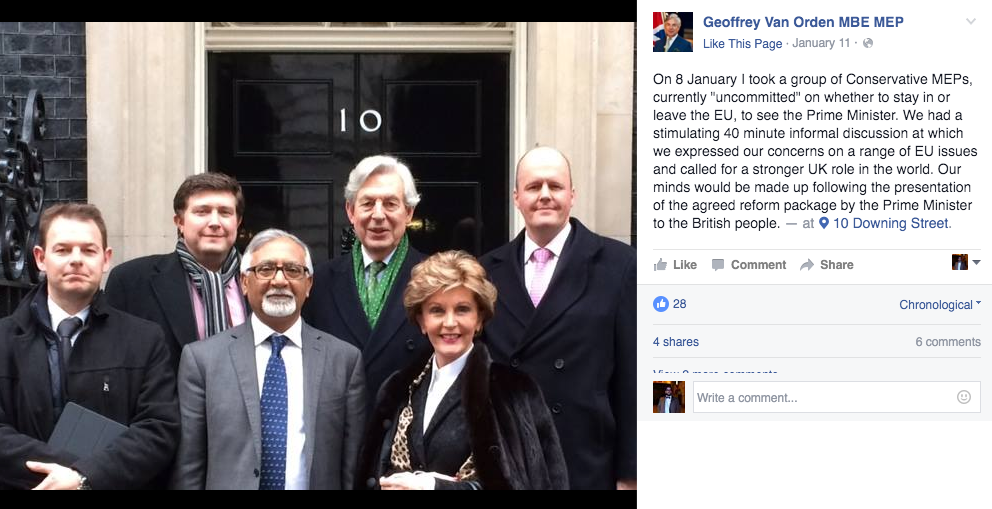 And then you have Gisela Stuart MP, a Vote Leave-supporting member of parliament who implied to a German newspaper that UK Independence Party voters were “fanatics” and “oddballs”.

Ms. Stuarts comments to FAZ.net reveals a disdain from the Vote Leave group that I’ve warned about for some time. They intend to use Kippers to deliver leaflets, but want UKIP nowhere near their visible campaign, and they intend to take credit if Leave wins, or blame Nigel Farage if they lose. I’m telling you this now. Don’t make me say I told you so again.

Speaking to German paper FAZ, Ms. Stuart said of “standing in line with Nigel Farage”: “No one should say: ‘oh, there are those people from UKIP’, this is therefore a matter for fanatics. I consider myself as a relatively rational politician in the middle. Advocating a proposed referendum on United Kingdom membership of the European Union is a legitimate, honest attitude, it does not mean that one is a oddball.”

Breitbart London asked Ms. Stuart about the comments, but has, as yet, received no response. Strange to leave that unanswered. Or did she just think no one in the UK would read her comments? Well I did, and frankly, her acceptance of the premise that UKIPers are “fanatics” and “oddballs” is unhelpful. The two examples in 24 hours proves the establishment campaign are collectively hostile to UKIP voters.

“But Raheem we’ve all got to work together!”

You’re being a cuck. You can still work with Grassroots Out, Leave.EU, and UKIP themselves. Between them, they’ll spend £5.4m at this referendum. Not far off Vote Leave’s £7m.

Let the Tories and Amjad-Come-Latelys bounce around with Boris, Dan, and Gisela. Real UKIPers should have nothing to do with Vote Leave.

(P.S. Yes, this issue is MUCH bigger than party politics, you don’t need to remind me of that. Which is why it’s such a shame Vote Leave figures have basically ostracised UKIPers).