A number of bars in Denmark are reporting daily harassment by migrant sharia patrols who claim the streets they operate on are “sharia zones”, vandalise businesses, and even shout abuse at government ministers in the streets.

The reports of violence and intimidation are coming out of Nørrebro, a suburb of the Danish capital Copenhagen, where the local trade association is considering employing “peace guards” to protect business and punters. Local bar and nightclub owners have reported having their windows smashed, customers attacked, and even death threats being made against them by “immigrant origin” Sharia patrols because they serve alcohol.

Speaking out against the abuse, café owner Heidi Dyrnesli said of one recent attack: “Some men came into the bar and shouted that all guests had to leave. They said the area belonged to them and that Nørrebro is now subject to sharia and drinking alcohol is forbidden.”

Businesses have been told they have to pay money to the migrant gangs in return for protection in addition to the alcohol bans, and failure to comply has led to death threats. One local speaking to Norwegian newspaper Nettavisen named as Mohammed Ahmed  said some 60,000 kroner (£6,300) had been demanded of him and his business.

Mr. Ahmed said the immigrant gangs were deliberately creating disruption so they could extract protection money. He said the gang had once kicked down the door and threatened to “flay me alive”, and that he lived in fear of the day they carried out their threats.

The paper also reported the experience of a journalist who went to investigate the allegations and had a knife pulled on him. He was told to “go to hell” by an individual in the suburb.

Local businessmen have spent “months desperately trying to get police in Copenhagen to take action” against the Sharia gangs without luck, reports Denmark’s TV2. Law enforcement seems to not be taking the problem seriously, with Berlingske reporting a police spokesman who said “we do not consider it to be a big problem”, and called the perpetrators “louts” with no religious motivations. 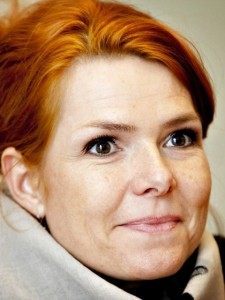 Rather than arresting those responsible — which police complain is difficult because by the time they respond to crimes the perpetrators have already fled — police are using “dialogue” to end the attacks instead. A spokesman said: “We are in dialogue with the young people and the community. With dialogue, we expect to bring about order”.

Despite these remarks, others are taking the threats more seriously. Danish anti mass migration politician Inger Støjberg, who became the government’s immigration minister last year, visited the area on Wednesday to find out about the intimidation herself.

The minister, who has slashed benefits for non-Danes and even took out adverts in foreign newspapers telling would-be migrants to not bother travelling to Denmark, ended up trading insults with local left-wingers and migrants today, who were determined to interrupt her visit. Two young Danish women shouted insults at the minister, including “Nazi” and “fascist”.

The minister challenged them to repeat their comments, but they walked away. The pair are likely to be charged with disturbing the peace by swearing at a government minister by police, reports TheLocal.dk.

Others described as “non-ethnic Danes” also voiced their disapproval at Ms. Støjberg’s strong policies on mass migration. The minister was heard to shout back at the disaffected migrants: “Get a job!”

In a Facebook post about her visit, the minister had this to say to the foreigners: “To the young immigrants who are devastating  Nørrebro: behave yourselves!

“You live in the greatest country in the world. Opportunities lay right before you. So stop rampaging, the threats and yelling”.

“You claim this is a sharia zone. I can guarantee it is not, and never will be”. The minister told the truculent migrants that “you will get a fair trial when the police get hold of you”, which is more than they could expect under sharia law.