On Monday night, Europe witnessed yet another brutal Islamist terror attack committed by a killer who admitted to police he was doing it in observance of Ramadan, yet mainstream media coverage has been muted. 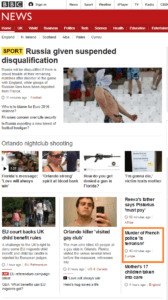 As Tuesday progressed, information filtering out about Larossi Abballa made clear that he was not a mentally unhinged lone wolf, but a dedicated Islamist that the French government let slip through their fingers.

Yet despite the fact the state of France is presently at their highest terror alert, the Ramadan-inspired terror attack which saw a senior police commander murdered and the throat of his police officer wife slit has attracted remarkably little media attention.

Top of the news agenda globally remains the Orlando terror attack and the reaction of the gay community to the targeted attack at the Pulse nightclub. The significance of this attack cannot be underestimated — at 49 dead it is the deadliest such attack in American history. Yet that the cold-blooded Islamist murder of two police officers in Europe couldn’t command story priority on major mainstream newspaper sites and rolling 24-hour news above stories like football hooliganism and evidence being given in Pretoria for the Oscar Pistorius case is remarkable.

Data analytics of searches for divergent terms confirms this lack of exposure in the mainstream media engenders a lack of response from the public. Even after three days after Orlando, a terrorist attack being live cast by the killer from a European capital failed to beat the day’s sporting news.

It is clear that a calm, rational Muslim — that much is clear from the 13 minute Facebook live-stream he posted from the scene of the crime before he was gunned down by police, and his prior terrorist activity — killing in honour of Ramadan is off message. It is damaging to the narrative that Islam is a peaceful and welcome addition to Western culture.

Yet the undeservedly little coverage this horrific attack has received does a disservice to Western democracy. Especially in the run-up to Britain’s referendum on continued membership of the European Union for which national security and mass migration are key issues, serving the public the facts is crucially important.