Black Lives Matter (BLM) supporters have claimed the deadly terrorist attack in France was “to make people lose attention” [sic] in their movement and focus on “white” lives instead.

“Ok I’ve come to the conclusion that what happened in Nice was to make people lose attention off [sic] #BlackLivesMatter and focus and unite against us”, wrote Twitter user Semsa, who is based in London but says “Egypt’s the motherland”. She has since made her account private.

“Don’t #PrayForNice we are fighting a civil war against whites. #BLM”, tweeted Franklin Omar, an activist who also appears to be from London, and describes himself as a “Muslim”.

It’s sad to see where #BLM finds itself these days. I used to be a huge supporter… you guys lost your way.https://t.co/NLS462nymc 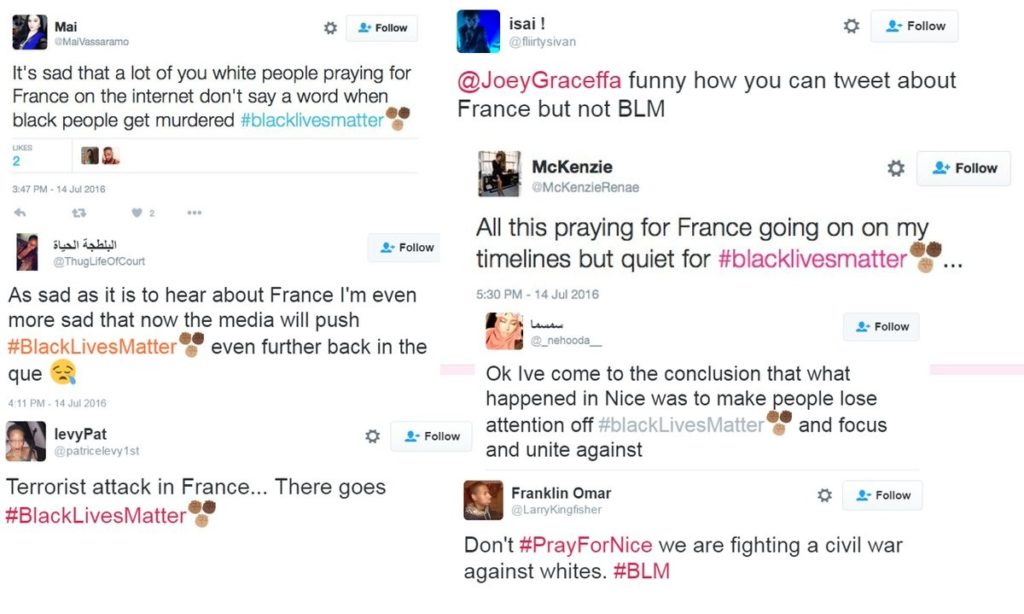 “Your women are ours now. Allah (pbuh) has promised them to us. Piss off white crusader, watch as Rome burns”, and, “lol we’ve already won Europe, USA can’t do anything against the caliphate white pussy, USA men cant fuck, good luck.”

“As sad as it is to hear about France I’m even more sad [sic] that now the media will push #BlackLivesMatter even further back in the que [sic]”, wrote a Los Angeles-based BLM activist.

Hacktivist group Anonymous and Black Lives Matter had announced a so-called “day of rage” to be held today, the day after the deadly terrorist attack in southern French city.

“Once again we are calling upon the citizens of the United States, in conjunction with the Black Lives Matter movement as well as other civil rights activists, to participate in a day of action against the injustices of corrupt officers,” Anonymous declared in a video.

Last night, at least 84 people died in Nice, including children, after a lorry slammed through a crowd celebrating Bastille Day, France’s national day.