US President Donald J. Trump and UK Prime Minister Theresa May have reaffirmed their commitment to the special relationship between their two countries, with the new President telling the White House press conference that “Brexit is going to be a wonderful thing for your country”.

Speaking in a questions and answers after the two leaders made a joint statement on the renewal of the special relationship at the White House this afternoon, President Trump took a question from the British press on Brexit, and came out strongly in favour of the vote and Britain liberating itself from what he called the “consortium” European Union (EU).

President Trump said: “We will be talking to your folks about Brexit, [which is] an example of what was to come. I happened to be in Scotland… when Brexit happened, and we had a vast amount of press there. The day before, I said ‘Brexit is gonna happen’, and I was scorned for making that prediction”.

Elaborating on his own experience with the power bloc in business, President Trump said he’d had no problems dealing with individual European nations, but “getting approval from the group, I call them the consortium, was very tough. But I think that Brexit will go down as having been a fantastic thing for the United Kingdom. I think it will be a tremendous asset, not a tremendous liability”. 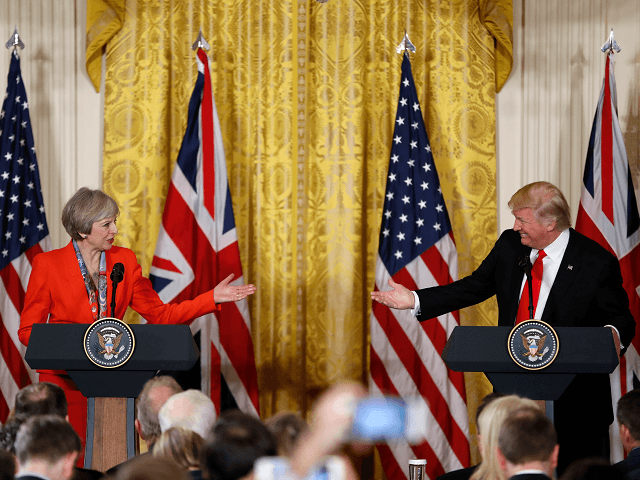 At the conference following an hour long meeting between the two, Trump said he was “honoured” to have May as the first official visit from a foreign leader. He continued: “The special relationship between our two countries has been one of the great forces in history for justice and for peace.

“Today the united states renews our deep bond with Britain, military, financial, cultural, and political. We pledge our lasting support to this most special relationship.

“Together America and the UK are a beacon for prosperity and the rule of law. That is why the US respects the sovereignty of the British people and their right of self determination. A free and independent Britain is a blessing to the world and our relationship has never been stronger.

Addressing May, Trump said “we look forward to working closely with you as we strengthen our mutual ties in commerce, business and foreign affairs.

“Great days lie ahead for our two people and our two countries.

“On behalf of our nation I thank you for joining us here today – it’s a really great honour. Thank you very much.”

Responding, May thanked the President for inviting her “so soon” following his inauguration, adding that she was “delighted” to congratulate him on a “stunning” election victory.

“As you say, the invitation is an indication of the strength and importance of the special relationship. A relationship that is based on the bonds of history, of family, kinship and common interests,” she said.

She expressed the wish of Her Majesty the Queen that Mr Trump and the First Lady would pay a visit to the United Kingdom on an official state visit later this year, an invitation she said the President has accepted. 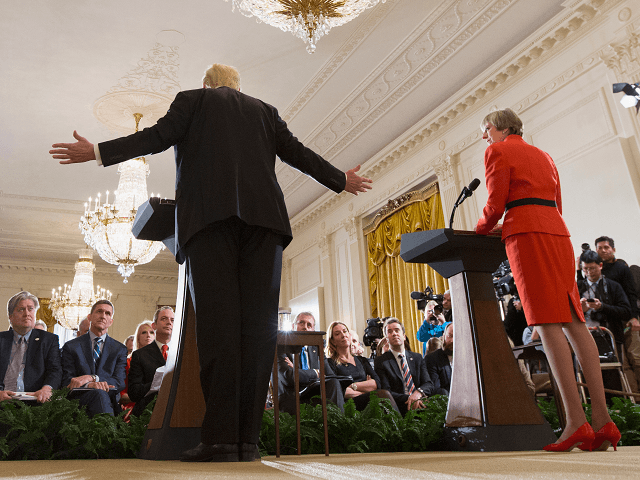 United States and United Kingdom to work together on key issues

Turning to their meeting, May said the two leaders had discussed a “range of topics” on which there was “much on which we agree”.

Those included foreign policy, and a wish to “take on Daesh [Islamic State] and the ideology of Islamic extremism wherever it’s found.

“Our two countries are already leading” that effort she said, and “making progress”, particularly in cyberspace.

On defence and security, May said the two US and UK were “united in our recognition of NATO as the bulwark of our collective defence, and today we’ve reaffirmed our unshakable commitment to this alliance,” adding that President Trump had confirmed he is “One hundred per cent” behind NATO.

“We were also discussing the importance of NATO continuing to ensure it is as equipped to fight terrorism and cyber warfare as it is to fight more conventional forms of war,” she added.

Describing the defence partnership between the US and UK as the “The broadest deepest and most advanced of any two countries,” May noted: “the President and I are ambitious to build on this relationship.”

She continued: “I’ve agreed to continue my efforts to encourage my fellow European leaders to deliver on their commitments […] so that the burden is more fairly shared. Only by investing properly in defence can we ensure we’re properly equipped to face our shared challenges together.

“Finally, the president and I have mentioned future economic cooperation and trade,” which is “already worth over £150 billion a year

“Together we’ve around $1 trillion invested in each other’s economies.”

Confirming that work was already going ahead on exploring ways the US and UK can start to forge trade links, May said “I’m convinced that a trade deal between the US and UK is in the national interest of both countries and will cement the crucial relationship that exists between us, particularly as the UK leave the EU and reaches out to the world. 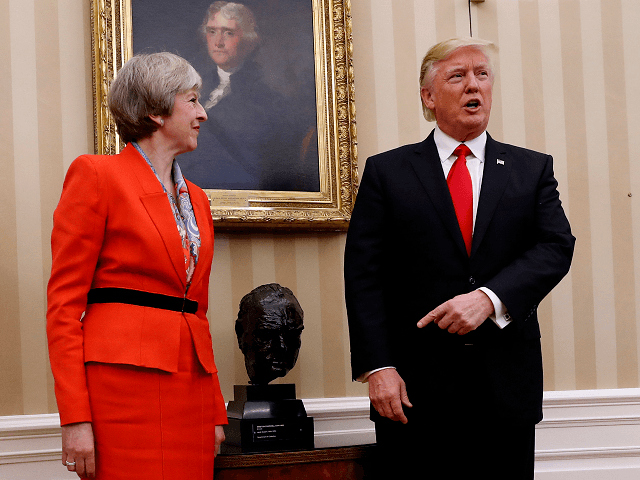 “Today’s talks,” May said, “are a significant moment for President Trump and I to build our relationship and I look forward to continuing to work with [him] as we deliver on the promises of freedom and prosperity for all the people of our respective countries.”

Arriving at the White House for her first meeting with Donald Trump at mid-day on Friday, May declared the U.S. and U.K. can lead the world “together again”.

As May was greeted by Trump, the White House in turn declared the UK its “premier ally”.

Ushering her into the Oval Office, Trump showed her the bust of Winston Churchill which has been reinstated to the room having being removed during the Obama administration.

Gesturing toward the bust he said: “This is the original in many, many ways – and it’s a great honour to have Winston Churchill back.”

May replied “Thank you very much Mr President” and the two leaders then shook hands.

The first world leader to meet Trump since his inauguration, May said the special relationship would be “renewed for a new age”.