A petition demanding U.S. President Donald J. Trump is invited to the UK for an official state visit has passed 100,000 signatures, the number at which it will be considered for debate in Parliament.

“Donald Trump should be invited to make an official State Visit because he is the leader of a free world and U.K. is a country that supports free speech and does not believe that people that appose our [sic] point of view should be gagged,” the petition demands.

It was launched just Monday by Alan Augustus Brown on the government’s official petition website and will be available to sign for six months.

The petition comes after one titled, “Prevent Donald Trump from making a State Visit to the United Kingdom”, achieved more that a million and a half signatures.

The data revealing where supporters of both the anti-Trump and pro-Trump petitions live shows those against the new president are highly concentrated in and around London, whereas supporters of Mr. Trump’s visit are distributed across England. 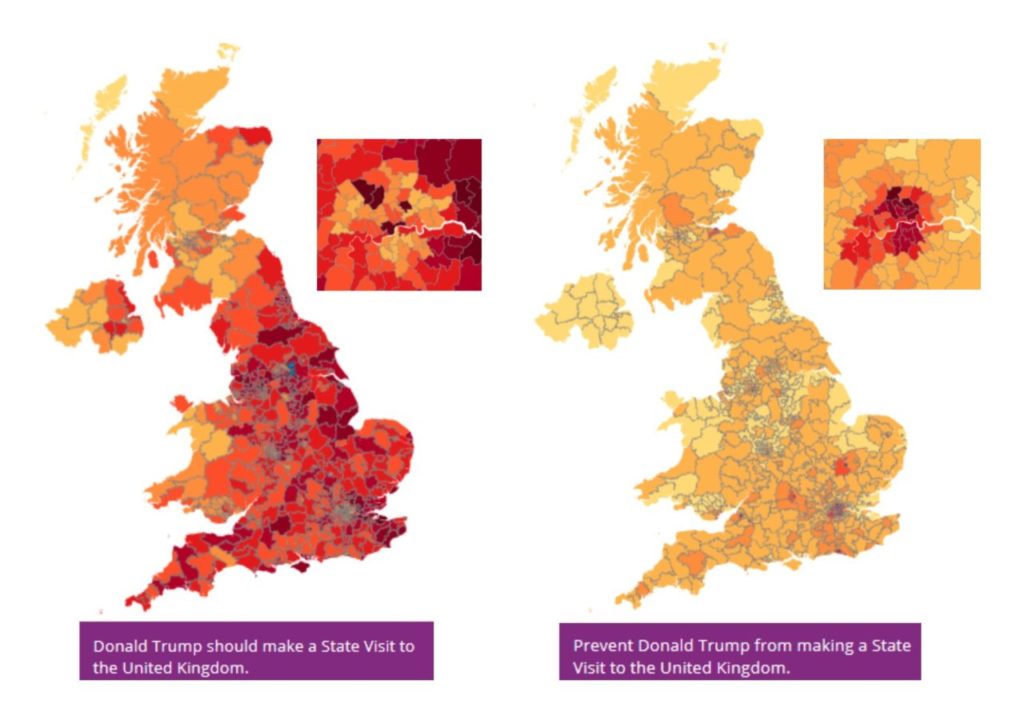 The new president’s 90-day pause on immigration from a list of terror-linked states, compiled by the Obama administration, has caused lively debate in the UK.

Monday, opposition MPs said the policy was “racist” and Foreign Secretary Boris Johnson told Parliament the government “disagreed” with it and had reacted “energetically” to it. However, he refused to criticise Mr. Trump and his administration.

Prime Minister Theresa May, too, has avoided directly attacking her American ally and has insisted the planned official state visit will go ahead regardless of opposition.

Anti-Trump protestors took to the streets across the UK Monday night, including in Manchester, Glasgow, Cardiff, Newcastle, Sheffield, Oxford, Cambridge, Brighton, Leeds, Liverpool, and several other towns and cities.

“Donald Trump has been president for only a few days, and look at what he is doing,” said Mrs. Abbott, representing the Labour leader Jeremy Corbyn.

She added: “We need to resist the Islamophobia and scapegoating of Muslims, we have got to resist it whether it is in the United States or here in the UK.”