BUDAPEST, Hungary (AP) — The trial of 11 men indicted in the case of 71 migrants who died in the back of a refrigerated truck in 2015 started in Hungary on Wednesday.

Prosecutors have asked for life sentences for the four alleged human smugglers who are facing murder charges. The other defendants are facing shorter prison terms and expulsion from Hungary.

Migrants from Syria, Iraq and Afghanistan were among those who suffocated in the back of a refrigerated truck with Hungarian license plates abandoned in the emergency lane of the A4 highway near Parndorf, Austria, near the Hungarian border, on Aug. 27, 2015.

The victims, who died while the truck was still in Hungary, included 59 men, eight women and four children.

Ten of the 11 defendants were present at the court in Kecskemet, the central Hungarian city where the smugglers purchased the truck and began their journey to Hungary’s border with Serbia to pick up the migrants. One defendant is a fugitive being tried in absentia. 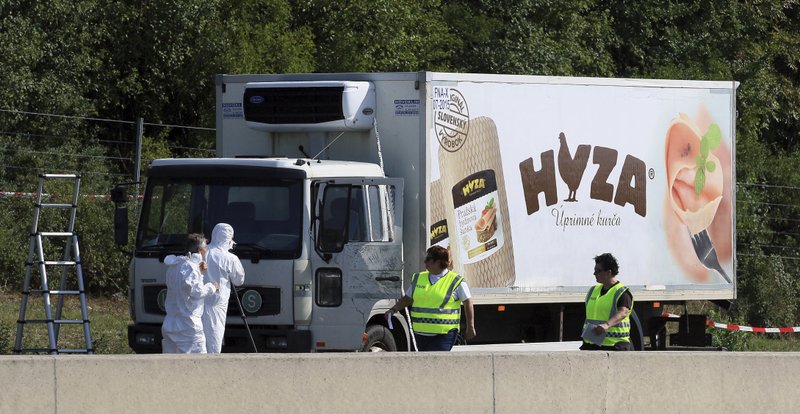 In this Aug. 27, 2015 photo, investigators stand near an abandoned truck on the shoulder of Highway A4 near Parndorf, Austria, south of Vienna. (AP/Ronald Zak,file)

The migrants were packed into the truck near the village of Morahalom before heading toward Austria.

“Approximately half an hour after the departure, the migrants indicated with bangs and cries that they were running out of oxygen,” prosecutors said ahead of the trial, adding that the driver was told to ignore their pleas by his Bulgarian boss. “As a result, the 71 victims locked in the load area suffocated in horrendous conditions three hours after the departure,” while still in Hungary.

The defendants include nine Bulgarians, one Bulgarian-Lebanese and one Afghan. They allegedly smuggled some 1,200 people from the Hungary-Serbia border to Austria or Germany in 2015.

At least some 400,000 migrants passed through Hungary in 2015, nearly all on their way to Germany and other destinations in Western Europe. The flow of people ebbed considerably after September 2015, when Hungary built razor-wire fences on its southern borders with Serbia and Croatia.