President Donald Trump has praised Poland for their commitment to NATO spending, holding them up as an example to other members who despite years of opportunity have failed to meet their treaty obligations in a joint press conference in Warsaw, Poland Thursday.

Polish president Andrzej Duda opened a blockbuster press conference with U.S. President Donald Trump by emphasising the strong, long-standing friendship between their countries and their planned cooperation on international security.

President Duda, whose conservative Law and Justice Party (PiS) was elected on a wave of patriotism in 2015 after adopting a robust stance against mass immigration and elite globalism, described Poland and the United States as “loyal partners” who would co-operate on “many different areas within the NATO alliance”.

Duda said they discussed the importance of the Polish-American partnership in securing NATO’s eastern flank, his country’s decision to purchase the Patriot missile system, and the situation in Ukraine.

The Polish premier stressed how seriously President Trump takes security, and praised his strong support for Polish-Americans and their historic contributions to the United States. 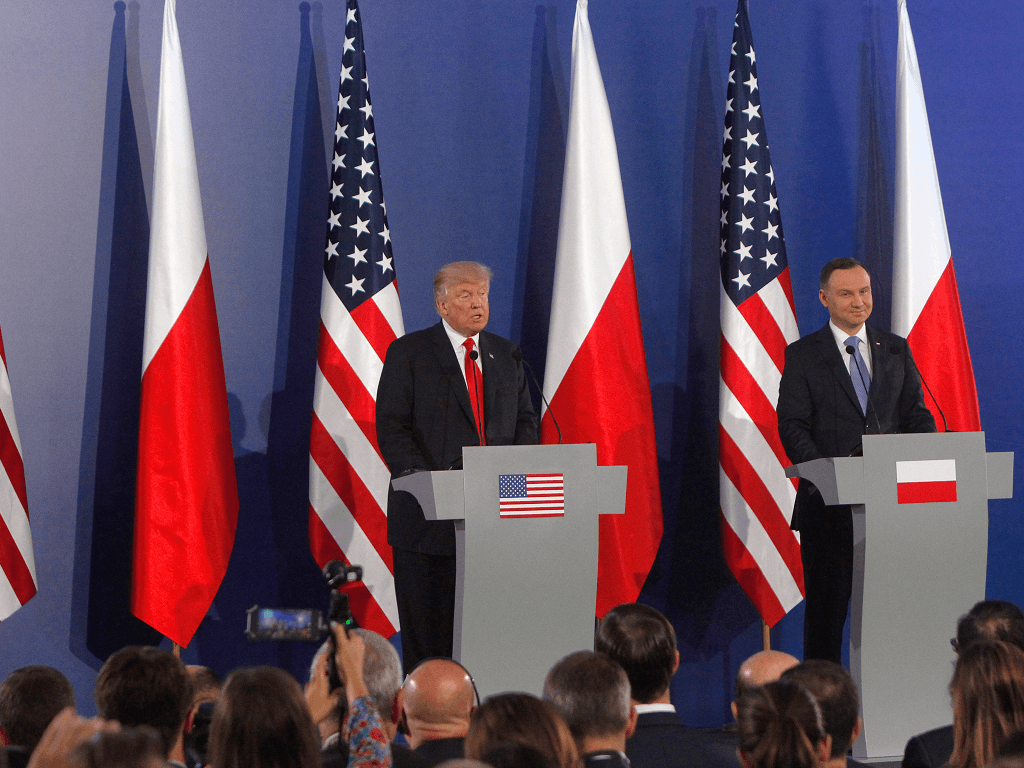 “Thank you for noticing the contribution of Polish Americans and and their contributing to the prosperity of the United States,” he said.

Immediately after his introduction, President Trump thanked the Polish people for a warm welcome to their “beloved homeland”, reiterating President Duda’s sentiments on the strong relationship between their nations.

“We’ve never been closer to Poland than we are right now,” he declared.

“Poland has been a great friend, ally and a partner with respect to our military. We fought shoulder to shoulder in many different encounters. We are particularly grateful for the action Poland has taken to defeat ISIS and other terrorist organisations. Poland has been right there for us,” he stressed.

President Trump also congratulated Poland on its recent election to the United Nations Security Council, and expressed his appreciation for their commitment to meet and even their NATO spending obligations.

President Trump has not been shy in criticising countries in Europe which have failed to meet their obligations, and issued the same strong message in Warsaw.

“It is past time for all countries in the NATO alliance to get going and get up to their obligations, but I can say that Poland has been right there,” he said, noting that money has been “pouring in” since he adopted a robust posture at the G20 summit.

President Trump explained that strength was needed to tackle not only radical Islam, but the increasingly dangerous and erratic communist dictatorship in North Korea.

“President Duda and I call on all nations to confront this threat,” he said.

There was also cause to highlight the success of the United States in exporting supplies of Liquified Natural Gas (LNG) to Poland, with President Trump pointing out that his country stood ready to help “Poland and other countries to diversify their energy supplies so [they] can never be held hostage to a single supplier”.

He reminded listeners that his administrations wants “reciprocal” trade relationships going forward, however.

“We don’t have too many of them. The United States has made some of the worst trade deals in history, [but] that’s going to change,” he asserted.

“The friendship between our people dates back to the American revolution,” he concluded, saying that he looked forward “to talking about these bonds of faith and freedom” in an address to the huge crowds which have gathered to hear him later.

President Trump joked self-deprecatingly that they had turned out for President Duda, rather than himself.

“Thank you again for welcoming Melania and myself to your homeland. Together we can make the partnership between our nations stronger than ever before. Special people, special place and it’s an honour to be here.”