Jason Osamede Okundaye, Ethnic Minorities Officer for Pembroke College at the University of Cambridge, is being investigated after cheering on violent ‘Black Lives Matter’ rioters in an extraordinary anti-white online rant.

Head of @Cambridge_Uni equality group @jasonosamede clearly has a limited understanding of equality. Not related to #DianeAbbott is he? pic.twitter.com/43lwGpAfpC

Despite making a commitment to “ensuring a zero-tolerance approach to instances of racism and racial harassment” on his Pembroke College profile, the 20-year-old appeared to revel in the racial violence overtaking London: “Watching these middle-class white people despair over black people protesting in their colonised Dalston is absolutely delicious,” he jeered.

Okundaye also commented “Just catching up on the rioting, excellent stuff, smash everything #NoJusticeNoPeace” and shared a picture captioned ‘You’re doing amazing, sweetie’ with the text “Me @ these rioters in Dalston #NoJusticeNoPeace” — as agitators threw Molotov cocktails, fireworks and other missiles at police, attacked members of the public, and even attempted to force their way into the cabin of a terrified delivery driver.

A lorry drove through a barricade made by protesters angry at the death of Rashan Charles amid violent scenes in east London pic.twitter.com/OR9QtP92XY

Controversial Hackney MP and Shadow Home Secretary Diane Abbott was also accused of fanning the flames, after joining protesters on the streets and defending their “understandable anger and upset” — although she did concede that “violence is not the answer”.

Standing alongside Rashan Charles’s father, Esa, she said: “That is the call that every parent dreads. The call that tells you that your young child has died in those sorts of circumstances.”

CCTV footage appears to show the deceased, a 20-year-old man, being brought to the ground with by a police constable after swallowing an object, thought to be a package of drugs. 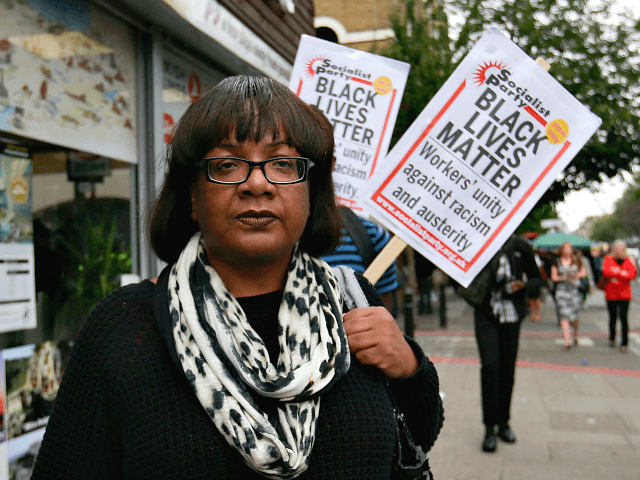 Charles “became unwell” shortly afterwards, and passed away despite the efforts of police, paramedics and staff at a nearby hospital.

Abbott has previously been forced to apologise for making remarks about white people which were interpreted as racist herself, tweeting “White people love playing ‘divide & rule’. We should not play their game” in 2012.

The self-proclaimed socialist was also grilled over apparently racist comments about the superior dedication of “West Indian mums” to their children in 2010, which had been intended to justify her decision to send her son to an expensive private school despite having previously described such actions as “indefensible”.