British universities must take action to halt a growing climate of censorship on campus, Baroness Ruth Smeeth has said, warning that authorities are pandering to the demands of “ever more censorious students.”

The crossbench peer slammed lecturers and university authorities for “bowing to students’ whims’ over demands for “trigger warnings” and “safe spaces”  — practices she said have “already infected” British institutions, after wreaking havoc on the international reputations of universities in the U.S.

Baroness Deech, who served as the first independent adjudicator for higher education  — the highest office dealing with student complaints  — before retiring in 2008, asserted that “freedom of speech within the law should be protected, especially in universities.

“Yet the university authorities are complicit in allowing the free exchange of ideas to be closed down, and students are ever more censorious,” she wrote in a letter to The Times. 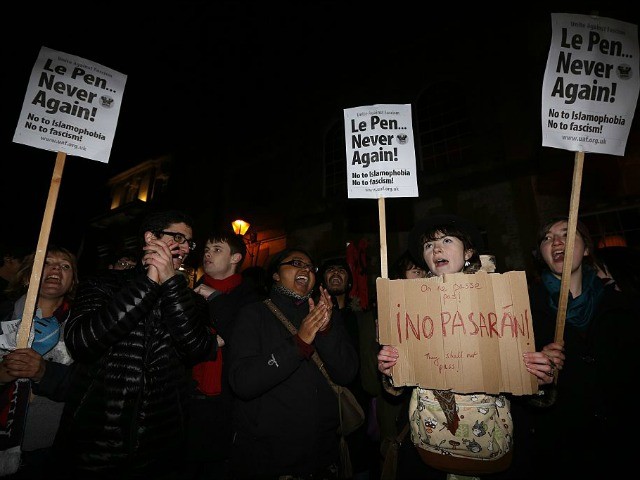 Protesters against the participation of French politician and president of the Front National, Marine Le Pen, in a panel discussion at Oxford University’s debating society / JUSTIN TALLIS/AFP/Getty Images

This has resulted in a situation where debate over controversial topics relating to issues like feminism has been blocked by student unions and by protests, according to the former senior proctor at Oxford University and Principal of St Anne’s College,

“On the other hand extremist speakers are not being challenged because the students themselves are silencing the challengers,” Baroness Deech pointed out.

She said: “There is a discriminatory academic boycott of Israel — and some Israeli or Jewish students do not get to enjoy the safe space that the National Union of Students guarantees to others.”

In November, Breitbart London reported on the situation at a prominent London university with a strict “safe space” policy-enforcing student union (SU), which was accused of banning a liberal Muslim journalist from speaking while allowing a hardline Islamic preacher who has glorified violent jihad to address students on campus.

The School of Oriental and African Studies’ (SOAS) SU defended the decision to host Abdur Raheem Green  — who has attacked Jews, supported wife-beating, and preached that “Islam teaches its followers to seek death on the battlefield”  —  citing a commitment to “free speech”.

But in 2015, Mona Eltahawy, who advocates a “sexual revolution” in the Islamic world, said the SOAS SU blocked her from speaking, as she might “offend” Muslim students.

Law undergraduates at Oxford University last year were advised that lectures on sexual violence can be “distressing”, and given the “opportunity to leave”.

Trigger warnings – the notion that students should be warned before classes which contain material or topics that could upset students – have become increasingly widespread at British universities.

The practice echoes a trend in America, where student governments have demanded trigger warnings on works of literature they said could trigger readers who have experienced racism, colonialism, religious persecution, violence, suicide, and more  — in a list which ranges from The Great Gatsby to Shakespeare.